‘There’s a reason God gave Africa sunlight,’ according to AfDB president Akinwumi Adesina. Speaking at the UN Climate Action Summit last year, Adesina confirmed the pivot towards renewable energy in the bank’s funding strategy. Earlier last year, the AfDB released figures showing that between 2016 and 2018, 95% of its investments in power generation were in renewables projects.

Adesina says that the AfDB will effectively scrap involvement in coal generation. ‘Coal is the past, and renewable energy is the future,’ he said. The AfDB is currently rolling out a US$500 million green baseload scheme and expects its initial investments to leverage another US$5 billion from the private sector.

The AfDB’s decision to abandon coal is in line with the choice made by banks and pension funds around the world in recent years. In March, South Africa’s Standard Bank announced that it had set ‘restrictive criteria’ on future coal-power funding.

Last year, Standard Bank shareholder activists had attempted, unsuccessfully, to pass a resolution requiring full disclosure of all investments ‘that expose it [the bank] to climate change risk’. Two of South Africa’s four main project finance banks, First National and Nedbank, have also moved in the same direction. While matters of conscience are no doubt involved, one of the main variables that has shifted in recent years is that renewable-energy finance has gone a long way towards proving its cost viability.

However, these commitments to renewable energy come at an uncomfortable time for the industry. Some analyses find that investments in renewable energy are falling, at least in monetary terms. According to an estimate by research consultancy Bloomberg New Energy Finance (BNEF), investment in renewables in sub-Saharan Africa last year (excluding South Africa) was worth US$2.1 billion, down from US$2.8 billion in 2018.

There are a number of reasons for the lower flows of investment capital – and not all of them are negative. One is the removal of subsidies in the US and China. But Zhai and Lee argue that more important is the fact that the hardware used by both solar PV and wind generation has become steadily cheaper over the past decade. The cost of installed solar capacity has come down from US$4 621/kW in 2010 to US$1 210/kW in 2018, a reduction of 73.8%. The trend has been more muted in wind power but has also been downward. In other words, Zhai and Lee suggest, less investment is now required to install the same level of renewables capacity. They note that despite the decline in investment from 2017 to 2018, installed new capacity was about the same in both years (171 GW).

However, in Africa, some of the smaller deployments of capital may well be related to market weaknesses. BNEF argues that the original power purchase agreements (PPAs) in some African cases are proving restrictive. As capital costs have plunged, some African projects have been hamstrung by exactly the sort of ‘legacy’ issues that the continent was expected to avoid. ‘Governments are struggling to afford existing PPAs,’ BNEF argues. It points out that some African governments, notably South Africa and Ghana, are attempting to renegotiate earlier contracts.

The wider African market for renewable-energy finance is, however, young. South Africa stands out as a market further into development. It has deep savings resources, a sophisticated financial sector and a much larger on-grid utility-supplied system than any other country. That grid is already drawing on renewables, and the South African experience has insights that are of value to the continent more generally.

Perhaps the most fundamental insight is that it takes time to build confidence in the new technology. When South Africa established its Renewable Energy Independent Power Producer Procurement programme (REIPPPP) in 2011, commercial banks were ‘much more cautious, learning as the programme was rolled out’, says Rentia van Tonder, head of renewable energy, power and infrastructure at the Standard Bank Group.

‘One of the main developments is that funders have become much more comfortable with the technology and the ways in which risk is allocated,’ she says. The role of commercial banks to date remains mainly through limited recourse project finance, but they are becoming more comfortable with new funding approaches as renewable energy establishes a firm track record in South Africa.

‘When we started with the REIPPPP, debt-equity ratios were in the region of 60% to 70%,’ says Van Tonder. The high proportion of equity investment required from project developers was an indication of considerable uncertainty on the part of the financiers. Van Tonder notes that ‘the ratio has now moved up to closer to 80%, which indicates that funders have become more comfortable with the technology and the performance of established projects’.

In simple terms, banks are assessing the risk based on the project parameters, sponsors and risk allocation, accepting a lower equity contribution where appropriate for renewable projects, because they are more confident that they will recoup their investments.

‘Most of the established projects [in South Africa] are performing relatively well aligned with base case projections. Overall, risk margins have come down over the four bid rounds,’ says Van Tonder. ‘We’re comfortable with the way things have developed.’

Darren Musso, co-head of infrastructure finance at Rand Merchant Bank, agrees that solar, wind and biomass generation are now much better understood and established. ‘The technology is proven and is now mainstream,’ he says. ‘When it comes to debt finance, we don’t hesitate on technological grounds. On the other hand, less-proven technologies like wave and tidal are still the territory of venture capitalists, not commercial banks.’ 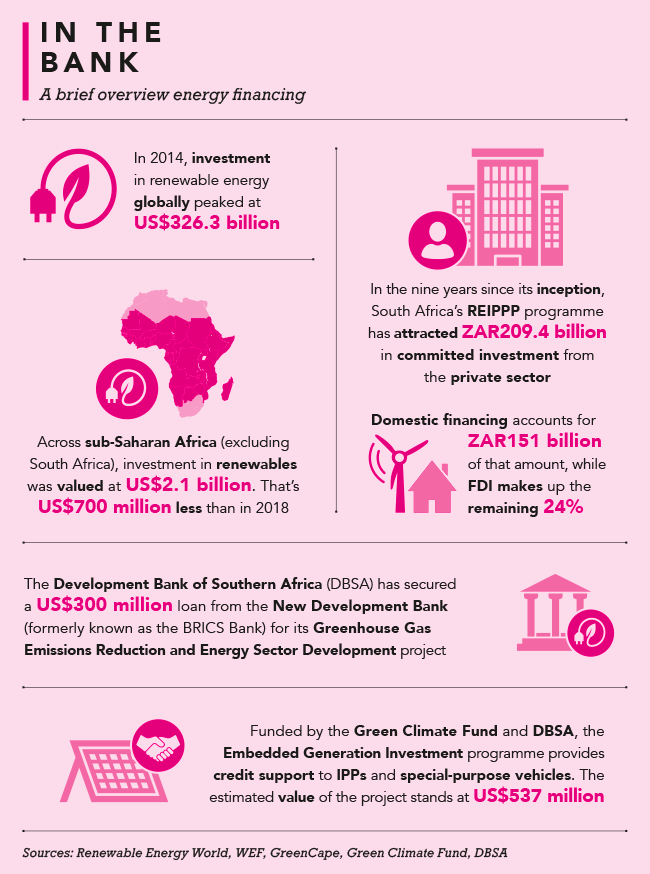 Musso says that solar PV and wind are now cheaper than any other form of new-build generation. ‘In South Africa, the eagerly expected next round of the renewable energy procurement programme is widely expected to deliver electricity prices south of 50c/kWh,’ he argues. Musso says that recent Eskom figures show that the operating and fuel costs of coal-fired power stations is 45c/kWh, which means that when ‘capital expenditure, financing costs and investor returns are factored in, the cost of coal generation is significantly higher’.

South Africa’s REIPPPP has so far attracted initial investment capital of ZAR209.4 billion across 102 projects. But initial financing is only an early indicator of market strength. Early funders such as banks do not see the actual running of power stations as a part of their business and will exit their investments as more risk-averse funders, including South Africa’s huge retirement funds, become involved.

‘Getting savings-industry players like pension funds involved has been a key objective from the start,’ says Van Tonder. The ability of banks to engage in renewables programmes is limited by their need to comply with the Basel protocols on prudential capital requirements. In South Africa the need is for the country’s powerful ZAR2.5 trillion savings industry to step up to the plate. Van Tonder confirms that this has happened on a wide scale. Standard Bank has ‘essentially sold about 50% of our original REIPPPP exposure’.

Yet, the rest of the continent doesn’t have this institutional depth. This is only one of the differences. Musso points out that ‘the rest of Africa does not have large interconnected grids’. This means that almost all financing is on a project basis, and managing risk is a more complicated and less certain business than it is in more established markets. He also argues that it ‘means that generation can be closer to load centres, which is the way the industry appears to be developing’.

This is where the potential of renewable energy to leapfrog legacy infrastructure is especially important. ‘In South Africa, power is generated mostly in Mpumalanga, close to the coalfields. This means that it has to be transmitted long distances, which is expensive and wasteful,’ says Musso.

The creditworthiness of the main buyer of electricity or ‘off-taker’ is a critical variable. But this has not been an issue in South Africa, thanks to the system of formal PPAs, which underpins financial closures in renewable-energy projects. ‘We don’t take on Eskom risk,’ says Van Tonder. But this is not the case in most of Africa, where utilities are often struggling.

BNEF puts the problem bluntly. ‘Off-taker risk remains a central concern for developers across the region. Ailing utilities struggle to improve their finances, and governments often find it hard to raise subsidised retail rates in the face of popular opposition,’ the research consultancy argues.

The development of new technologies is seldom linear. It is thus only to be expected that as Africa installs increasing renewable-energy capacities, new problems will arise, some of them created by the new projects themselves. The AfDB’s Adesina has outlined the intention to build ‘the largest solar zone in the world’ in the Sahel.

With that sort of commitment, the deepening of the market for renewables finance seems all but inevitable.