Just north of Lake George in western Uganda, there’s a town called Kasese. With a population of about 100 000 (according to the 2014 census), it’s one of the bigger towns in the area, having grown around the local copper and cobalt mines. It’s a pretty town, with the Queen Elizabeth and Rwenzori Mountain national parks on its doorstep. Just don’t drink the water.

Uganda’s National Agriculture Research Institute found high levels of copper, zinc and cobalt in the soil around Kasese – so high that many locals blame the copper levels for turning the river stones brown and for causing stomach illnesses among local children. Water quality is a common problem in Uganda, where about 8 million people live without access to safe drinking water, and 4 500 children die each year from drinking contaminated water. Yet, if you look at it, the water appears fine – and there’s plenty of it in the lake and its surrounding waterways.

‘That’s the thing about water,’ says Chetan Mistry. ‘It can look clean but be absolutely deadly.’ Mistry is the strategy and marketing manager of Xylem Africa, the regional arm of the global water-technology provider. Like many people on this parched continent, he is concerned both about the supply and the quality of the drinking water. ‘Africa is not a water-rich continent,’ he says. ‘We have pockets of water in some parts, while other parts struggle with regard to large bodies of water. In areas that do have large bodies of water – like Uganda, where the big lakes are situated – distribution of clean water is the biggest problem.’

The challenge is that, generally speaking, rural Africa doesn’t have high-population hubs. ‘In Uganda, for example, you have Kampala, which is a hub, and you can take your pipeworks in there, similar to what you would do in South Africa’s major centres,’ says Mistry. ‘But when you go out into the rural areas, which are very sparsely populated, it’s not so easy to pipe water to people.’

That’s why many African communities use borehole systems to tap into the Earth’s aquifers and natural underground piping. And that’s why water quality is such a concern – and water purification such a priority.

‘When you distribute water from a central source, you can control the water quality at a central purification plant,’ says Mistry. ‘But when you have borehole systems, and contaminants like sewage and E. coli start to penetrate those underground water sources, you have a major water-quality problem.’

Boreholes – and solar boreholes especially – offer a practical solution to Africa’s water shortage problem but, as Mistry points out, they also create water-management challenges. ‘You’re draining these aquifers and underground water tables and not replenishing them,’ he says. ‘So you’re only controlling half the cycle. Everyone is focusing on how we can extract the water but nobody is controlling what we’re putting back in. Aquifers are nature’s water tanks, and we’re draining them, because our only thought is about serving water to those who need it now.’

That challenge becomes even greater in very dry countries such as Namibia, where many of the more than 100 000 boreholes drilled over the past century have been completely drained. Namibia’s ongoing drought (the 2018/19 rainy season received less than 50% of average seasonal rainfall) only compounds the crisis. Recently, the AfDB approved a US$121.7 million loan and a EUR3 million grant to bolster Namibia’s Water Sector Support programme, which aims to improve access to potable water.

One of the key elements of the project is sanitation marketing aimed at changing behaviours. As Gladys Wambui Gichuri, director of the AfDB’s Water Development and Sanitation Department, told the bank’s board, ‘it is critical to improve sanitation, including reducing the number of people practising open defecation’. 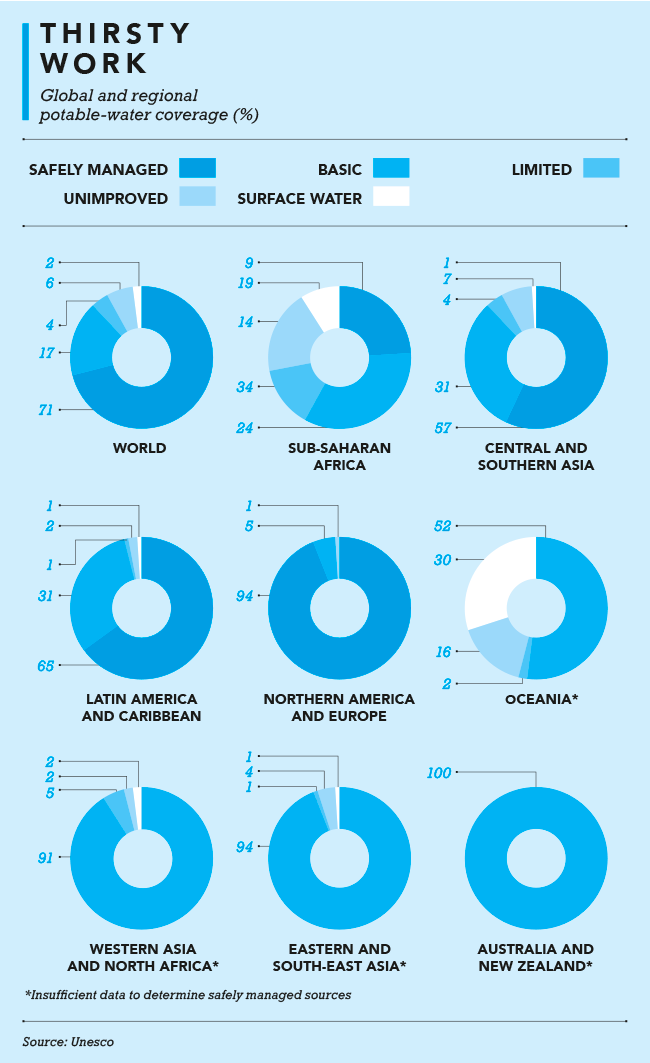 Across the border in South Africa, then-Minister of Water and Sanitation Gugile Nkwinti marked World Water Day 2019 by singling out pollution as the biggest threat to the country’s water quality. ‘A resolution to the thousands of informal settlements that stretch along South Africa’s rivers must be considered in order to deal with the problem of rampant water pollution in the country,’ he said.

Another problem in South Africa is the proliferation of knock-off water purifiers that entered the market during the country’s recent drought – to the danger of local residents and the frustration of local suppliers. ‘Every “Tom, Dick and Harry” claims to know how to treat water and what systems should be installed where,’ according to Tony Marchesini, MD of treatment company H2O International SA. ‘The truth is that there are a lot of fakes out there, and if you are investing in a filtration system, you really must insist on products that are tried and tested, even if it means asking the vendor to provide proof of origin and certification. Some over-the-counter knock-offs might contain lead, which is a very harmful substance. Most have not been tested and cannot deliver consistent quality over time.’

Not all water-purification systems are high-tech, though. For decades, remote settlements have been using sunlight as a disinfectant. According to the US Centres for Disease Control, more than 2 million people worldwide – including at least 250 000 in the Kibera slums of Nairobi – use solar disinfectant (Sodis) to clean their drinking water, in a simple process of filling a transparent bottle, placing it in direct sunlight for about six hours and letting the sun’s UV rays eliminate microbiological pathogens.

The problem with Sodis is that it has no effect on chemical contaminants, such as lead or toxic pollutants. That’s why the question of potable borehole water is so complex. ‘The chemistry of water changes as you go to through the different parts Africa,’ says Mistry. ‘In South Africa, the biggest problem tends to be the metal content, because of the pollution from mining that has penetrated our underground water tables. It’s a very expensive process to purify that water, because you’d need a heavy-metal-dissolving process like an ion-exchange resin or reverse-osmosis system.’

In other parts of Africa, where the water is not contaminated by heavy metals, the contamination tends to come from sewage. ‘There you have issues of high E. coli levels,’ says Mistry. ‘That’s an easier problem to solve, because there are many cheap methods of purification, including the old school of thought of chemical disinfection through bleach or chlorine.

‘The real problem in that case is getting the supply chains into those areas and educating people on healthy sanitation.’ While that old-school approach remains the most robust solution in remote areas, Mistry says that Xylem takes a more advanced, developed-world approach. ‘We’re like the guys in the shops who only buy organic vegetables,’ he jokes. ‘Our treatment machines are chemical-free and use UV ozonation.’

Ozonation is a more powerful oxidation solution than UV, as it treats microorganisms, oxidises organic matter, bleaches water that contains decomposing plant matter, and transforms the organic compounds that govern taste and odour. Mistry believes that the biggest challenge when it comes to water purification is one of education.

‘Water and electricity are both seen as utilities,’ he says. ‘But the thing about electricity is that either you’re getting it or not. Water is very different. Even if everybody has access to water, the quality is still in doubt. People can’t think, “I have running water, so what’s the problem?”. You have to consider the water quality.’

That sentiment is underlined in a recent World Bank report, which warns about the ripple effects of water pollution on global health, economies, education and agriculture. As that report states, ‘water quantity – too much in the case of floods, or too little in the case of droughts – grabs public attention and the media spotlight. Water quality – being predominantly invisible and hard to detect – goes largely unnoticed’.

More than 3 000 women leaders of farming co-operatives in Rwanda are... END_OF_DOCUMENT_TOKEN_TO_BE_REPLACED

A 13 km high-voltage power line being built in Zimbabwe is the... END_OF_DOCUMENT_TOKEN_TO_BE_REPLACED

Small and medium-sized businesses in Ghana that are struggling to adapt to... END_OF_DOCUMENT_TOKEN_TO_BE_REPLACED