Fifty-four countries, each with their own legal and business framework and policies. All of those countries generally promote foreign investment, but at the same time they want to maximise the local benefit from that investment. This usually involves various forms of taxes and other laws that require local shareholders and skills transfers.

Where does this diverse mix of business practices leave a multinational that invests in Africa from abroad or from another African country, and how does the investor negotiate the minefield of various legal regimes?

Business advisory firms generally agree that UK and US firms setting up operations in Africa are particularly wary of corruption due to strict anti-corruption legislation that governs their actions from their home countries. Other challenges depend mostly on the specific regimes of the countries that the foreign investor is operating in.

According to Pieter Steyn, chairman of LEX Africa, the main challenges multinationals operating in Africa face are with regard to regulatory uncertainty.

Established by Werksmans Attorneys, LEX Africa is the continent’s first and largest legal alliance. With members in 22 African countries, it has been actively advising and assisting clients in Africa since 1993.

‘It’s difficult to generalise about Africa, and overall the investment/business environment has improved over the last 20 years. However, regulatory uncertainty such as unclear or changing legal and regulatory frameworks for investment and business activities can cause confusion or resistance,’ says Steyn.

‘Also, governance issues like corruption, barriers to intra-African trade and infrastructural deficits such as roads, IT, air links between African countries remain issues for foreigners operating in Africa.’

He cites the example of Zimbabwe, which controversially requires 51% local shareholding. ‘Other African countries have less onerous requirements. Corruption is an important factor, especially for US and UK firms due to the Foreign Corrupt Practices Act and UK Bribery Act.’

‘Our LEX Africa colleagues are leading law firms in their respective countries and advise not just on legal issues but also on the political, business and cultural environment. A successful investment or business must take local issues into account and reliable specialist local expertise is vital.’

Steyn says South Africa has important mining, oil and gas sectors but these are bedevilled by regulatory uncertainty, including with regard to black economic empowerment, requirements and amendments to legislation that have been pending for several years.

‘Generally speaking, black economic empowerment requirements have been toughened in terms of recent changes to the legal framework, and this remains a key factor for local and foreign business to take into account in South Africa,’ says Steyn.

Kenya, Ethiopia, Rwanda and Tanzania are some of the fastest-growing economies on the continent while South Africa is seen as an important gateway into Africa.

Proposed restrictions on foreign investment in agricultural land; the termination of bilateral investment treaties with European countries; the criminalisation of cartels; and moves to make South Africa a centre for international arbitration are important recent developments in South Africa.

‘Language and, more generally, local cultural issues are very important. Several unsuccessful investments in certain African countries have failed or struggled as a result of a “one-size-fits-all” approach by the investor.

‘Tax remains a key factor, and it’s vital to get the initial tax structuring right from the beginning to take advantage of incentives and double taxation agreements, and understand both the tax law but also the practices of the local authorities. Transfer pricing has become a “hot potato” in many African countries,’ he says.

‘Notwithstanding the recent oil and commodities prices downturn, there are still opportunities in many African countries especially in infrastructure, services and consumer goods. The key to success is thorough upfront due diligence on the country’s legal, business, social, political and cultural environment and not taking a short-term attitude,’ he says.

Warren Foot is CEO of Fulcrum Chambers – a UK-based international legal advisory and consultancy that offers advice to multinationals on areas of potential risk, including anti-bribery and corruption, corporate governance, fraud, due diligence and regulatory and compliance issues.

According to Foot, a major challenge for multinationals operating in Africa is ensuring that they conduct business ethically and in accordance, at the very least, with international standards of probity rather than local customs, which may offend those standards.

‘Multinationals with a footprint in either the UK or the US can be prosecuted for acts of bribery and corruption even in connection with business conducted elsewhere, including Africa. Of course, there are cultural differences from country to country as to how business is conducted but “culture” is no defence to an allegation that a multinational failed to prevent bribery,‘ he says.

Foot also warns that infrastructural inefficiencies, particularly in the financial sector, can make doing business in some African countries frustrating. However, companies must avoid the temptation to ‘facilitate’ the smooth running of transactions if they are to minimise the risk of coming under prosecutorial scrutiny and serious reputational harm.

In short, multinationals must balance their role in economic development with a social responsibility to the countries in which they operate and the wider international community.

‘Our work includes advising how to avoid the regulatory pitfalls that organisations can come across when doing business in Africa,’ says Foot. ‘We help them investigate problems and then work with them to put in place solutions to overcome those problems in a way that minimises reputational risk and enhances business opportunities.’

According to a 2016 PwC analysis of business on the continent, boardroom agendas are changing to keep up with broader stakeholder needs and expectations. It found that organisations are having to take a more holistic view of their businesses while accounting for both financial and non-financial performance. 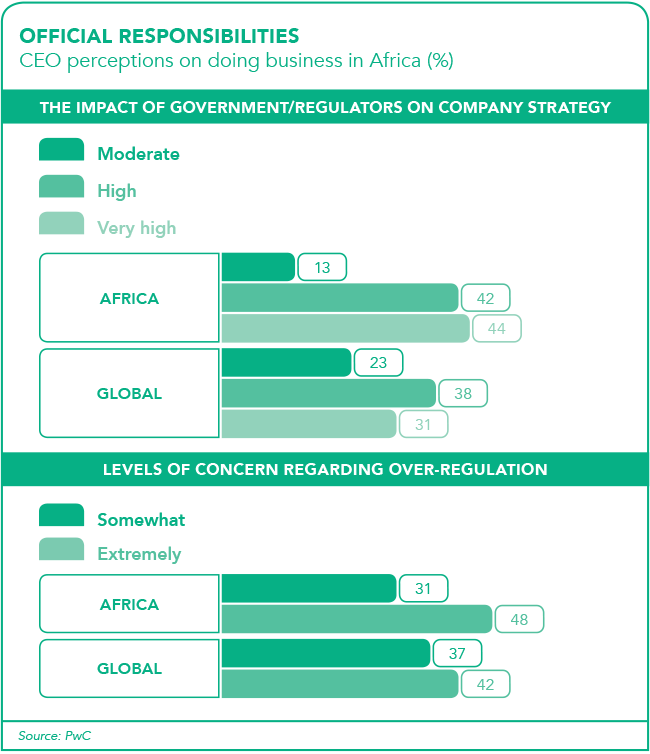 Further findings included that stakeholders are demanding more accountability and transparency; businesses need to carefully manage conflicting stakeholder interests; engagement with stakeholders needs to be effectively planned and managed; and successful companies tend to be collaborative and collective in terms of that engagement.

Regulation can impact on the competitive environment by increasing the cost of doing business but many businesses expanding in Africa face the challenge of meeting demand and achieving shareholders objectives, while also maintaining standards of high quality.

No less than 88% of African CEOs are making significant changes in response to stakeholder expectations about how they measure success and what they hold themselves accountable for, according to PwC. The global average for this is 86%.

Digital data technology, as well as barcode scanning, will be employed in... END_OF_DOCUMENT_TOKEN_TO_BE_REPLACED

Farmers in East Africa have a free, new mobile tool at their... END_OF_DOCUMENT_TOKEN_TO_BE_REPLACED