‘What’s holding back Africa’s airlines?’ challenged a CNN headline in 2013. It was a fair question. With the second-largest population of any continent, Africa accounted for just 3% of global air traffic.

The massive size of the continent, dubious infrastructure, lack of liberalisation, high taxes and fuel charges were, very accurately, just some of the reasons put forward for this sorry state of affairs. Also flagged, though, were insufficient flights and routes linking cities. African governments too have come under fire for protectionism and failing to expose their airlines to competition.

This has created enormous inefficiencies, leading, in many cases, to a somewhat ludicrous situation where a busy businessman is forced to take multiple flights to reach a relatively close destination.

It’s not as though there haven’t been efforts to remedy the situation. In 1999, the Yamoussoukro Decision aimed at deregulating air services, boosting competition and creating a single air transport market was signed, although it has yet to be implemented.

It’s not all doom and gloom though. There has been progress, and a very different picture is emerging to the one presented by CNN’s report just three years ago.

Mobility across the continent has become a priority, particularly for business people, and a borderless continent is a key preoccupation of the AU. In its framework document, Agenda 2063 (a 50-year action plan), the organisation sets out clear guidelines for the free movement of people, goods and services. Among these is the vision of a pan-African passport and the opening up of the continent. Part of this process entails the liberalisation of Africa’s skies. It certainly makes good business sense to do so, and the positive spin-offs for Africa’s economy are endless.

Thembela Dladla, country manager of South Africa for Rwanda’s national carrier – RwandAir – sketches it simply. ‘Ease of doing business requires efficiency of transportation,’ he says. ‘The more efficient the system is, the better it is to do business. This also allows for African economies to be more competitive in this globalised world.’

According to African Aerospace’s online news service, the continent’s airlines have experienced a 7.4% increase in traffic compared to a year ago. Capacity rose 5.9%, and load factor climbed 1.0 percentage point to 72.4%. With the increasing middle class and economic rejuvenation on the continent, there’s been a healthy increase in air travel demand.

Intra-Africa connectivity is paramount to the successful economic growth of the continent due to its vastness and tough terrain, says Dladla. And the best solution to logistics and transportation problems in the near future is air transportation, which, he maintains, ‘is the backbone of any economy and efficient, accessible and effective transportation is even more necessary for overall success. Air transport provides that solution’.

While the majority of regional carriers are playing their part in increased air traffic, a number of best practice examples stand out.

RwandAir is Africa’s fastest-growing airline and leading the charge, affirming its presence in West Africa by including Abidjan (Côte d’Ivoire), on its flight list this year. As part of a strategy to strengthen its continental footprint, the airline is also expanding to Southern Africa. Other new routes include Cotonou (Benin), Bamako (Mali), Lilongwe (Malawi), Khartoum (Sudan) and Harare (Zimbabwe). It also plans to expand operations to European and Asian markets.

RwandAir’s focus, according to Dladla, is on taking advantage of its geographical mid-hemisphere positioning by ‘connecting the east to the west, as well as the south to the north and vice versa through our hub in Kigali’.

For its part, South African Airways (SAA) hasn’t been resting on its laurels – the national carrier has substantially grown its Central African route network. The airline currently operates flights to five destinations in Central Africa. These include Douala (Cameroon), Kinshasa (DRC), Libreville (Gabon) and Brazzaville and Pointe-Noire (Republic of Congo). The airline also offers flights to Ndola (Zambia).

Aaron Munetsi, SAA acting general manager (commercial), said on the airline’s website that this move was largely aligned to growth in demand from mining executives, ‘especially those flying into South Africa from countries such as Australia’.

Ethiopian (Ethiopia’s national carrier) has also has been a standout in the African airline industry – lauded as the most lucrative carrier on the continent and for its world-leading innovations. The Centre for Aviation has reported that, on several fronts, Ethiopian has fast emerged as Africa’s leading airline, and that its most important contribution is its evolving role in setting up joint ventures throughout Africa. ‘Ethiopian’s willingness to develop aviation across the continent is noteworthy particularly given that other major African carriers have been unsuccessful over the years with similar pursuits,’ it states.

Kenya Airways is another mover and shaker, operating in more than 40 destinations in Africa both directly and through partnerships. 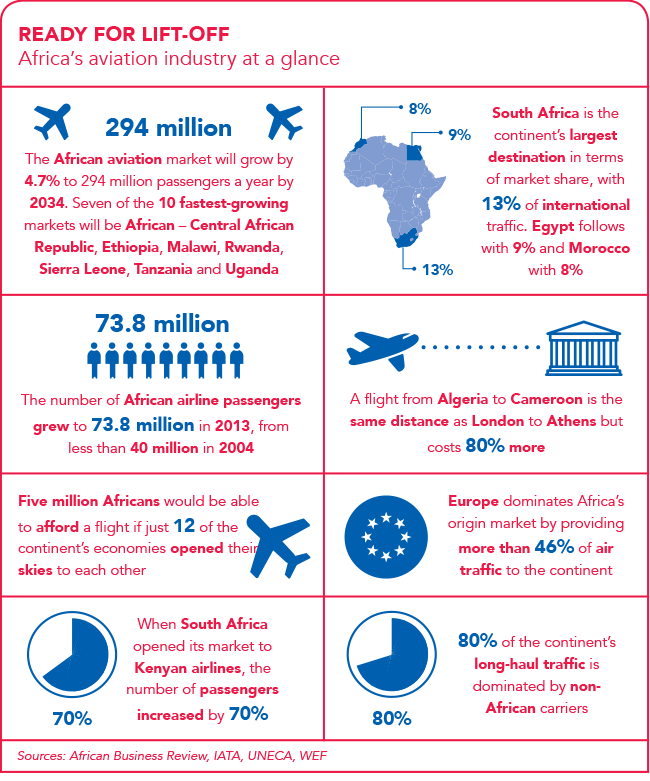 Numerous multinational companies have set up their bases in Africa, necessitating travel both for prospecting and running the business. ‘As countries in Africa open up and investors become aware of alternative investment opportunities in Africa, business travel continues to boom,’ says Jacquie Muhati, head of Africa marketing at Kenya Airways.

‘With regard to leisure travel, we’re increasingly seeing Africans travelling and exploring Africa and what it has to offer as an alternative holiday, shopping or education destination.’ More and more, low-cost airlines are also taking off across the region, serving routes that cater to the continent’s growing middle class. In addition, small operators are benefiting from the spin-off.

This will, of course, drive growth through increased connectivity, he adds.

Euan McNeil, general manager of South African-based FCM Travel Solutions (the corporate travel business of the Flight Centre Travel Group), says his group is seeing steady growth in business travel into Africa with between 10% and 15% growth per annum, which is driven by the business travel market.

One of the significant features of the expanding business of African aviation is the concept of regional hubs, the major examples of which include OR Tambo (long Africa’s main aviation hub); Nairobi, Kenya; and Addis Ababa, Ethiopia. The latter two – newer and more convenient hubs – have boomed thanks to growing passenger numbers.

The effectiveness of hubs now means that where airlines used to compete against each other, hubs are starting to compete. This has all manner of benefits and positive spin-offs, such as efficiencies and service excellence.

In March this year, it was reported that Rwanda and Ethiopia had struck an air deal, which pundits perceive as a new angle in the way countries and regions are seeking alliances with respect to their aviation ambitions.

In a nutshell, the partnership grants their carriers rights to operate unhindered in the other’s airspace. The airlines can effectively use their counterpart as a hub to carry passengers to a third country on the continent, with the possibility that this will be extended to other regions.

‘Hubs are mostly designed to increase efficiency of operations by reducing costs and also allowing for the operator to be able to reach as big of a market as possible through a central point,’ says Dladla.

As Africa positions itself in the global economy, governments are increasingly looking to aviation as one of the primary means of connecting their people and goods with the world. Strategic regional hubs will inevitably enable the continent to optimise its resources better and allow increased movement of both people and goods. According to Muhati, the end result will be ‘a better-connected continent opening up markets for intra-Africa trading while increasing opportunities for the world to trade with Africa’.

In McNeil’s opinion, regional hubs will play a strong role in the overall development and growth of the African economy. ‘A strong and easily accessible travel hub certainly helps promote access into countries and can play a key part in growing trade for the continent,’ he says. ‘There is, however, work to be done in terms of relaxing trade regulations, travel regulations and safety levels within certain countries to make Africa a truly attractive investment destination.’

Of course, the journey towards a connected continent is not with challenges. In a 2014 BDLive interview, Airports Council International secretary general Ali Tounsi said that Africa had more than 200 airports, yet the majority handled less than 1 million passengers a year.

Political and financial instability within certain countries still poses a major threat to expanding trade, says McNeil, but as economies become more established there is a growing appetite for companies to enter that market.

According to the International Air Transport Association, Africa was one of the only three regions to record positive year-to-date growth in 2015.

As South African Minister of Tourism Derek Hanekom stated in his opening address at Indaba 2016 (Africa’s biggest travel market) held in Durban, KwaZulu-Natal earlier this year: ‘If one quarter of African countries were to implement the open skies for Africa decision and facilitate greater air access between our countries, an additional 155 000 jobs and US$1.3 billion in GDP could be generated.’ Now that’s something worth flying for.

Ghana has opened its first farmer-owned cocoa fermentation centre. The facility, at... END_OF_DOCUMENT_TOKEN_TO_BE_REPLACED

An initiative supporting efforts to ensure the continuation of education amid the coronavirus... END_OF_DOCUMENT_TOKEN_TO_BE_REPLACED

The Namibian government is rolling out a NAD500 million COVID-19 loan scheme... END_OF_DOCUMENT_TOKEN_TO_BE_REPLACED