Forty-seven years from now, the 18-year-old school-leavers of today will turn 65, the compulsory retirement age in both South Africa and Nigeria. That’s also the year the AU has set for the realisation of its vision of a ‘transformed continent’.

The organisation’s stated aspiration is for a ‘prosperous continent’, where ‘well educated and skilled citizens underpinned by science, technology and innovation for a knowledge society is the norm and no child misses school due to poverty or any form of discrimination’.

For school-leavers in sub-Saharan Africa, 2063 must seem a lifetime away – especially in a region where enrolment in tertiary education is currently in single digits. According to a 2010 report by the UN Educational, Scientific and Cultural Organisation (UNESCO), only 6% of the tertiary education age cohort in sub-Saharan Africa was enrolled in tertiary institutions in 2008. That was far below the global average of 26%, merely a fraction of the rate in North America and Western Europe (70%), and about the same rate as recorded in Latin America and the Caribbean in 1970. When it comes to studying further, sub-Saharan Africa is at least four decades behind its contemporaries in the developing world.

‘We are not going to wait until 2063,’ Egypt’s Minister of Communications and Information Technology, Yasser ElKady, declared at the 2016 eLearning Africa conference, held in Cairo this past May. That sense of impatience was echoed throughout the conference, as delegates called for young Africans to feel the benefits of tech-driven education within the next 10 years.

Ismail Serageldin, director of the Bibliotheca Alexandrina, added: ‘It’s the dawn of a new age. Let’s embrace it. There is so much we can do for a new generation and for the whole world. We cannot let the gap between us and the advanced nations continue to grow.

‘We must translate rhetoric into action. Rhetoric, declarations, plans and targets are not equal to action.’

In Africa, that action is increasingly coming in the form of e-learning. The continent’s e-learning market doubled between 2011 and 2016, reaching US$513 million, according to a new report by market researchers Ambient Insights. The report positioned South Africa as Africa’s largest e-learning market, followed by Angola, Nigeria and Tunisia. The e-learning markets in Kenya, Senegal, Zimbabwe and Zambia all posted 25% annual growth in that same period.

You’ll hear the same thing at every ICT conference and every education gathering: Africa is a hotbed for e-learning, with enormous growth potential.

Yet the reality is that few schools on the continent currently have the ability to roll out effective e-learning programmes. In South Africa’s Gauteng province, Education MEC Panyaza Lesufi has led a paperless education system that is expected to cost approximately ZAR17 billion. However, Lesufi admitted that the programme has stumbled due to theft issues regarding equipment.

And while internet penetration is increasingly widespread in Africa (especially in urban areas), the continent still suffers from a chronic power shortage. That’s a problem when it comes to e-anything – and especially e-learning.

In the eLearning Africa Survey 2015, some 60% of respondents said they do not have sufficient access to ICT, 50% of those pointed to poor connectivity, lack of access to bandwidth and unreliable electricity. Unfortunately, there is no single solution because there’s no single problem. Gather 10 education professionals in a room together, ask them to name the biggest obstacle to African e-learning and you’ll receive 10 different answers.

Clearly, Africa cannot wait until 2063. As the editors of the eLearning Africa Report 2015 wrote: ‘Sometimes, gradual change just isn’t enough. When the pace of technological change is moving at ever giddier and more alarming speeds, gradual change in society begins to look not merely anachronistic but dangerous. Technology is driving change in Africa and fuelling the economic growth of African economies. There is now an urgent need for radical change.’

That change is coming in the form of practical classroom technologies and a boom in e-learning investment. ‘Africa is one the world’s most dynamic education markets,’ Trixie LohMirmand, senior vice-president of exhibitions and events management at the Dubai World Trade Centre, said at the recent GITEX Technology Week.

Meanwhile, at the recent Innovation Africa summit in Nairobi, Microsoft Middle East and Africa education director Mark Chaban said: ‘We are seeing a shift in the way we think about our education systems, based on the intuitive nature with which the youth interacts with technology and the dramatic evolution we’re seeing in the 21st century workplace.

‘In addition, the burgeoning youth population across Africa means we need to find a way to more effectively reach a greater number of students.

‘Simultaneously, we need to allow them to learn in their own unique way, anytime, any place and at their own pace. Cloud computing, provision of devices to allow for immersive, mobile learning environments and teacher training are all contributing to this evolution and Innovation Africa is the perfect platform to discuss these solutions.’

Absa, which is part of the Barclays Africa Group, began the 2016 school year with the launch of its ReadytoWork programme in South Africa. The programme – which Barclays Africa already runs in Zambia, Botswana, Seychelles, Kenya, Zimbabwe and Mauritius – is a free online training curriculum that is designed to empower young people with the skills needed to enhance their employability and entrepreneurial prospects.

‘A key priority of our citizenship strategy is to help young people gain access to the skills and opportunities they need to unlock their potential,’ Sazini Mojapelo, Barclays Africa head of citizenship, said at the launch.

‘We have identified education and skills development as a space in which it can make a sustainable contribution through initiatives such as ReadytoWork. Our launch here comes at an opportune time, helping young people across the country who have completed their exams to prepare for the next phase in their lives – the world of work.’

In September, eLearnAfrica launched its new online marketplace for education, partnering with global e-learning giants edX and FutureLearn to offer a huge variety of courses to its primarily African audience.

Speaking at the eLearnAfrica partnership launch, Nigel Smith, head of content at FutureLearn, said: ‘With 8% of our current learners based in Africa, there is clearly an existing appetite for free, high-quality education from reliable and trustworthy sources but also huge potential for growth.

‘We offer a vast array of professional development courses that can increase employability or help learners to start their own businesses, while our general interest courses provide something for everyone with lifelong learning ambitions. And of course, through our social learning platform, all our courses offer an element of experience of studying abroad with different cultures without the expense of leaving the country.

‘We have no doubt that eLearnAfrica will be both popular and successful and we look forward to working with their team to reach more learners on the African continent.’

Meanwhile, in June, Naspers invested US$60 million in online-learning provider Udemy, a US start-up that now offers more than 40 000 courses in 80 different languages. 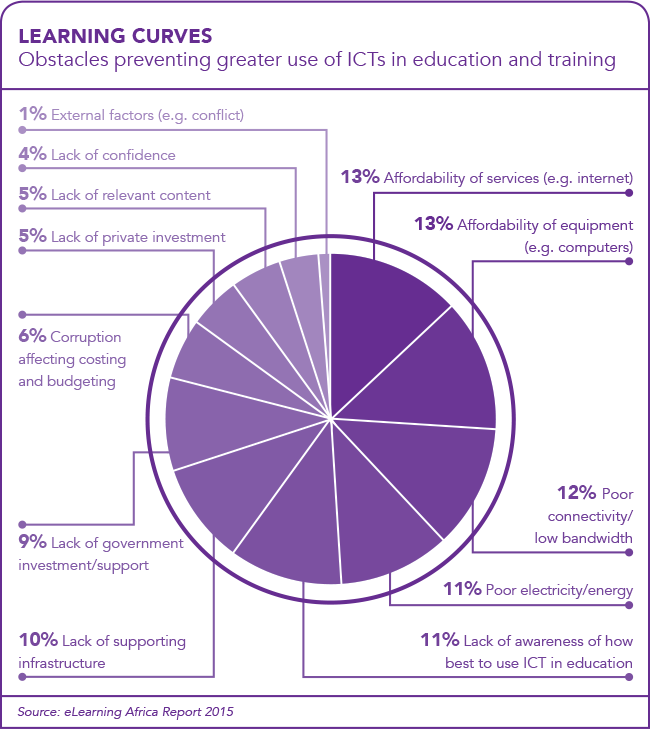 That came less than a month after Naspers’ newly opened San Francisco office had led a US$15 million injection in education-technology company Brainly.

‘Naspers is consistently looking to invest in markets where technology can make a significant impact. Udemy has built a technology platform that will transform education on a global scale and we are eager to help them with further expansion,’ says Larry Illg, CEO of Naspers Ventures.

‘There is a widespread awareness among educators, politicians and businessmen that we really have to move quickly now,’ Charles Senkondo, executive director of Tanzania’s Global Learning Agency, said at the eLearning Africa conference.

‘We are all aware that Africa is a young continent and that soon the majority of our population will be under the age of 24. We can’t afford to leave the future of 200 million young Africans to chance. Unless we invest heavily in education and training, and ensure that our young people are fully equipped to compete in the digital age, we will store up some very serious social problems for ourselves and our neighbours.’

Summing up the beliefs of many at the conference – and in the broader e-learning industry – Senkondo added: ‘We’re all focusing on moving beyond ideas to implementation.

‘There is a real willingness to collaborate and to share knowledge and experience, so that the whole of Africa can move ahead.’

Ghana has opened its first farmer-owned cocoa fermentation centre. The facility, at... END_OF_DOCUMENT_TOKEN_TO_BE_REPLACED

An initiative supporting efforts to ensure the continuation of education amid the coronavirus... END_OF_DOCUMENT_TOKEN_TO_BE_REPLACED

The Namibian government is rolling out a NAD500 million COVID-19 loan scheme... END_OF_DOCUMENT_TOKEN_TO_BE_REPLACED