Large retailers such as US supermarket giant Walmart are targeting consumer markets in African countries, where on average about 80% of the population are without a bank account. These retailers are teaming up with microfinance institutions (MFIs) to create new financial products such as small loan facilities for township-type businesses, insurance cover and financial products that have traditionally not been accessible to millions in Africa – especially in rural areas.

A decade ago, the microfinance market served 33 million borrowers and 48 million consumers. However, entrepreneurs operating informal survivalist enterprises still largely remain out of the reach of formal financial markets and banks due to the inability of these institutions to service deep rural areas where most of Africa’s poor eke out an existence, often in subsistence farming.

Microfinance has traditionally been linked to poverty alleviation. Since the 1970s, it has been dominated by large not-for-profit MFIs working with NGOs, donors and development institutions, such as the UN, in an effort to uplift the poor. Any loan usually went hand in hand with some form of community development project run by an NGO.

Across Africa, the poor can still obtain unsecured loans from a plethora of unregistered lenders who charge exorbitant interest rates. However, traditional microfinance methods have started to evolve since not-for-profit MFIs, such as Kenya’s Faulu Microfinance Bank, have come to comprehend the value of profitability.

Realising that running at a profit would help achieve greater sustainability and strength has moved a few notches in the priority stakes. This prompted several MFIs to partner with large consumer retailers in the mobile telephone and technology space – and some cases also banks – to gain access to Africa’s vast market crying out for viable financial products and services.

For instance, in 2014, South African financial services group Old Mutual entered the East African mass market by acquiring a majority stake in Faulu. The deal places Old Mutual at the coalface of microfinance delivery to Africa’s poor and opened the door to more than 400 000 existing Faulu clients.

Old Mutual has embarked on a long-term push into Africa’s vast untapped microfinance landscape. In 2014, then Old Mutual CEO Julian Roberts said the company was looking for more ‘suitable targets’ to acquire in other parts of Africa. 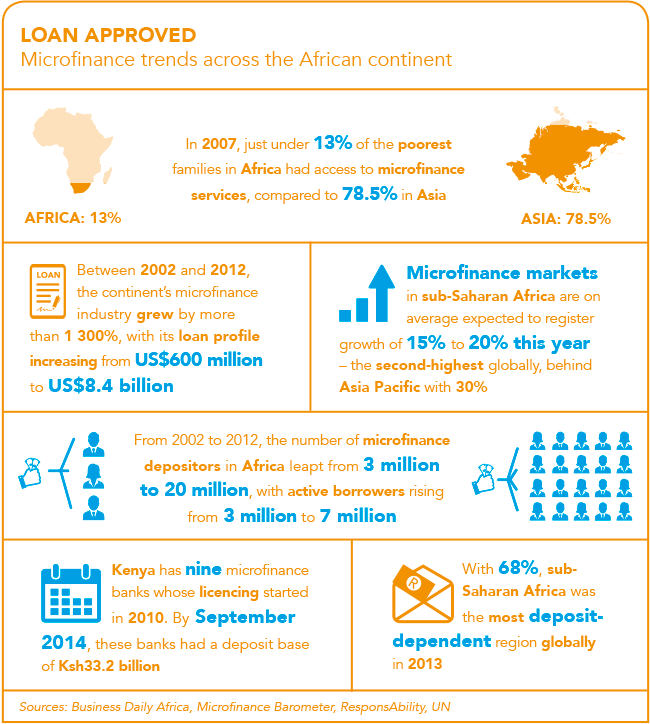 The company has more than 16 million customers in the Americas, Africa, Asia and Europe, while Faulu’s distribution network spreads across the whole of Kenya with in excess of 100 branches. ’We look forward to seeing the results of this mutually beneficial relationship,’ Roberts said at the time of the deal.

In Ghana, Stanbic Bank, the Agricultural Development Bank (ADB) and Universal Merchant Bank all adopted strategies to cater for small businesses. This followed a review by the country’s government of its banking industry. Stanbic introduced the new SME Quick Loan to overcome the usual challenges that SMEs face when dealing with commercial banks. Similar changes were carried out by ADB to accommodate small-scale farmers.

Swiss microfinance investor ResponsAbility says in East Africa, branchless banking and mobile money allow for much faster inclusion of rural populations into financial systems than traditional methods such as donor funding. ‘In many African countries, the private sector has only just awakened from inertia infused with donor dependency, government tutelage and fatalism. There is strong evidence that business models pioneered in East Africa are spreading across the continent. Driven by a need to leapfrog outdated technologies and helped by responsive central banks, East Africa has become a hotbed of innovation in financial services.

‘Microentrepreneurs are traditionally starved of finance as they cannot provide the collateral required by banks. This is unfortunate, as microentrepreneurs who have access to credit typically provide returns on investment of several dozen to several hundred percent. The absence of a working financial sector severely restricts the capacity of small businesses to grow and the ability of households to save.’

East Africa is one of the world regions where MFIs have proven that they have the ability to handle deposits and grow into fully fledged financial providers. Regulators in that part of Africa have also pursued the logic of branchless banking by allowing a broad range of services to be offered via mobile phone. There are 1.7 billion people in the world who do not have a bank account but do have a mobile phone. ‘Seventy-three percent of Kenyan adults use mobile money and 23% use it at least once a day,’ says ResponsAbility.

In sub-Saharan Africa, small and medium enterprises make up the bulk of firms and are the primary source of employment in low-income economies after subsistence farming, according to Rand Merchant Bank (RMB).

Across Africa, the poor can still obtain unsecured loans from a plethora of unregistered lenders who charge exorbitant interest rates

The UN Economic Commission for Africa says SMEs account for 70% of jobs in Nigeria and 55% in South Africa, but access to finance limits these small businesses’ contribution to GDP. Their capital comes from retained earnings, informal savings or loan associations.

Microfinance institutions are particularly helpful in this regard. Although they have low penetration rates in Africa, they are growing in importance as a source of start-up capital for many small businesses. The burden of traditionally high interest rates have also lessened due to increasing competition between microfinancing institutions that issue guarantees for loans, and commercial banks that require collateral. For instance, the African Development Bank (AfDB) has partnered with the Danish and Spanish governments and initiated the African Guarantee Fund to back up loans to small businesses, RMB states on its website.

The guarantee fund is a permanent regional conduit that channels guarantees and technical assistance to financial institutions to increase growth in the continent’s SME sector. But much of Africa’s poor are subsistence farmers who depend on small-scale crop growing or livestock production in deep rural areas – the most difficult parts of the continent, geographically, for financial institutions to provide services to.

According to a 2014 AfDB strategy document titled Financial Inclusion in Africa, government policies and measures can make a big difference to grow small farmers and informal businesses, thereby helping to lift the growth rates in many countries on the continent and alleviate almost entrenched poverty levels.

The strategy document proposes measures for rural farmer development. The first three measures are to protect farmers’ land tenure rights, as this gives them negotiating power within the value chain; develop pilot buyer and food company lead value chains (for example, Walmart’s efforts to uplift small farming producers in South Africa); and develop transparent pricing platforms to provide smallholders with a full understanding of the appropriate pricing of their products throughout the value chains.

The remaining measures are the formulation of policies to ensure that food companies that move closer into deep African markets help improve the capacity of smallholders through knowledge-transfer, legislation and public-private partnerships; and the strengthening of co-operatives to improve smallholders’ negotiating power with buyers and food companies.

Commercial banks, MFIs and non-bank financial institutions should strive to tailor products to meet the needs of Africa’s untapped rural market, and governments should ensure they have frameworks in place that enable the private sector to fully engage rural populations in a mutually beneficial manner.

The first transshipment cargo has docked at the new deep-water Port of... END_OF_DOCUMENT_TOKEN_TO_BE_REPLACED

A US$50 million trade-finance facility has been created to help support Africa’s... END_OF_DOCUMENT_TOKEN_TO_BE_REPLACED