Not one, not two, not even three but four new stock exchanges have been licensed by the Financial Services Board in South Africa, with possibly a fifth ‘township exchange’ to follow in the near future.

After close to six decades, the historic monopoly of the venerable Johannesburg Stock Exchange (JSE) has now ended. The continent’s largest bourse has outlived numerous competitors during its 130-year existence, with its last direct competitor, the Union Exchange, ceasing trading in 1958.

They are the tech disruptors of traditional high finance, which could turn the market upside down and make it more accessible to a larger number of Africans. By lowering the transaction costs and other barriers to entry, the new bourses might replicate the turmoil kulula.com and flymango.com have caused in the airline industry, Uber in the taxi sector, AirBnB in the hospitality space and takealot.com among brick-and-mortar retailers.

Johannesburg-based ZAR X is the first of these new-generation stock exchanges in Africa, having been awarded its licence in August 2016. ‘By basing its operating model on the latest technology, ZAR X has an agility and flexibility older stock exchanges do not necessarily enjoy. This enables it to remain relevant in a financial services sector that is being profoundly disrupted by digital, mobile and social technologies,’ says ZAR X CEO Etienne Nel in a Finweek report.

He adds that the idea for the bourse had been in the pipeline for a while. ‘It came over a 10-year period of the growing realisation that the capital market space really needs more competition, and that there was a massive need for an alternative trading platform and capital-raising mechanism to the JSE.’

According to ZAR X, you don’t have to be rich to invest in shares. ‘We’ve effectively created an investment account for the man in the street. Think of it as a Gmail account for investments,’ Nel said at last year’s Finance Indaba Africa. ‘Every person in this room can go to a ZAR X-approved broker and set up an account for free. You can start your investment journey with as little as ZAR1 000. This means a lot of people now have access to an investment account that they did not have before.’ 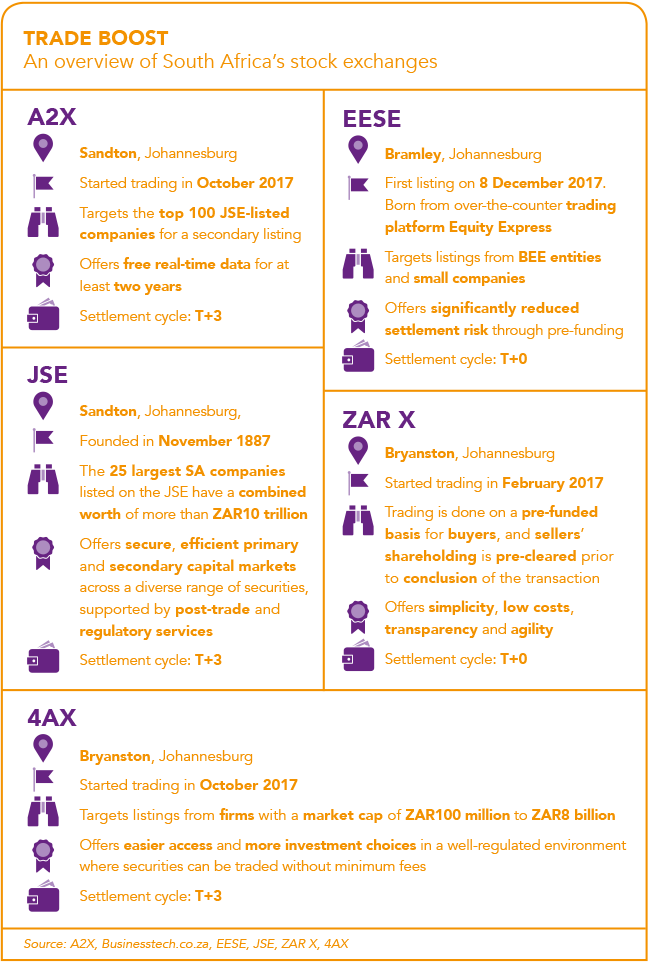 Jannie Rossouw, head of the school of economic and business sciences at the University of the Witwatersrand, welcomes the emergence of ‘rival’ bourses because, he says, competition often brings new thinking that benefits customers. ‘At the moment, the new stock exchanges serve niche markets, but nothing prevents one or more of them from growing to the point where they become serious competition for the JSE, in the same way as Capitec Bank, which grew to the point where it became serious competition for large established banks,’ he says.

‘We shall, however, only be able to establish clear trends in this regard once an increasing number of companies obtain multiple listings. In other words, listings on more than one of these stock exchanges.’

A2X, which started trading last October as the third new bourse in South Africa, specifically targets secondary (or dual) listings of the top 100 JSE companies. Within a few weeks of being launched, it had already attracted listings collectively valued at ZAR40 billion in market cap.

Furthermore, the end-to-end costs of transacting are ‘in excess of 40% lower than current trading costs’, says A2X. This reduced cost increases market efficiency and ultimately benefits the clients, be it institutional or retail investors. A2X uses the same settlement cycle as the JSE, which was reduced from six days to four a few years ago. In financial speak, this is called ‘trade plus three days’, or in short T+3. But others now do it lightning fast such as ZAR X’s pre-funded model, which settles trade in real-time (T+0).

A2X CEO Kevin Brady says his business model is dependent on throughput – the more trades processed via the exchange, the greater the revenues for the company. ‘A2X’s model aligns with the objective of growing the overall market in South Africa – lowering costs, improving liquidity and being both innovative and responsive to market needs.’

The other newcomer, 4AX – which went operational just before A2X – targets listings with a market cap of between ZAR100 million and ZAR8 billion. It strives to be ‘less regulatory onerous’ than the JSE, and more easily accessible to the man or woman in the street, says CEO Fay Mukaddam in an interview with Business Report. ‘We own our own technology. Because of the technology, we can keep our staff numbers and fees down. We want to bring Africa’s innovators to the world.’

Like ZAR X and the latest addition, EESE, 4AX allows issuers to limit the number of shares and specify who may own them. For example, agricultural business NWK Holdings – a shareholder in 4AX and also the first company to be listed on the exchange – has restricted ownership of its shares to farmers.

This restricted market is also aimed at BEE structures in which black South Africans only or, in some cases, black South African women only are allowed to buy and sell shares. However, it’s still being debated whether this is in line with the country’s constitution.

EESE, which evolved from an over-the-counter trading platform, addresses mainly BEE schemes and smaller companies. At the time of writing, the bourse was focusing on its first listing, Ukhamba – an investment holding company originally formed by the Imperial Group to benefit historically disadvantaged employees.

‘The approval was preceded by 18 months of hard work by what is now an established team. We have a pipeline of other listings that the team is working on, but we can’t disclose names at this point as the discussions are at a very early stage.’

Meanwhile, another prospective bourse, the South African Financial Exchange (Safe), is preparing for its FSB licence. The black-controlled ‘township exchange’ is aimed at the lower end of the market and plans to collaborate with government to provide funding to SMEs and start-ups.

‘It’s a step in the right direction when regular people and small businesses get the oppor-tunity to raise capital or invest to create personal wealth,’ says Aunnie Patton Power, innovative finance lead at the Bertha Centre for Social Innovation, located at the University of Cape Town’s Graduate School of Business. ‘Africa’s financial markets currently only work for a very small group of people.

‘The need for financial inclusion and SME finance is extensive. We’re seeing, for instance, that more stokvels are investing in stock exchanges. But merely having access to a stock exchange is not enough. This needs to be accompanied by safeguards and financial education.’

All of this, of course, is a challenge to the grand old lady herself, the JSE. But she has kept up with the times by running financial literacy programmes for constituents and enterprise development for black brokers, and is now responding to the increased competition.

Zeona Jacobs, director of marketing and corporate affairs at the JSE, says efforts are under way to improve its service ‘by investing in faster and more secure technology – as we are doing in replacing our derivatives trading and clearing technology – and by introducing new instruments and products for investors and members, thereby ensuring that regulation is both appropriate and enabling and brings down costs for our clients’.

All the competition means that investors have a choice when it comes to trading shares. And judging by the emergence of new stock exchanges, this is just the beginning.

The first transshipment cargo has docked at the new deep-water Port of... END_OF_DOCUMENT_TOKEN_TO_BE_REPLACED

A US$50 million trade-finance facility has been created to help support Africa’s... END_OF_DOCUMENT_TOKEN_TO_BE_REPLACED