The World Bank’s 2019 Doing Business Index singled out Djibouti, Togo, Kenya, Côte d’Ivoire and Rwanda as African economies that showed the most improvement from the previous year. Out of 190 global economies featured, Kenya scored 70.31 and sits at 61 on the list in terms of ease of doing business, above countries such as Botswana (86) and Namibia (107) – the sub-Saharan average score is 51.61. Mauritius regained a spot in the world’s top ranked economies, in 20th place.

‘Economies in sub-Saharan Africa set a new record for a third consecutive year, carrying out 107 reforms in the past year to improve the ease of doing business for domestic small and medium enterprises,’ according to the World Bank. ‘The latest reforms were a significant increase over the 83 reforms that were implemented in the region the previous year. This year also saw the highest number of economies carrying out reforms, with 40 of the region’s 48 economies implementing at least one reform, compared to the previous high of 37 economies two years ago.’ In simple terms, doing business in Africa has become easier for local companies, making them more attractive to investors.

Adam Bennot, senior associate in unlisted investment services at RisCura, says the continent’s steady rise continues to attract a growing number of investors who believe that African markets offer an exciting growth and investment opportunity. Some of the key drivers include improvement in the business environment, fiscal reform and sound economic policies, technological advancement, regional integration and improved co-operation between the public and private sector.

Major deals concluded in South Africa include Old Mutual Private Equity’s acquisition of a majority interest in Footgear, a South African retailer of branded footwear; African Rainbow Capital and Ethos Private Equity’s investment in digital bank TymeBank; and the sale of MTN’s interest in Amadeus and its associated holding in Travelstart to HarbourVest.

In June 2018, Mercedes-Benz announced that it would be investing EUR600 million into expanding its East London plant in the Eastern Cape, South Africa. Markus Schäfer, member of the divisional board, Mercedes-Benz cars production and supply chain, said: ‘With [this] investment […] we are significantly expanding our plant in East London and equipping it for the future. The decision to have the new generation of the C-Class built in East London re-affirms the plant and Mercedes-Benz South Africa. The investment is also a sign of our commitment to South Africa and efforts to revive economic growth as well as the socio-economic development of the East London region.’

South African President Cyril Ramaphosa said of the announcement that a central priority for the South African government this year has been to encourage significant new investment into economy, which is necessary to realise economic growth, employment and reduce inequality. ‘The announcement by Mercedes-Benz to inject ZAR10 billion into the South African economy signals the positive momentum we are making to realise the ambitious target of raising ZAR1.2 trillion in new investment,’ he said. ‘This investment by Mercedes-Benz endorses South Africa as a favourable destination for investment and demonstrates our determination to work with all social partners to seize the opportunities that are opening up for greater investment and faster growth.’

Last year marked the 60th anniversary of Mercedes-Benz passenger vehicle production at the East London plant, and throughout the years the plant has evolved as a significant contributor to South Africa’s trade balance and an economic multiplier for East London. The plant produces the Mercedes-Benz C-Class sedan for export to right-hand and left-hand drive markets, with production volumes reaching 110 000 vehicles in 2017.

Further abroad on the continent, in a dual-currency deal for Tanzania that was fully underwritten by Nedbank CIB, Geita Gold Mining Ltd (GGML) borrowed US$115 million with the participation of local banks to finance the expansion of underground operations. GGML is one of the largest corporates in Tanzania, and one of the biggest mines in the AngloGold Ashanti portfolio. ‘We are more steadfast in our commitment to unlocking value across the continent and the collaboration with local stakeholders will benefit the local community and economy in the long term,’ says Witness Kamera, principal of mining and resources at Nedbank CIB. 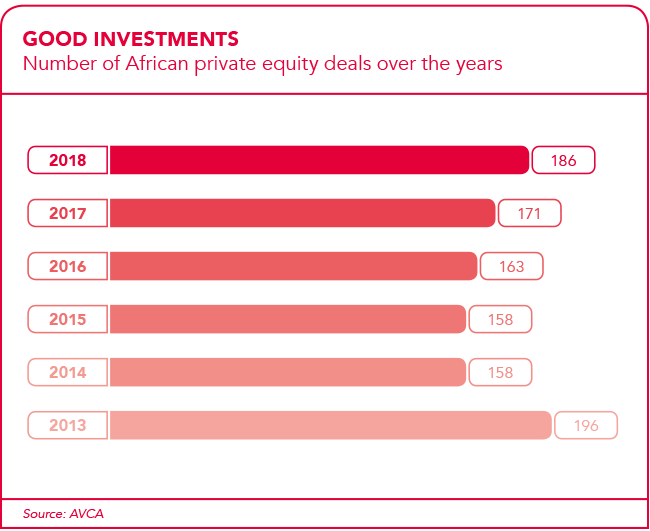 The continent is also seeing a rise in private equity (PE) investment. The total value of PE fundraising in Africa increased to US$2.7 billion in 2018, up from US$2.4 billion the previous year. Deals concluded in 2018 totalled 186. These numbers from the African Venture Capital and Private Equity Association (AVCA) demonstrate a growing appetite for investment on the continent. And while it continues to be a tough environment for African PE funds to raise capital, due to negative investor perception on certain fronts, investment opportunities in South Africa and the rest of Africa are myriad, says Tanya van Lill, CEO of the Southern African Venture Capital and Private Equity Association (SAVCA). ‘Although the South African venture capital industry is still nascent, we are seeing an increase in investments in early-stage businesses that have the potential to scale in both local and international markets,’ she says.

The PE market has also seen an increase in investment in mid-market companies as well as more co-investments on the continent. ‘More South African-based funds are looking at investment opportunities beyond South Africa, while also encouraging portfolio companies to seek out opportunities across the continent.’ In 2017, the sectors that showed promise in terms of PE included retail, services, real estate, infrastructure and financial services. In the venture capital space, the 2018 SAVCA Venture Capital Survey lists the top sectors (based on early-stage investments and according to deal values) as manufacturing, food and beverage, medical devices and equipment, consumer products/services and energy.

‘It’s important to note that the key sectors differ from region to region on the continent depending on the investment mandates of the funds investing in those regions,’ says Van Lill. ‘With Africa’s rapidly growing food market estimated to be worth more than US$1 trillion annually by 2030, some fund managers are investing in the food and agri-tech space to capitalise on the potential future growth of this industry,’ she adds.

There is a lot of capital chasing fewer deals, says Van Lill. ‘Companies seeking private equity investment therefore have the opportunity to engage with multiple fund managers to find the right fund to partner with, based on the value the fund will bring to the table, over and above the capital.’ However, there is room for growth in South African and African PE markets, particularly given the potential for growth across various sectors.

A key concern for investors in Africa is the weak exit environment, says Bennot. ‘A perception often shared by investors is that the shallow nature of African capital markets makes exiting investments difficult to execute.’ But Africa’s exit environment has remained resilient and more active than investors realise. According to a recent PE exit study by AVCA and EY, there have been 403 exits over the past 10 years and, with 50 exits, 2016 was a record year. ‘This indicates an increasing momentum for PE exits. The number of exits in 2018 dropped slightly to 49, primarily due to fewer exits announced in South Africa off the back of increased political and economic uncertainty,’ says Bennot.

As the African PE landscape matures, the opportunities for exits will improve as investors continue to diversify their PE portfolios, notes Bennot. ‘Exits via secondary buyout markets and to strategic buyers is likely to remain the primary exit strategy for African GPs [general partners]. Due to the challenges facing PE-backed IPO exits on Africa’s stock exchanges, we expect this strategy to remain subdued over the medium term.

However, as African capital markets broaden and deepen, this strategy will increasingly represent a larger proportion of exits on the continent over the long term,’ he says. ‘Trusted local partners with market knowledge further increase investment opportunities on the continent,’ says Van Lill. ‘There has been an increase in impact investment funds setting their sights on the continent, due to the numerous opportunities to do well financially, but also to do good at the same time. It’s important for South Africa as well as the rest of the African continent to sell the investment narrative to the rest of the world.’

Côte d’Ivoire has become the second country to take delivery of COVID-19... END_OF_DOCUMENT_TOKEN_TO_BE_REPLACED

Nigeria is set to commence work this quarter on a complete overhaul... END_OF_DOCUMENT_TOKEN_TO_BE_REPLACED

Burundi and Rwanda are going ahead with plans to build a multi-purpose... END_OF_DOCUMENT_TOKEN_TO_BE_REPLACED