The skies above Agbogbloshie are thick with smoke. The neighbouring lagoon is choked by bacteria; the soil riddled with lead and mercury. Situated in the slums of central Accra, Agbogbloshie is one of Africa’s most notorious landfills – a living, breathing example of the continent’s waste management crisis.

Many in the West view Agbogbloshie as a vision of the coming pollution apocalypse: it’s been described as the biggest e-waste dump in the world, where people live amid the poison, and where the mounds of solid waste bring no hope for the future. It’s not (there are far bigger e-waste dump sites in China) and they don’t (locals live across the polluted river in Old Fadama); and while Agbogbloshie is certainly a hideous symptom of Ghana’s – and the continent’s – massive, massive solid waste problem, it also holds a faint glimmer of hope for Africa’s new circular economy.

An industry of about 5 000 scrap workers and waste pickers go to Agbogbloshie every day, risking their health to collect and recycle (often on-site) valuable metals such as copper and aluminium. Ghana collects about 95% of its e-waste, and the informal waste-picking economy provides employment and income for many of the country’s unskilled youth.

In South Africa’s Gauteng province, Kgosientso Ramokgopa, member of the executive council in charge of Economic Development, Agriculture and Environment, marked June’s World Environment Day by joining a clean-up campaign in the Tshwane municipality. ‘This World Environment Day is very significant because it brings to our attention the need to live in clean environments,’ he told reporters. ‘That is why we have initiated this intervention. It is not a panacea to resolving our problems but it’s going to make sure that we are able to address the attitudes of our people in relation to environment, space and litter.’ Ramokgopa added that communities had an opportunity to generate revenue from waste, with new technologies allowing solid waste to be recycled and sold back to big companies. ‘We need to ensure that we are able to convert waste into revenue income,’ he said. ‘My view is simple: waste is the new gold.’

Traditionally, formal actors such as municipalities or private waste contractors have provided waste collection services. Yet in many African cities – from Accra to Tshwane – the informal sector plays an equally important role. A new UN report cites Nairobi as an example, where ‘the main actors in waste collection are the city council (500 tons per day), private waste contractors (500 tons per day) and informal waste recyclers and pickers (350 tons per day). In addition, CBOs [community-based organisations] and self-help groups play an important role in primary waste collection in the very densely populated areas of Nairobi’. 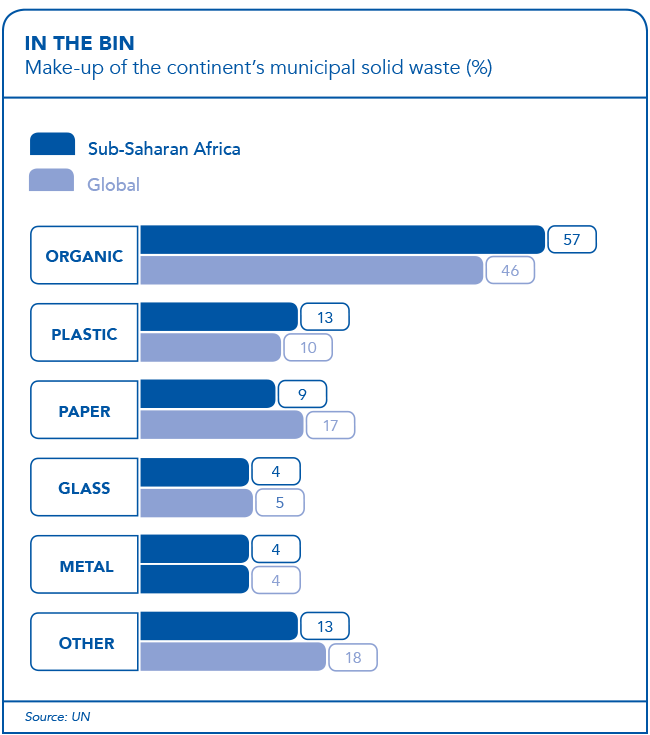 That report, the Africa Waste Management Outlook, indicates that good waste collection and transport services are often found only in Africa’s city centres, while services in suburbs are usually poor. ‘Uncontrolled and controlled dumping are the most common waste disposal practices in Africa,’ it notes. ‘The waste in open dumps is left untreated, uncovered and unsegregated, with little to no groundwater protection or leachate recovery. However, the number of cities shifting from uncontrolled disposal to sanitary landfills is increasing.’

The report also points out that while about 56% of sub-Saharan Africa’s urban populations live in slums, waste collection services in these areas are ‘limited or non-existent’, partly due to lack of road access and waste infrastructure. What’s more, although 60% of the continent’s population live in rural areas, those areas have limited or no waste management services. According to Linda Godfrey, principal scientist at South Africa’s Council for Scientific and Industrial Research and the co-ordinating lead author of the report, Africa’s current inadequate waste management is ‘having a negative impact on the economy, society and environment’.

She says there is ‘an urgent need for African countries to address the current waste management challenges and to prepare themselves for the expected growth in waste generation in the coming century’. Godfrey adds that this will require ‘social and technological innovation, and investment in services and infrastructure in the waste and secondary resources sector never before seen in Africa’. The solution will also require the public, private and informal sectors to work together – in those under-serviced slums and rural areas, as well as in the continent’s growing and increasingly crowded metro areas.

In June, for example, the Nigerian government, together with UN Environment and the Global Environment Facility, launched a US$15 million waste management initiative, with a particular focus on e-waste. By some estimates, 357 000 of the 500 000 used computers that come through the Port of Lagos every year are junk and unserviceable – with Lagos (like Accra) serving as a dumping ground for the rest of the world’s unwanted e-waste.

E-waste is only part of the broader solid waste picture. Lagos State’s waste management agency estimates that just 10% of the total 10 000 to 15 000 tons of solid waste produced in Lagos every day ends up being recycled. Most of it goes to the city’s landfills, rivers, waterways and beaches. The new waste initiative hopes to transform Nigeria’s informal recycling sector into a formally legislated system, which will include a small fee on the sale of electronics to subsidise formal recycling. It brings together players from government, private sector and civil society, and is part of the WEF’s Platform for Accelerating the Circular Economy. ‘This project demonstrates how the circular economy can spur economic growth, create jobs and benefit the environment,’ Dominic Waughray, MD and head of the WEF’s Centre for Global Public Goods, said at the launch. ‘As a platform for public-private collaboration, the WEF is delighted by the teamwork between recyclers and electronics manufacturers working side by side with government and international organisations to reach shared goals.’

In South Africa, informal waste pickers – known locally as ‘bagerezi’ – collect as much as 90% of the country’s recycled post-consumer paper and packaging, saving local municipalities up to ZAR750 million in landfill airspace every year. ‘For many years waste pickers have been the “missing link” who remove recyclables from the waste stream and supply them to the recycling industry,’ the Department of Environment, Forestry and Fisheries noted recently. ‘They have played an important role in South Africa achieving a recycling rate equal to many European countries.’

The department, together with the Department of Science of Technology, is co-funding a Wits University research project into waste picker integration initiatives, hoping to develop national guidelines for integrating those informal waste collectors into existing public-private waste management efforts. The university’s Melanie Samson, who has been working on the project, told Ground Up that one of the biggest challenges is that each party has a different understanding of the existing recycling system. Samson said that she had looked to Latin America for examples of models that could be applied in Africa. ‘In countries like Brazil, Colombia and Argentina, you have well-developed models where cities pay for their service,’ she said. In South Africa, however, ‘when a municipality contracts private companies to recycle, they pay the company a collection fee, while waste pickers are not paid for the collection services they provide’.

Samson’s early recommendation is that waste pickers should be invited to participate in decision-making within the waste management process, and be recognised for their public service. This would require government and industry to, as she put it, ‘transform how waste pickers are seen, appreciated and valued by residents, industry and government officials’.

At Ghana’s Agbogbloshie landfill, meanwhile, Accra Mayor Mohammed Adjei Sowah recently announced a new project to strengthen the capacity of local scrap dealers. Sowah hopes that the EUR25 million partnership between the Ghanaian and German governments will transform Agbogbloshie into an environmentally friendly scrap park. ‘Agbogbloshie is the hub of scrap dealings in Accra, and we are aware that in the course of your work, there are a lot of environmental and health concerns that come up,’ he told scrap dealers at the launch. ‘This facility has come at an opportune time to help deal with all those challenges. We want to process the scrap in an environmentally friendly way. That’s the essence, so that nobody will get hurt or die while working. We’ve built a clinic, training centre and a football park. We want to change the narrative of Agbogbloshie as well as gradually move to be the hub of e-waste.’

Across Africa, then, the solid waste management sector has a recurring theme: changing the narrative, and turning the continent’s dump sites into safe, healthy centres of circular economic growth.

The first transshipment cargo has docked at the new deep-water Port of... END_OF_DOCUMENT_TOKEN_TO_BE_REPLACED

A US$50 million trade-finance facility has been created to help support Africa’s... END_OF_DOCUMENT_TOKEN_TO_BE_REPLACED