The South African Reserve Bank (SARB) refers to fintech as a ‘continuously evolving phenomenon that impacts all financial services activities’. The bank’s fintech unit says technology has numerous benefits for the industry, including increased competition between incumbents and new entrants; greater access to markets; reduced costs and greater convenience for consumers. In addition, it has the potential to broaden financial inclusion in South Africa.

Through fintech, new forms of money have emerged, such as crypto assets, mobile money and electronic money, and the world has seen a rise in popularity of crowdfunding, peer-to-peer lending and robo-advice.

While blockchain or distributed ledger technology (DLT) has various applications, its use in financial services is still in the exploratory phase in South Africa. The SARB played a crucial role in Project Khokha, a proof of concept that used DLT to simulate a real-world trial of this payment solution. Although Project Khokha delivered on its goal of giving greater insights into DLT, the SARB cautioned that there are numerous issues to consider – including regulatory issues – before a move to a DLT-based system can be made.

Vishal Barapatre, chief technology officer at In2IT Technologies, says that while many user cases for blockchain applications have been explored across multiple industries – and a few implemented – blockchain still shows the greatest promise in the financial sector. In fact, a 2018 CNBC article reports that some major European banks have even gone as far as to say that it is likely to underpin the entire financial sector within five years.

‘Much of the financial industry is built around transacting; interbank, intrabank and bank-to-customer transactions are the primary focus. The blockchain offers numerous benefits to facilitate and streamline transacting,’ says Barapatre. Its efficiencies and ability to cut out unnecessary players mean that the cost of transacting becomes dramatically lower, he explains. The moment intermediaries are removed, and paperwork and approval processes are cut back, the time and costs saved become exponential.

Barapatre adds that for quick adoption of blockchain technology, banks and other large finance institutions should not only think about business-to-consumer transactions but also bank to bank, or within the bank itself. Often, a person might hold multiple accounts with a bank, meaning that their personal information is lying within the bank and can be cross-utilised. ‘Once you put that on a blockchain, a new customer model can be created where the consensus has been taken from the end user to utilise some of his existing documents for confirmation in other areas.’

Ultimately, it offers a faster way to do things. ‘The impact of the blockchain is such that, if successfully implemented across all financial institutions, we could find ourselves in a position to realise a “freer” industry,’ according to Barapatre. ‘What this means for the financial industry is that they need to react and respond quickly to ensure that they themselves remain relevant and included in this potential new future of finance, backed by a global blockchain.’

Akash Dowra, head of technical marketing at Discovery Bank, says that the evolution of fintech is ‘very exciting’ for the insurance company. ‘Along with Vitality Money, it is a cornerstone of why we decided it was the right time to open a digital bank.

‘We are able to complete the entire compliance process digitally, enabling a paperless onboarding in less than five minutes,’ says Dowra, adding that they have even seen some clients sign up with the bank between 11 pm and midnight. As for security, Discovery’s banking app has proprietary facial recognition criteria with built-in liveliness checks, which helps keep its clients’ bank accounts secure. 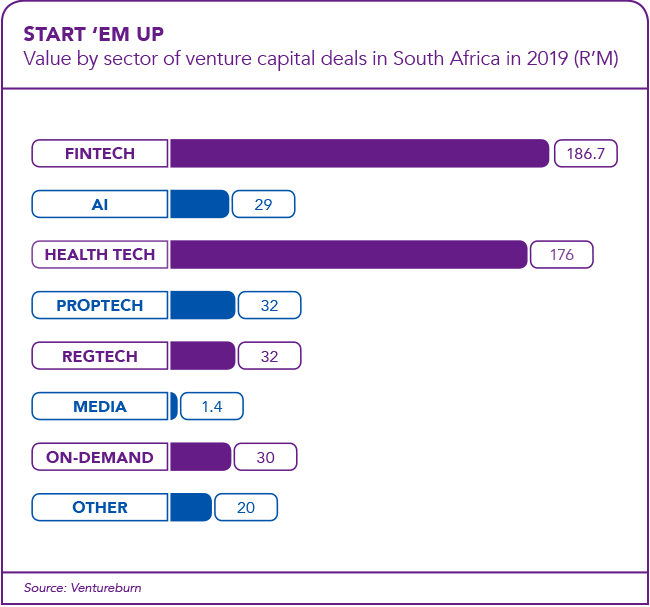 ‘As a behavioural bank, we incentivise our clients to improve their financial health, which should result in loyal clients with lower default risks,’ says Dowra. ‘We can then use these savings to fund the rewards offered.’ One of the key barriers to better financial health is understanding, he says. ‘Through technology, we are able to seamlessly source a client’s financial information and distil it into an easy-to-understand metric – their Vitality Money Status. This would not have been possible 10 years ago, for example.’

Richard de Roos, Standard Bank’s head of foreign exchange, says that if Standard Bank could develop a limited blockchain that reduced failure in the first mile (the very beginning) of foreign-exchange payments and settlement, the bank could offer clients a ‘fully integrated end-to-end blockchain solution that would dramatically reduce the incidence of trade failure while also increasing regulatory transparency’.

He adds that the challenge with DLT is that, for it to be successful, you need to attract multiple users to a single point in the cloud, and make this point available to many other users. This means owning both ends of the system or having thousands of banks and other involved parties around the world all joining and operating the same blockchain.

Private-permission blockchain technology supports the sharing of information among multiple participants on a network, enabling each party to track changes, these being instantly shared with other participants, without the need for a central database. In short: it all takes place transparently, is traceable in real time, and forever recorded in the cloud. De Roos says that Standard Bank’s development of a limited private permission-based distributed ledger is an important first step in growing a scalable private permission-based foreign exchange payments and settlement blockchain ecosystem across the bank’s market on the continent.

‘There are two ways I think about fintech,’ says Chris Becker, blockchain specialist at Investec Private Bank. ‘The first is all of the technologies that sustain innovations. These aren’t changing the way we do things but are helping us to do the same things better. The second is the disruptive technologies that fundamentally change the way we do things – like blockchain.’

Becker says that although blockchain has not yet changed the way the bank does business, it almost certainly will in the future. ‘I think it’s still too new to be impacting our typical and mainstream markets and clients, but that will change. We don’t know when exactly it will, but we need to be prepared.’

In anticipation, the bank is upskilling its staff in blockchain technology. In fact, Investec Private Bank has a team that focuses full-time on this technology to see how best it can be applied. ‘Sending money over the internet through Bitcoin is quite different to sending South African rands to someone in the US,’ says Becker. ‘We need to understand the differences and whether clients want to use this technology or not. If they do, we need to know how to facilitate it.’

Asked how all of this changes the way that Investec interacts with its customers, Becker says he does not feel it changes client engagement at all. ‘Blockchain doesn’t change the human connection but could complement it. What it does mean, however, is that large technology companies – Facebook, Uber, etc – can now compete with us as a bank, without needing to apply for a banking licence. This will force us to get even better at what we do.’

He adds that big banks are not excluded from participating in blockchain or monetary technology, such as Ethereum, Bitcoin, Ripple and others. ‘Many banks seem to be saying, “It’s not what we do”. I don’t agree with that. I think we can participate here. In fact, I think it’s important that banks do participate – that we bring our experience, financial knowledge and expertise to this sector.’

Asked what he believes are the upsides to blockchain, Becker says this depends on one’s point of view ‘To the banking sector, there aren’t many upsides to blockchain because it creates a public utility out of the services banks provide their clients. In a sense, it commoditises banking as a service,’ he says. ‘But from a consumer perspective, it takes on a whole new life.’

Becker talks about the e-sports (electronic sports) industry, and how quickly it has taken off, with winners walking away with millions of dollars in prize money. E-sports are global, internet-based competitions for video gamers, in which anyone in the world – regardless of their location – can participate. ‘Even though it’s small in terms of number of players and mainstream awareness, the prize winnings are now larger than traditional incumbent sports,’ says Becker. ‘I’m starting to see similar trends, huge parallels, between this and blockchain technology. Some of the new businesses being built are big – bigger than incumbents. What happens when these go mainstream? They’ll dwarf incumbents.

‘I think we’ll see something big happen with cryptocurrency. Ultimately, I think if any bank wants to survive, and thrive, it has got to understand this new technology.’

Egypt is building what could be the world’s largest solar hybrid facility... END_OF_DOCUMENT_TOKEN_TO_BE_REPLACED

Targeted insurance is being developed to help protect Madagascar’s farmers against the... END_OF_DOCUMENT_TOKEN_TO_BE_REPLACED

Botswana is on track to become the first country in Africa to... END_OF_DOCUMENT_TOKEN_TO_BE_REPLACED