Companies across the continent are ever-more eager to adopt tech-fuelled solutions to increase efficiency across their business operations. However, building out tech infrastructure can drain resources, particularly for SMEs. In response to the accelerating demand, software as a service (SaaS) is emerging as a critical model for cloud services in Africa, enabling local enterprises to transition into the digital arena.

Software, infrastructure and platform as a service all capture the main benefits of cloud computing – scalability and flexibility being key examples. However, the value proposition of SaaS differs from the other models.

While infrastructure as a service (IaaS) and platform as a service (PaaS) simply provide the resources on which to run applications, the unique value of SaaS offerings is that they remove the need for the user to write their own applications, explains George Etheredge, ICT research analyst at Frost & Sullivan Africa.

This significantly changes the experience of cloud services for customers, in that they deal only with what is essentially the ‘front end’ of the cloud.

This value proposition is what prompts Arthur Goldstuck, MD of market research firm World Wide Worx to suggest SaaS should not be called a ‘pillar’ of cloud computing at all, as SaaS sits above the other foundational pillars of IaaS and PaaS. He notes, however, that as a result of its ‘front-end’ character, SaaS acts as a key driver of cloud adoption.

‘SaaS rests on the cloud foundations of infrastructure as a service and platform as a service, rather than being a pillar of the cloud. It can better be described as the front end of the cloud, or a key reason companies and consumers use the cloud,’ says Goldstuck.

Whether viewed as a pillar of the cloud or sitting atop the infrastructure and platform pillars, what is clear is that SaaS has a vital role in the cloud computing environment, and may come to dominate the cloud market as software service providers innovate around their offerings.

As the cloud computing market begins to accelerate across Africa, both international and local players are rolling out SaaS offerings. However, given cloud services can be delivered from almost anywhere – SaaS essentially being the licensing and delivery of software over the internet – established international companies with plentiful resources are able to enter the African market relatively easily.

Of note among the various global players, Amazon has made a strong push in Africa with its Amazon Web Services suite of more than 50 cloud services, to the extent that the company has established a physical presence on the continent. Google’s G Suite (formerly Google Apps) also dominates the SaaS space around the continent, alongside Cisco’s WebEx services and Salesforce.

‘Geographic location is less of a barrier to entry,’ says Etheredge. ‘As a result of this, the SaaS market in Africa is dominated by large international players.’

While there are a number of African firms introducing innovative SaaS offerings – particularly in South Africa – these will take time to gather momentum, Etheredge argues. And in the meantime, existing international services are being deployed as local businesses seek to adopt the technologies most able to facilitate collaboration and lower costs.

Nonetheless, South Africa and Kenya are held in high regard among Africa’s emerging cloud markets, thanks to two factors, namely infrastructure investment and market willingness to adopt.

‘At this juncture, both countries are viewed as leaders in technological thought leadership, having seen necessary investment in the infrastructure supporting cloud technology, in addition to an upswing in adoption of cloud services by enterprises,’ says Etheredge.

However, Phares Kariuki, CEO of Kenyan cloud provider Node Africa and co-founder of the region’s first automated public cloud platform, Angani, does not agree that the Kenyan market is being dominated by international players. Having been active in the cloud computing space in Kenya for the past 10 years, he believes the environment has been driven by local developers and based on local hosting infrastructure. 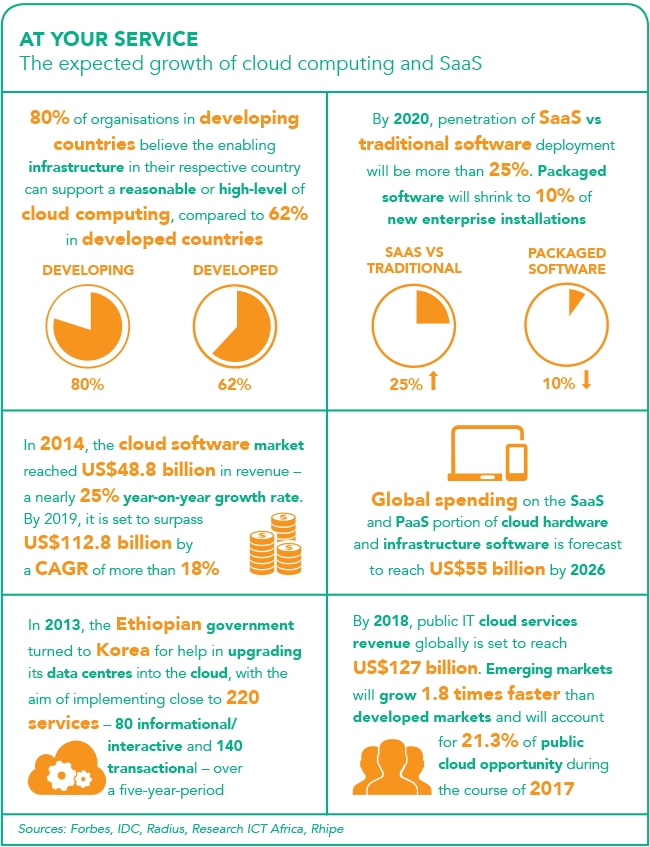 ‘SaaS has been enabled by a large pool of developers locally and a continually improving hosting infrastructure on the continent, which allows for low-latency services to be well delivered,’ says Kariuki.

‘We also have a level of maturity in the local market that has allowed for more consumers to take up SaaS services.’

In fact, Kariuki maintains that through his work at Node Africa – helping companies move their workloads to the cloud – he has seen adoption in Kenya reach similar rates to US and UK markets. This is fuelled by the fact that many local companies are making their first transition from offline to digital operations, he says, adding that he’s seen a lot of progress in the last few years.

‘The primary advantage with Africa is that many of the companies that are generating workloads have no legacy infrastructure, so there’s a real opportunity to be a cloud-first continent,’ says Kariuki.

With years of experience in the provision of cloud services to small, medium and large businesses, Kariuki says SaaS offerings have a substantial impact on the SME sector, given companies are able to access services without having to spend resources on building out the infrastructure and managing it.

‘It saves SMEs a lot of money as they can consume the service without worrying about maintenance and capital expenditure. It also allows them to be more agile as they can consume services without thinking about how to build it out. For example, they don’t need to get server rooms; they simply get a mail subscription and a new employee has access to information within five minutes,’ he says. This potential to save resources is what singles SaaS offerings out as the future of cloud-operating models for SMEs. Without it, many smaller firms could not – or would not – opt to access services that often prove too expensive under conventional pricing models, or where on-premises infrastructure is needed.

As such, according to Etheredge, the SaaS model will prove a key driver of the growth of digital services across Africa’s SME markets. ‘In this way, SaaS serves as an enabler of digital transformation and growth for the SME segment of the economy,’ he says. However, there remain substantial challenges to the accelerated uptake of SaaS cloud services in Africa within the SME sector and beyond.

The most obvious (and arguably biggest) challenges are infrastructure related. For SaaS offerings to be made widely available, the infrastructure needs to be in place, as does reliable internet in order to access cloud networks. ‘For now, the biggest challenge is cost of infrastructure. It’s fairly expensive to get infrastructure on the ground,’ says Kariuki.

‘The other challenge has to do with reliable connectivity. Some internet service providers [ISPs] have figured out how to run reliable networks, but the fact that a few are unreliable poisons the well for the rest. So you have a situation where companies are unwilling to move to the cloud out of fear of downtime because of ISP downtime,’ he says.

Perceptions and knowledge also have an effect on widespread adoption. Cloud computing is widely viewed as insecure, despite the protestations of providers that cloud is more secure than legacy systems.

According to Goldstuck, low levels of education or understanding of cloud and software services in general – particularly in the SME space – also pose challenges to unlocking the real impact of the technologies. ‘Most SMEs aren’t even aware of the fact that they are using SaaS or the cloud when they are using services such as online banking, Gmail and Salesforce,’ he says.

On the other hand, the fact that SaaS services have become so streamlined that companies are making use of them without understanding that they are adopting cloud, bodes well for the quality and accessibility of services being provided, and suggests which model of services will prevail in the future.

‘Ultimately, SaaS will be the dominant pillar in the longer run,’ says Kariuki, adding that infrastructure providers will have to – and to an extent already do – provide some software services on top of their infrastructure offerings.

Ghana has opened its first farmer-owned cocoa fermentation centre. The facility, at... END_OF_DOCUMENT_TOKEN_TO_BE_REPLACED

An initiative supporting efforts to ensure the continuation of education amid the coronavirus... END_OF_DOCUMENT_TOKEN_TO_BE_REPLACED

The Namibian government is rolling out a NAD500 million COVID-19 loan scheme... END_OF_DOCUMENT_TOKEN_TO_BE_REPLACED