Technology is set to start 2017 the same way it finished 2016: as the undisputed disruptor in African markets. In this instance, it takes the form of a smart band worn on the wrist or ankle by fitness fiends all around the world – having the potential to not only reinvent the continent’s health industry but others as well.

These nifty gadgets fall under the category called wearable technology – essentially, electronic devices sewn into items of clothing or worn as accessories – that can track steps, calories burned, sleeping patterns and even observe heart rates.

According to experts, wearable technology devices are expected to gain nearly as much traction as smartphones in the future. In fact, beyond 2020, estimates by Ericsson suggest that more than 30% of consumers expect to walk out of the house wearing at least five wearable devices. And even though basic wearables have a higher share in Africa – 81%, compared to 19% smart technology in the first quarter of 2016 – the International Data Corporation forecasts a compound annual growth rate of in excess of 20% leading up to 2020 for the MEA region (driven primarily by the adoption of smartwatches and wristbands).

The majority of these items are geared towards the fitness industry, many of which are coupled with the use of a smartphone app, and can be seen worn by many individuals (particularly in South Africa) to track their runs, cycle rides or gym workouts.

The local market is led by Fitbit, according to World Wide Worx MD Arthur Goldstuck. He believes the country is one that is very fitness-conscious – making for a perfect target audience. And his sentiment has been matched by a study done through the Mobile Ecosystem Forum, which shows that South Africans are more likely to use mobile technology to improve their health and fitness (at 22% versus the global average of 15%), while Nigerians aren’t too far behind with 17%.

To get people excited about using technology to assist in healthier living, large insurers and medical aid schemes offer incentives to members who buy and use wearables, and share the related health information with the organisation.

This global trend has caught up to South Africa, and one of the country’s most popular medical aid and life insurance services, Discovery, now encourages the use of apps and fitness devices by linking them (some of which include Polar, Garmin, Fitbit, Apple watch, Suunto and TomTom) to its Vitality loyalty programme. Members can earn fitness points through workout activities, number of steps taken or participation in race events, and receive weekly rewards such as smoothies from associated cafés.

Recently, Discovery turned it up a notch by offering its members a chance to receive one of the latest Apple smartwatches fully funded by them if four weekly health goals are met in a month. However, members would need to maintain those goals, otherwise they forfeit the funding.

Garmin is also encouraging people to be more active. In a partnership with mobile network service MTN, the team launched a range of wearable tech watches in Ghana, while MTN offers a free three-month data bundle deal to accompany the consumers’ new ‘toy’.

Now that companies are getting involved in hyping up wearable technology, Frost & Sullivan forecasts global sales to hit a market value of US$40 billion by 2018. This, however, relates only to growth in the consumer market, but it changed when PwC stepped in to show another possibility by conducting a study among South African workers to test the variability of fitness bands’ usage across industries.

According to PwC, the purpose of the research was simply to get a feel of how employees would react to wearables being a daily part of their time at work, and using it to capture health and work-related information. It revealed that more than three-quarters of South African workers would wear one if the data was used to improve their conditions at work. Benefits that enticed workers the most include flexible working hours (76%), fitness incentives (72%), lower health insurance premiums (70%), and free health screenings/annual health checks (59%).

Barry Vorster, PwC leader of people and organisation for South Africa, says that even though many employees are still not comfortable with sharing any of their personal data with their employers, most people can be persuaded if there are advantages for them both personal and in the workplace. ‘Giving employees wearable devices could be a novel and powerful way for employers to gain a better understanding of their workforce and tailor working patterns and office life to their individual needs, ultimately leading to more engaged and happy employees.’

Further exploration into the technology resulted in some innovative approaches. A Kenyan startup called CladLight is developing what is being touted as the region’s first wearable technology – in the form of a jacket that can be used by motorcyclists, with the aim of reducing road accidents.

IT News Africa reports that the smart jacket transmits signals from motorcycles to the jacket to show which direction the biker wants to turn using radio waves – much like a wearable turning signal. The jacket, which comes in two varieties – one that uses batteries and another that draws power from the bike itself – is also fitted with a GPS tracker that enables companies to keep track of riders. 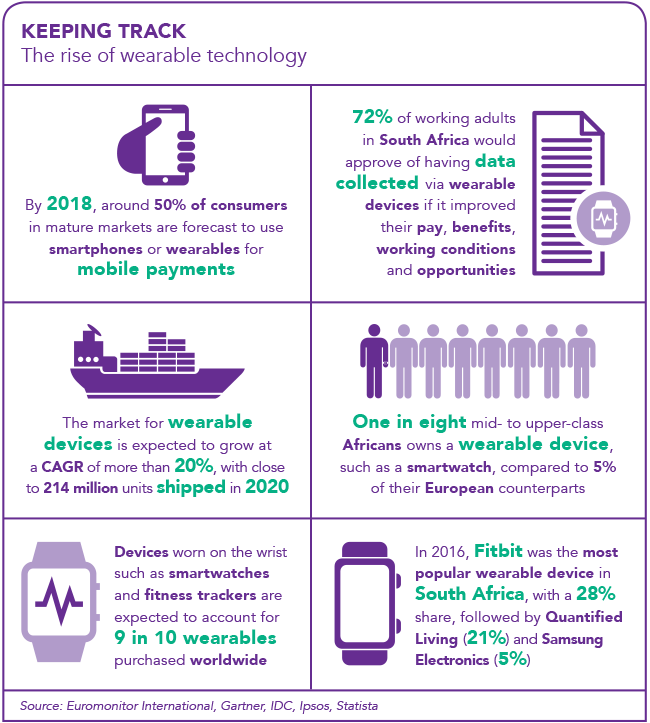 All of this growth might lead to other industries wondering if technology can deliver business benefits for them too. Deloitte says yes. Take the continent’s mining industry as an example – to this day, mining remains one of the most dangerous professions. But technology can help reduce safety risks. According to the financial consultancy’s latest Tracking Trends report, by incorporating computer and advanced electronic technologies into clothing and accessories – such as hats, glasses, gloves and watches – mining companies can potentially cut down on accidents and endangerment of workers.

‘By pinpointing the exact location of underground workers, wearables can allow mine operators to ventilate, heat or cool only occupied areas of the mine – also saving significant electrical costs. Wearable devices can even signal if their wearers are in physical distress, enabling rapid response in the face of accidents or injuries,’ states the report.

Close to 30% of mine managers and senior decision-makers working in mines throughout Africa said they plan on investing in wearable technologies over the next two years, according to a survey conducted by Timetric’s Mining Intelligence Centre.

In an IT News Africa opinion piece, Anton van Heerden, executive vice-president and MD of Sage in Southern Africa, says business owners should be keeping a watchful eye on the wearables market to see how it evolves. ‘From smart glasses to smartwatches, we can expect some interesting use cases to emerge in the next few years.’ As prices of wearables fall, he adds, ‘businesses may find that simple functions such as the unobtrusive alert of a smartwatch offer productivity, collaboration and efficiency boosts that justify their costs’.

Digital data technology, as well as barcode scanning, will be employed in... END_OF_DOCUMENT_TOKEN_TO_BE_REPLACED

Farmers in East Africa have a free, new mobile tool at their... END_OF_DOCUMENT_TOKEN_TO_BE_REPLACED