In addition to being one of sub-Saharan Africa’s most developed economies, Ghana – the first African country to achieve independence from its former colonial power (Britain, in 1957) – has long been a bellwether state, leading developmental trends on the continent. From Kwame Nkrumah’s pan-Africanism to import substitution economics, to the military governments of Jerry Rawlings (1979 and 1981) and democratisation (in 1992), Ghana has been at the forefront of innovation in pursuit of development.

The period since 1992 has marked a new departure, with the Washington Consensus policies (enacted under the tutelage of the World Bank and IMF) becoming increasingly entrenched. These seemed to be delivering results in terms of increasing per capita incomes until the commodities crunch of 2014. That ongoing episode set back Ghana in much the same way as other African oil producers, with a significant fiscal gap opening up. But the country has responded well to the crisis, cutting spending and implementing greater fiscal discipline despite the costs to the welfare of ordinary citizens. These pressures make Ghana’s peaceful regime change (via the recent elections) all the more significant as an indicator of political maturity.

The recent elections are evidence of a successful consolidation of that country’s political system across at least two critical dimensions. The country enters its 60th year of independence having proven both its political stability as well as policy continuity. Ghana, which exports mostly oil, gold and cocoa, has been pummelled by falling commodity prices since mid-2014. However, the government cut spending in 2015, adopted an IMF-backed austerity programme in April 2016, and maintained discipline despite the temptation to spend freely in an electoral year.

The election of Nana Akufo-Addo as the fifth president of Ghana’s Fourth Republic is the first time since civilian rule was resumed in 1992 that the incumbent president has lost an election. Akufo-Addo’s New Patriotic Party (NPP) also won an outright majority in Parliament with 128 seats against the outgoing National Democratic Congress (NDC). It’s also the third time political power has changed hands between parties in this period.

Pundits suggest that the government of the previous president, John Mahama, was punished by the electorate for Ghana’s declining economic performance. GDP growth in 2016 was the lowest in three decades, down to 3.3%. That might not seem at all bad by the standards of the global economy over the past three years but it has been accompanied by an inflation rate of more than 15% and a central bank lending rate of 26%.

The economic life of ordinary Ghanaians has become much harder over the past three years. Voters were particularly angered by the rise in fuel prices in 2016, at a time when international energy prices were falling.

The main reason for this was an increase in taxation – the Energy Sector Levy – as the government desperately tried to deal with the budget deficit induced by the global fall in commodity prices. Increases in the prices of electricity (59%) and water (67%) also fuelled resentment, as did perceptions of extensive corruption and mismanagement, especially around Ghana’s emerging oil and gas industry.

The decision of Ghanaian voters to place responsibility for national management in new hands is particularly significant as the NPP represents the more pro-business side of the country’s parties. The previous ruling party, the NDC, was a member of the Socialist International, an umbrella body for social democratic parties worldwide.

However, Ghanaians point out that the conventional ‘left-right political spectrum’ is not especially useful in describing the orientations of the country’s two main parties, corresponding only to broad tendencies, not specific policy platforms. However, the NPP is seen as even more committed to private sector-led growth.

Akufo-Addo has promised to cut taxes and, after his inauguration in January, announced that Ghana was once again ‘open for business’.

During the election campaign, Akufo-Addo was outspoken on pro-business issues. He promised to reduce ‘burdensome regulations that reduce private investor confidence’ and to eliminate ’the impact of last-minute changes in regulation, such as tax increments or investment registration fees introduced by government agencies, [which] can be confusing and costly for business’.

Ghana was already one of Africa’s success stories. The country achieved its goal of reaching middle-income status in 2011, albeit at the bottom end of the range (defined by the World Bank as a per capita income of US$1 036 to US$ 12 615). The country’s per capita income reached nearly US$1 700 in 2015. Some of Ghana’s surge is attributable to the discovery of the Jubilee oilfield, which came into production in 2010. But the oil industry has been somewhat disappointing and currently still generates less in foreign earnings than the cocoa industry.

Unlike some carbon-rich developing nations, however, Ghana has not bet everything on the oil and gas industry. Since independence, the country has pursued some sort of industrialisation policy, and today the country has sectors that were unimaginable at independence – motor assembly and manufacturing, agroprocessing, electronics, aerospace, software engineering and IT. However, it is widely acknowledged that further development will require a resolution to the electrical power bottleneck.

Ghana has also developed strong commercial property and financial services industries over the past two decades. Developments such as Marina Mall and Airport City have transformed Accra’s skyline and attracted foreign investors from South Africa, Korea, the Middle East, China and Eastern Europe. Residential property transactions alone are reported to be worth US$1.7 billion per annum. 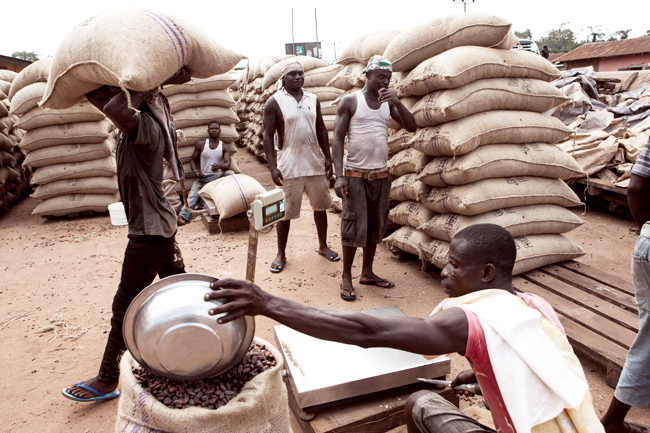 The country’s traditional staple – cocoa – has continued to dominate agricultural production. The country is the world’s second-biggest producer of cocoa after neighbouring Côte d’Ivoire and accounts for one-quarter of global supply. The industry is dominated by 800 000 smallholder farmers who play an important role in Ghana’s political stability.

These farmers are insulated from international market volatility by the national industry regulator, Cocobod, which sets a guaranteed minimum price. This mechanism, however, has its own set of problems. Cocobod has been criticised as inefficient and a hurdle to private-sector participation. Farmers receive around just 70% of the market value of the crop in a good year, although they do get more when the market drops. Another problem is that the price offered in Ghana is usually lower than that in neighbouring Côte d’Ivoire.

The two countries have similar climates and almost exactly the same area under cultivation. Yet Côte d’Ivoire’s farmers produce twice the volume of Ghana’s industry (1.6 million tons versus 700 000 tons in 2014/15).

It remains to be seen whether the incoming Akufo-Addo government will be prepared to grasp the nettle and reform this heavily controlled industry.

Ghana was called the Gold Coast under colonial rule for good reason. It is the continent’s second-largest producer of the yellow metal after South Africa, and it has a history of gold mining that goes back 1 500 years. It was from the mines of Ghana that the great medieval kingdoms of the region traded gold across the Sahara desert. But the gold price has trended downwards in the last months of 2016, which means that this sector will not be bailing out the rest of the economy.

Ghana’s three main exports – oil, cocoa and gold account for very similar proportions of the country’s foreign exchange portfolio. None are currently performing especially well on international markets. This, however, is a country with more than one string to its bow. Diversity, combined with the political maturity demonstrated in the 2016 election should enable it to weather the current economic problems and return to sustained growth.

Digital data technology, as well as barcode scanning, will be employed in... END_OF_DOCUMENT_TOKEN_TO_BE_REPLACED

Farmers in East Africa have a free, new mobile tool at their... END_OF_DOCUMENT_TOKEN_TO_BE_REPLACED