The World Bank, in its Doing Business 2017 report – which investigates and measures the regulations that both help and hinder business activity in various countries – lists South Africa as 74th out of 190 countries when it comes to ease of doing business.

It measures 11 different factors, including starting a business, registering property, getting credit, paying taxes, trading across borders, enforcing contracts and resolving insolvency, among others.

Deepa Vallabh, director of corporate and commercial, and head of cross-border M&A Africa and Asia at Cliffe Dekker Hofmeyr, says that South Africa’s borders are fairly open to trade. ‘In the context of Africa, I think that South Africa is an easier jurisdiction than most.’

Vallabh adds that the regulatory process is – with some exceptions – smooth, as company set up can be done relatively quickly, forex approval can be obtained promptly, and the Competition Commission is very efficient. ‘We do have some roadblocks, though these are sector specific, such as in mining, but overall I would say – if looking at the continent – that the relative ease of entry into our market is among the top countries,’ she says.

Dermot Gaffney, head of tax markets at KPMG South Africa, says that while the country is an open economy, most African countries rank poorly when it comes to ease of doing business. ‘We are not making it easy for people to do business on the continent. I think more formalisation of the various trade blocs would help. This at least gives certainty on doing business for a number of countries at a time.’

Gaffney believes we are also overburdened with policy and regulation. ‘The reality is that it’s a lot easier to do business from outside Africa into it, than intra-Africa. Look at, for example, the number of double tax agreements [DTAs]between African countries versus those with countries outside the continent. This is important because if you have a business in an African country as well as your home country and there is no DTA between them, you can pay tax twice.’

According to Pieter Steyn, Werksmans Attorneys director and chairperson of Lex Africa, if you look at the figures for intra-African trade, only 10% of total African trade is between African states. ‘African countries are still trading mainly with non-African countries, though governments are trying to increase this,’ he says, adding that while free-trade areas have their benefits, they also have downsides.

‘If you have a free-trade area, governments lose revenue. Often, free trade areas have been signed but not ratified, or if ratified they have not been fully or properly implemented. Some countries still impose import duties even though they are part of the SADC Free-Trade Area, for instance,’ says Steyn.

Andrew Skipper and Ian Jacobsberg, partners at Hogan Lovells, explain that South Africa is party to a number of bilateral and multilateral agreements with other states, concluded for the purposes of facilitating and regulating international trade. In addition, several local statutes affect both importation and exportation of goods, including the International Trade Administration Act.

Other legislation that has a bearing on international trade are the exchange control regulations – which monitor the outflow of money from South Africa – and the Customs and Excise Act, in terms of which duties are imposed on goods being imported.

International trade requires an understanding of both local and regional laws, as well as multilateral treaty provisions, says Jacobsberg. ‘This plethora of regulations can make international trade a complicated process. In addition, many countries have laws in place designed to protect local industry from international competition and to protect local consumers from the harmful effects of substandard imports, especially foodstuffs, medicines and cosmetics.

‘While trade would be facilitated by a liberalisation of these regulations, it must also be recognised that, in many cases, they are put in place to protect legitimate interests, and traders doing cross-border business must factor in the costs of compliance,’ he says.

Steyn describes the matter of local versus imported a balancing act. ‘It’s a question of negotiating position and power, and finding the balance between protecting local business and jobs, and promoting our exports. While we are relatively liberal when it comes to trade barriers, there are problems, for example, when it comes to imports – particularly cheaper imports where locals cannot compete.

‘So, while exporters may benefit, local producers are sometimes hurt by imports, for example, those in the steel, chicken and textile industries. Some businesses, and some sectors, might suffer because of trade liberalisation. This raises the question of, do you protect consumers and let them benefit from a cheaper price or do you protect those industries and the attached jobs? Government must decide where to draw the line. If you protect local industries that cannot compete against cheaper imports, local consumers will be paying higher prices. It’s a double-edged sword.’

Regulations and legislation aside, there are many practicalities involved in cross-border trading. Vallabh cites ease of entry, the ability to complete a transaction within a reasonable timeframe, ease of cash flow in and out of countries, and exchange control regulations as some of the most important. Steyn adds logistical difficulties, immigration, work permit and visa issues, and infrastructure concerns, including the availability of road, rail and air links. 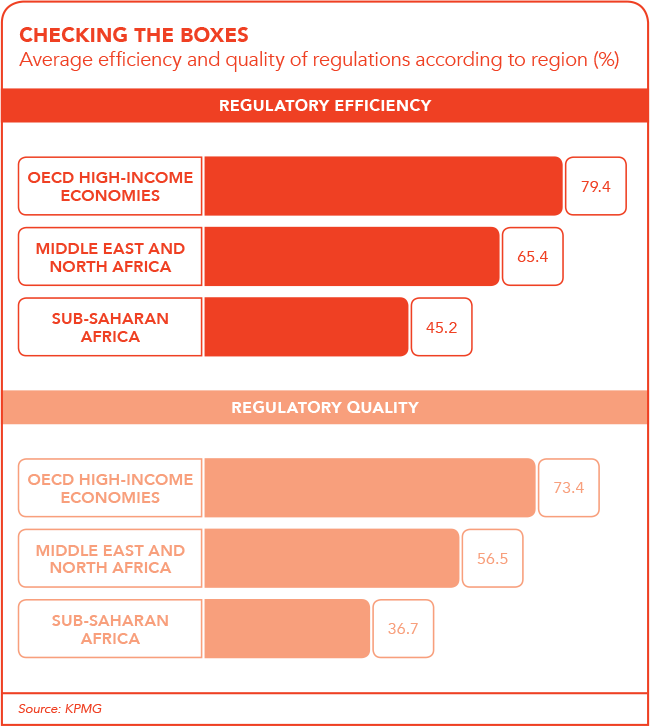 Indeed, according to the Doing Business report, a study analysing the importance of trade logistics found that as little as a one-day delay in transit time reduces exports by an average of 7% in sub-Saharan Africa. Gaffney adds the all-important factor of receiving payment to this list. ‘It may be obvious but there’s no point selling if you don’t get paid,’ he says. ‘There’s a problem across the continent in that a lot of countries in Africa don’t have sufficient foreign country reserves to pay for what they’re buying. For example, in Nigeria you cannot get paid in US dollars, you have to take payment in local currency.’

What about the risk involved in such international business dealings? ‘There is no statutory requirement that goods imported or exported must be insured,’ says Jacobsberg. ‘It is, however, a question of good commercial practice, having regard to the fact that the goods are likely to be handled by several intermediaries, that goods transported across borders are insured. The logistical difficulties and expense involved in international litigation also dictate that it makes commercial sense to take out credit insurance on the price of goods exported.’

According to Stephen Meltzer and Meluleki Nzimande of the Webber Wentzel trade team, goods insurance is generally subject to the specific transaction agreements concluded by trading companies. For example, a marine insurance contract is a contract of indemnity and provides the insured with an indemnity against loss.

Steyn speaks in favour of having a local point of contact when doing business across jurisdictions. ‘When you are dealing internationally, you are away from your home base, so you need to have an understanding of what the risks are, and you need to have boots on the ground,’ he says.

Werksmans, through LEX Africa – an alliance of law firms in 22 African countries formed by the company in 1993 – works with clients in countries across the continent, offering them advice and solutions founded in local understanding. For instance, LEX Africa’s Guide to Insolvency in Africa helps clients navigate matters concerning what to do if a client they work with goes insolvent.

The various issues associated with cross-border trade, while they are plentiful, are not insurmountable, says Steyn. ‘Politicians should actually get together and sort this out. But that needs political will on both sides.’ Looking to the future, he believes that one of the greatest challenges will be increasing trade and investment into Africa. In this regard, a lot hedges on governments coming together to facilitate trade, he says.

Gaffney agrees. ‘The challenge is how to make intra-Africa trade a reality given the size and fragmented nature of Africa. While we may speak of the continent as if it were one single market, we need to recognise that there are 54 sovereign nations, at very different stages of economic development.

Digital data technology, as well as barcode scanning, will be employed in... END_OF_DOCUMENT_TOKEN_TO_BE_REPLACED

Farmers in East Africa have a free, new mobile tool at their... END_OF_DOCUMENT_TOKEN_TO_BE_REPLACED