For decades, the story of African television has been that of MultiChoice. The Naspers flagship (at least, until Tencent came into the picture) started as M-Net in 1986, when it was one of just two pay-TV channels in the world, before exploding into the satellite giant DStv, which is now available in around 50 countries across Africa.

That growth has brought competition, however, fuelled even further by the emergence of digital technologies. In 2010, Nigeria saw the launch of iROKOtv, a mainstream digital platform that provides on-demand movies from the country’s famous Nollywood film industry. For years, iROKOtv was known as the ‘Netflix of Africa’, as its streaming services model bore a striking resemblance to the US giant.

Then in January 2016 Netflix itself came to Africa, and that’s when things got really interesting. Netflix is notoriously coy about its subscriber numbers but by mid-2018, MultiChoice estimated that the California-based company had already grown its South African subscriber base to between 300 000 and 400 000. ‘That’s a significant number in two-and-a-half years,’ MultiChoice South Africa CEO Calvo Mawela said in an interview with MyBroadband, adding that MultiChoice had lost more than 100 000 DStv Premium subscribers in its previous financial year.

Another local streaming entertainment provider, Cell C’s Black told MyBroadband that while it acknowledges Netflix as a competitor, it ‘does not see it preventing media companies from thriving locally’. According to Black’s chief executive of content Surie Ramasary: ‘Netflix has built up a global brand by offering customers movies that are no longer in the rental pay window. This means content on our platform will have movies before they are on Netflix.’ She adds that Netflix does not offer local content in every market, including South Africa. ‘This is where we will have a competitive edge. In addition, we will also start to build a library of our own originals over time.’

PwC’s annual Entertainment and Media Outlook report, published this year, supports that argument. ‘Internet video’s success continues to grab the headlines here but, in the short term at least, the likes of Netflix and Amazon Prime will likely be taken as a complementary service due to their dearth of premium entertainment content in the South African market,’ the report notes. It adds that the arrival of over-the-top (OTT) platforms such as Netflix and Amazon Prime Video provides MultiChoice with competition, ‘but the latter’s access to premium sporting rights and major entertainment content means that in the short term the newcomers will most likely be taken as a complementary service, which will leave the pay-TV market little changed’.

Then – as if in direct response to that criticism around Netflix’s ‘dearth of premium content’ and its lack of local African content – two things happened. In July 2018, Netflix broke HBO’s 17-year run of receiving more Emmy Award nominations than any other US network. In a year when Netflix announced plans to spend as much as US$13 billion on original programming, it topped the Emmy nominations list with 112 – four more than HBO’s 108. In September, Netflix purchased the global rights to Lionheart, its first original film from Nigeria, and it debuted the African documentary City of Joy, featuring 2018 Nobel Peace Prize laureate Denis Mukwege. 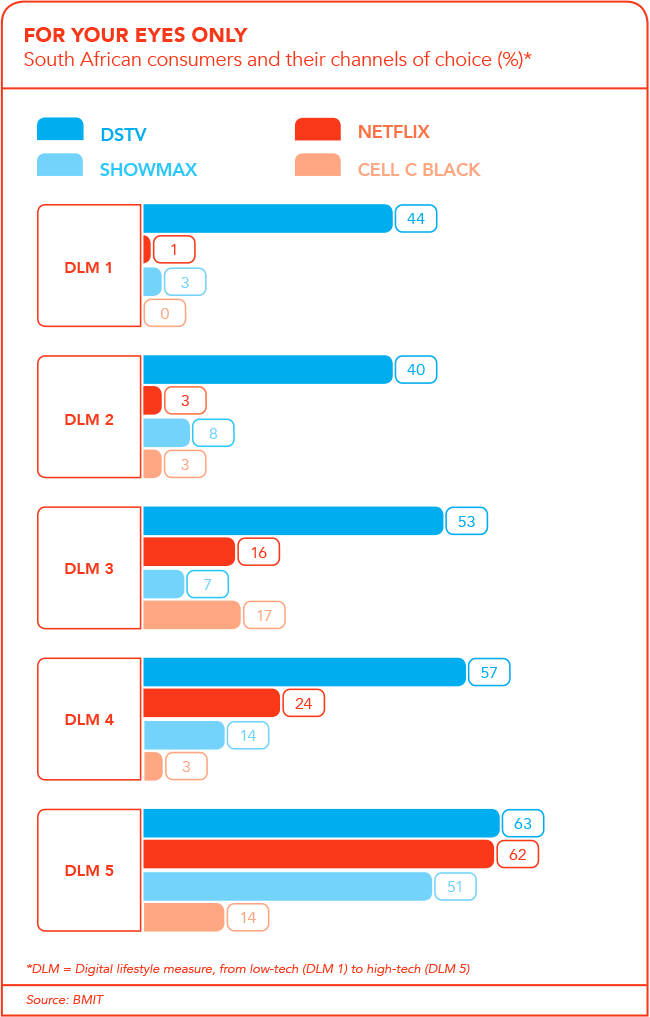 In business, as in all things, the viciousness of a fight is often an indication of what’s at stake for the winner and the loser. That’s certainly the case in Africa’s increasingly competitive streaming entertainment space. In mid-2018, the South African regulator, the Independent Communications Authority of South Africa (ICASA), moved to address what it regards as MultiChoice’s ‘market dominance’ by placing further regulations on the firm. In its almost 600-page submission to the hearings, MultiChoice argued that more regulations would kill DStv’s business.

It then insisted that any regulations should apply to the whole pay-TV sector – including OTT services such as Netflix, Amazon Prime, YouTube and Facebook. It argued that those OTT services ‘do not pay tax’ in South Africa, nor do they contribute levies to organisations such as the Media Development and Diversity Agency, or the Universal Service and Access Agency of South Africa. They do not pay broadcasting licence fees, nor are they subject to BEE regulations. Again, Multichoice pointed to those 100 000 DStv Premium subscribers it lost during that previous financial year to its ‘unregulated’ competition.

The argument sounds eerily similar to MTN and Vodacom’s appeals for regulatory framework changes in 2016, when the local mobile providers lost market share to OTT services such as WhatsApp and Skype. As Vodacom and MTN learned – and as Multichoice is realising, to its horror – it’s a sound argument, but it’s also a fight that simply cannot be won in the modern technological landscape.

As rivals across the industry have pointed out, when disruptive technologies start costing you money, your only option is to respond with a better service offering. MultiChoice’s Mawela insists that DStv has done exactly that. ‘Many people forget that we launched Showmax way before Netflix got into the country,’ he says. Indeed, Showmax launched in South Africa in August 2015, and within a year it expanded its global service to 65 countries. The idea of ‘way before’ is not entirely accurate, given Netflix’s January 2016 launch, but his broader point still holds.

While the MultiChoice-Netflix head-to-head battle may make for interesting viewing, in terms of Africa’s streaming entertainment market, it’s only a part of the bigger picture. The growth of that market has certainly been fuelled by competition, but it’s been built on the massive roll-out of high-speed fibre connections across the continent. As more households gain access to broadband internet, and as uncapped prices drop, streaming video is becoming an increasingly viable alternative to satellite television broadcasts.

By 2018, the tipping point had been reached. DStv Premium would now set you back R899 a month, while households could get Netflix plus an uncapped 10 Mbps fibre to the home (FTTH) line for R838. Around the same time, Netflix deployed a dedicated service in Nigeria to help deliver fast-streaming content to its users. Meanwhile, Multichoice’s Showmax continued to battle with slow speeds and server capacity.

Now African consumers are enjoying a wealth of streaming entertainment choices, ranging from Showmax to Netflix, Amazon Prime, iROKOtv, Black, Kwese Play, YouTube and more. DStv’s announcement that it would launch a streaming service of its own in 2019 only adds to the complexity of the market.

Egypt is building what could be the world’s largest solar hybrid facility... END_OF_DOCUMENT_TOKEN_TO_BE_REPLACED

Targeted insurance is being developed to help protect Madagascar’s farmers against the... END_OF_DOCUMENT_TOKEN_TO_BE_REPLACED

Botswana is on track to become the first country in Africa to... END_OF_DOCUMENT_TOKEN_TO_BE_REPLACED