Sometimes the looniest ideas provide the most effective solutions. Puzzled by how best to deliver internet connectivity to billions of people living in the most remote parts of the planet, Google’s parent company Alphabet launched the Loon project.

The idea is marvellously simple: just take the most essential components of a cellphone tower, pack them into a flight capsule, add on some solar panels and a few patch antennas, attach them all to a durable, high-altitude balloon, and send the balloon 20 km up into the stratosphere. There, from the edge of space, the Loon balloon provides an aerial wireless network with 4G-LTE speeds to the remote villages and communities living on the ground below.

It may sound crazy – and the effectiveness of the Loon network remains a topic of debate – but the Loon concept is at least a practical alternative to Africa’s fibre roll-out, which involves the deployment of thousands of kilometres of optic fibre to connect small villages, farms or mines located in outlying areas.

Loon’s balloons are a smart solution, but there’s a sense in the market that they are best used as short-term stopgaps – like when mobile companies in Peru and Puerto Rico used them recently to supplant cellphone towers that had been knocked down by natural disasters. For a more lasting solution, Africa’s telecoms companies are now looking to satellites.

‘Once thought destined to be obsolete as mobile and fibre networks were ever increasing penetration in Africa, high-throughput satellite services are proving they can deliver on today’s customer expectations for high-speed affordable connectivity in areas where even mobile networks do not reach,’ says Michèle Scanlon, MD of iWayAfrica, a subsidiary of pan-African provider Gondwana International Networks (GIN). 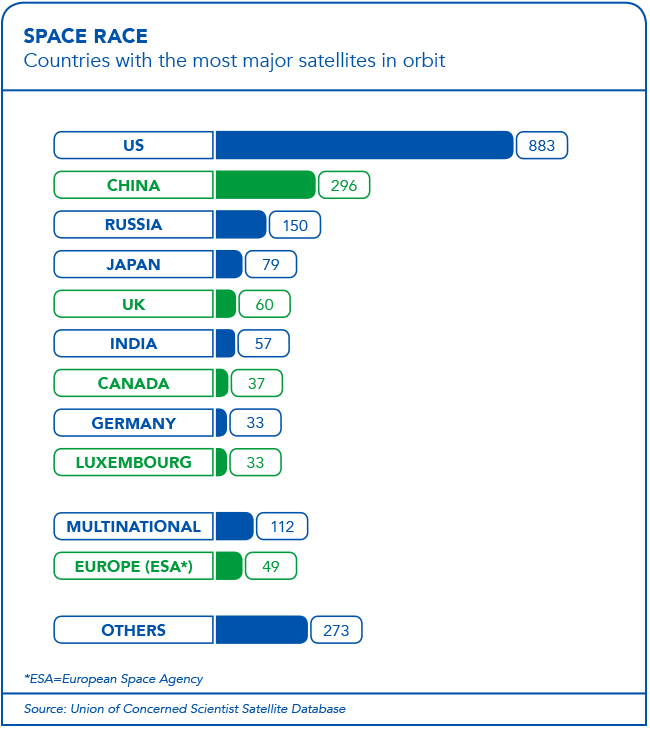 She points out, however, that while satellite is often the only means of delivering broadband connectivity in Africa, there have been little to no price improvements on VSAT modems. ‘Customer-premises equipment pricing remains amongst the biggest obstacles to the successful roll-out of satellite broadband on the continent,’ she says. ‘Until we see large reductions or innovative financing approaches for end-user satellite modems, the utopian goals of mass-scale satellite broadband penetration in Africa may be limited.’

Nevertheless, the race is on. In February 2019, OneWeb sent its first six satellites into space, in the first wave of a planned 650 units that will ultimately make up an interconnected network, or constellation. As CEO Adrian Steckel told CNBC, those satellites will provide internet coverage across the entire globe, making OneWeb – as Steckel put it – ‘the largest internet provider by square miles covered’.

OneWeb is just one of many companies – including SpaceX, Amazon, Hughes and Gondwana – that are racing to launch their own satellite internet constellations. They will be competing against each other in orbit, and also against all the ground-based telecom giants.

In June, Elon Musk’s SpaceX launched 60 satellites as part of its Starlink constellation, which will consist of nearly 12 000 internet satellites by 2027. SpaceX claims that Starlink will provide internet data speeds that are about 50% faster than existing fibre-optic cables, with potential customers including remote areas, airplanes, ships and cars.

Amazon, meanwhile, plans to establish a constellation of 3 236 satellites in low Earth orbit (LEO), again aiming to reach areas with poor or no internet connectivity. The secretive Project Kuiper would tap into the ground-based infrastructure that’s been built for Amazon Web Services. ‘Amazon’s mission is to be Earth’s most customer-centric company, and the Kuiper System is one of our ambitious projects to fulfil this mission,’ the company says in an application to the Federal Communications Commission. ‘The Kuiper System will deliver satellite broadband communications services to tens of millions of unserved and underserved consumers and businesses in the United States and around the globe.’

In Africa, GIN subsidiary AfricaOnline recently launched its JOLA service, a high-speed broadband satellite service powered by Avanti’s HYLAS4 satellite. The service has 100% coverage of Ghana through multiple spot beams, so even the most remote locations can be connected. Speaking at the launch event in Accra, AfricaOnline Ghana MD Foster Plender promised download speeds of up to 35 Mbps. He also highlighted how Ka-band JOLA solutions are meeting the needs of rural judiciary courts, agriculture services, e-learning initiatives, remote hospitality lodges, micro-finance institutions, and CCTV and machine-to-machine applications for construction and national manufacturing plants across Africa.

AfricaOnline’s announcement a few months shortly after US-based Hughes Network Systems confirmed that three African telecom companies had selected its Hughes JUPITER System to deliver satellite broadband services. ‘Hughes is committed to the growth of our operations in Africa, and we have tripled our dedicated sales and engineering support across the continent to serve growing broadband demand. Our JUPITER System enables service providers to improve their offerings and deliver a wide range of applications supporting economic and social development across Africa, helping close the digital divide, which is our global mission,’ says Hughes’ regional director: international Dharmendra Singh, reflecting the growing appetite for satellite technology across the continent.

And it really is a growing appetite. In a recent opinion piece, Bernard Greyling, chief technology officer at satellite provider MzansiSat, claims that while fibre is by far the fastest technology available at the moment, satellite may well be a better solution for Africa’s needs.

‘The more fibre systems we deploy in South Africa, the slower the broadband provided by these networks will become as they begin to buckle under the pressure of increased demand,’ he writes. ‘The technology is also extremely difficult to install and maintain because the fibre networks still require a physical plug-in, meaning that cables need to be laid. These cables are made of glass and are really fragile so if they break, the infrastructure needs to be repaired through the same painstaking process required to lay the cables in the first place – often involving the digging up of roads and walkways.’

Greyling goes on to write that a local satellite broadband provider could offer fast, accessible and reliable connectivity at an affordable price while saving on these mobile connectivity costs. ‘The offering, therefore, can’t be compared to fibre which, while cheaper, doesn’t provide users with the same access,’ he writes. ‘Fibre is, after all, still linked back to plugs and cables, whereas with satellite broadband, as long as you can see the sky, you are connected.’

But what, exactly, are you connected to? In an online post for the WEF, Peter Lyons of investment firm Lapa Capital and Riad Hartani of advisory firm Xona Partners note that, ‘while “connecting the unconnected” is a noble and politically satisfying aspiration, in the medium term LEO networks will not provide an affordable standalone option for connecting people not yet connected to the internet’. Instead, they argue, LEO operators such as SpaceX and OneWeb could play an important role – if only indirectly – in expanding the reach of terrestrial mobile broadband and 5G.

‘The limited reach of terrestrial fibre-optic networks is a major impediment to expanding the reach of 5G networks beyond densely populated urban areas,’ they write. ‘As mobile operators look to expand 5G coverage beyond high-income, high-density business districts, LEO networks could provide them flexibility for bridging gaps in fibre-optic networks. By mid-2022, LEO networks should begin expanding the edge of 5G networks beyond the geographical reach of existing fibre infrastructure. In a similar fashion, they could be complementary and, in some cases a substitute to undersea cables on some routes.’

As more satellites are launched into orbit – remember, Amazon alone has more than 3 000 in the pipeline – Africa could soon see the gaps in its fibre networks being closed by those LEO eyes-in-the-skies. While 5G connectivity may be the ultimate goal, for millions of people in Africa’s most remote areas, any kind of connectivity is a very good start.

Côte d’Ivoire has become the second country to take delivery of COVID-19... END_OF_DOCUMENT_TOKEN_TO_BE_REPLACED

Nigeria is set to commence work this quarter on a complete overhaul... END_OF_DOCUMENT_TOKEN_TO_BE_REPLACED

Burundi and Rwanda are going ahead with plans to build a multi-purpose... END_OF_DOCUMENT_TOKEN_TO_BE_REPLACED