Well, that was quick. The dust has barely settled on the upturned metro pavements, and Africa’s broadband fibre infrastructure roll-out is shifting – already – into phase two. In Kenya, Safaricom more than doubled the number of customers it has connected to its fibre-to-the-home (FTTH) and fibre-to-the-business (FTTB) networks in 2019, reaching a total of nearly 300 000 households and 2 400 businesses. Meanwhile, research from Africa Analysis found that by June 2018, South Africa already had 457 000 FTTH/B connec-tions – and that was more than a year ago.

The initial roll-out was, naturally, in the major economies and in the major metros – in other words, in the easy-to-reach places. It’s one thing to hook up the Johannesburg CBD or Cape Town’s suburbs, or a small island such as Mauritius (where FTTH penetration was already at 64.61% by mid-2018). It’s another thing entirely to get fibre-optic cables rolled out and connected in Africa’s remote, rural or under-developed towns and countries.

Welcome, then, to phase two. This is where Africa’s fibre story gets really interesting. In South Sudan, for example, Liquid Telecom recently announced plans to make its broadband network available to thousands of homes, businesses, government institutions and other organisations, via a 300 km fibre backbone operating from the Ugandan border. They will be linked to the One Africa network, which stretches 70 000 km across 13 African countries and into the rest of the world. 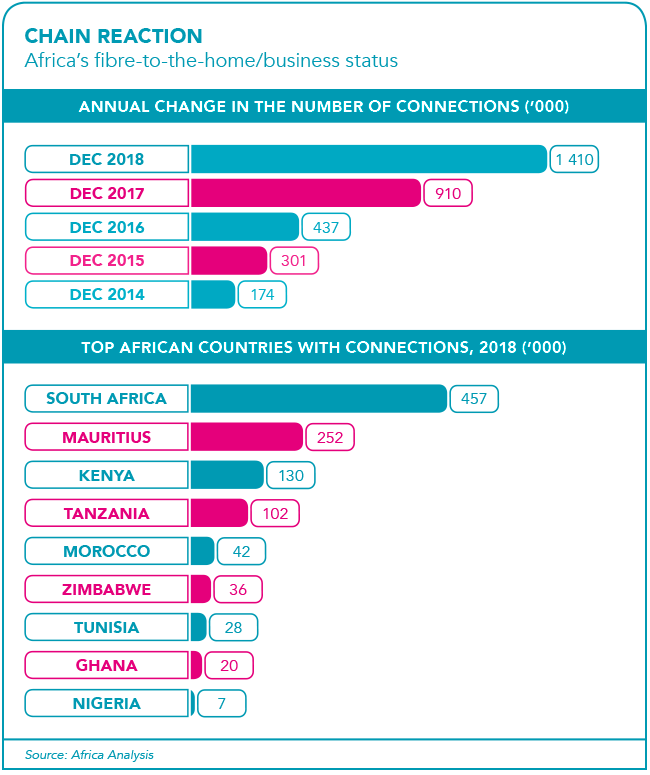 Masiyiwa is talking about South Sudan, but he could easily have been referring to Sierra Leone (which recently confirmed a US$30 million loan agreement to finance its contract with Huawei for the second phase of its National Fibre-Optic Backbone project), or Ghana, or any other African market.

In Zimbabwe, for example, state-owned TelOne recently capitalised on its US$98 million loan facility from China’s Exim Bank to complete the Beitbridge-Masvingo-Harare and Beitbridge-Bulawayo-Harare Backbone Fibre-Optic links projects. Zimbabwean President Emmerson Mnangagwa expressed hope that the project would enhance local connectivity and reduce costs, while also strengthening trade links with neighbouring countries Botswana, Mozambique, South Africa and Zambia. ‘We note with pride that the establishment of these fibre links has completed the connectivity of Zimbabwe with our neighbouring countries […] the link will also provide transit services that enable SADC members to [connect to] the whole world through a robust fibre network,’ he said.

Meanwhile, network provider Paratus confirmed the roll-out of the 4 160 km Trans-Kalahari Fibre (TKF) network, which links the West Africa Cable System (WACS) undersea cable landing station in Swakopmund, Namibia, to the EASSY undersea cable landing station in Dar es Salaam, Tanzania. It’s a significant development, allowing Paratus to deliver WACS capacity to landlocked countries such as Botswana and Zambia – both of which are large, remote, hard-to-reach places when it comes to broadband connectivity. Paratus notes that the TKF route would normally take more than 60 hours to travel by car. By using its fibre connection, however, information can travel that route digitally in just 31 milliseconds.

Liquid Telecom’s ambitious Cape-to-Cairo terrestrial fibre network, One Africa, recently received a US$180 million shot in the arm via an investment from British development finance agency CDC Group. It will use that money to deepen its reach into the continent’s most remote areas, bringing fast network speeds to parts of Africa that until recently didn’t have internet connectivity. Once completed, the One Africa network is expected to bring significant economic and social benefits, in line with Masiyiwa’s vision to connect Africa from north to south, as well as east to west.

On a practical level, because it’s running overland (and not via undersea cables), it will be the shortest direct fibre route between South Africa and Egypt, which will result in significantly reduced latency between African countries. It’s a massive undertaking, though. Building the One Africa network has already required establishing the first fibre links over the Limpopo and Zambezi rivers, and building optic networks with repeaters every 400 km (instead of every 200 km, as is standard).

The further and the deeper companies such as Liquid Telecom, Paratus, TelOne, Vox and others go, the more people they will reach, and the more complicated their infrastructure roll-outs will become. In May, South African operator Telkom went live with fibre connectivity at Orlando West High School in Soweto, with Telkom CEO Sandile Maseko calling it the start of a broader investment into the country’s 26 000 estimated schools. ‘Our focus is to ensure that many South Africans are connected to quality and fast internet,’ says Maseko. ‘With more people connected, the less the data will cost.’

Other operators are doing similar work in South Africa’s townships and rural areas. In August, Vumatel announced that it was connecting 900 000 households in Ekurhuleni and 450 000 in Soweto, while Frogfoot confirmed it was working eastwards along the N4 highway through Witbank and Middelburg. Out in the remote North West province, local fibre provider TrueCom is delivering 100 Mbps uncapped FTTH to thousands of clients on farms and in small settlements around Lichtenburg, Klerksdorp and Ventersdorp.

As Vox CEO Jacques du Toit told ITWeb in an interview published in September: ‘All fibre operators are slowly but surely moving away from the big cities to the secondary towns. So we have started in Richards Bay, we have done deployment in Bloemfontein, and now we are extending the network. Our board has approved plans to connect 200 000 households in the next 18 months. We only started in 2015; that’s only four years of us being in the market. We are in the process of expanding, starting in Soweto and we are going live in the next 15 days in Protea Glen.’

The next step – as outlined by Huawei South Africa’s chief strategy architect Miguel Geraldes at the 2018 MyBroadband Conference – is to use those additional fibre connections to enable 5G networks across Africa. As the next evolution of wireless networking, 5G offers potential speeds hundreds of times faster than the current 4G consumer networks, coupled with very low latency. Geraldes dismissed fears that 5G would make FTTX redundant. Quite the opposite, in fact. ‘5G will not replace fibre,’ he said. ‘There is actually huge synergy between the two technologies.’

Part of that synergy has to do with the reduction in coverage area per 5G site, which requires more fibre connections to more base stations. ‘We are expecting in 5G a radio network range decrease from 800m to 300m,’ Geraldes told the conference. ‘What that means is that a fibre connection is required at all of the sites. A wide range of fibre deployment is required for 5G deployment. This will be a huge opportunity for South Africa to deploy fixed broadband at a larger scale.’

By some estimates, when 5G technology truly arrives it will require a fibre densification five to ten times greater. That means more base stations; more fibre (as Geraldes explained); and even more fibre providers digging up pavements in cities, suburbs and out-of-the-way places across the continent.

Africa’s FTTX story is by no means over, then. If anything, it’s only just beginning.

Egypt is building what could be the world’s largest solar hybrid facility... END_OF_DOCUMENT_TOKEN_TO_BE_REPLACED

Targeted insurance is being developed to help protect Madagascar’s farmers against the... END_OF_DOCUMENT_TOKEN_TO_BE_REPLACED

Botswana is on track to become the first country in Africa to... END_OF_DOCUMENT_TOKEN_TO_BE_REPLACED