‘Betting on Africa to feed the world.’ It was a bold statement, but one that 2017 World Food Prize laureate Akinwumi Adesina felt confident in making. While delivering the Norman Borlaug Lecture – in effect, an acceptance speech – he explained that ‘Africa sits on 65% of the uncultivated arable land left in the world, so what Africa does with agriculture will determine the future of food in the world. Therefore, more than ever before, we must help Africa to rapidly modernise its agriculture and unlock its full potential’.

Adesina is the current president of the AfDB, and previously served as Nigeria’s Minister of Agriculture and Rural Development. Few people are better placed to assess the present – or future – state of African agriculture. He believes that Africa needs a new agrarian system, one that combines smallholder farmers with their large, commercial counterparts. ‘Large commercial farmers played a huge role in Brazil, while in northern Thailand the transformation was built around small farmers. One common thread in both was the rapid establishment of private sector and public policies that allowed these regions to interact with external markets.

‘Today, Brazil dominates global soya bean production. Thailand dominates global rice and cassava markets. That’s exactly what Africa needs to do.’ It’s little surprise, then, that the focus for Africa’s agritech innovators this year is on expanding to include smaller-scale farmers.

‘Our vision is to get even more involved with them, and to assist them on all levels – not just technology,’ says Erna du Plessis, MD of Renlyn Agritech. ‘The technologies that we’re going to focus on in 2018 are the lower-cost climate-control systems – some of which have won awards for their cost effectiveness, cost competitiveness and user-friendliness. This technology creates an awareness of what’s going on inside the greenhouse, allowing the farmer to see what’s [happening] remotely, via mobile phone or tablet.’

‘You use up to about 60% less water in substrate than you do in soil. Then if you collect, disinfect and reuse the drain water from hydroponics, you’ll save about 30% of your water and fertilisers. In countries like the Netherlands, where Renlyn has technology partners, farmers are legally obliged to use these technologies. They aren’t being used that much in Africa yet, but there is a big saving.’

To that end, she adds, Arysta LifeScience Southern Africa is focusing on biostimulant products – or ‘goodie products’, as she calls them. ‘It’s not that we’re moving away from crop chemicals – because they still bring in the majority of our revenue, and without them there wouldn’t be food to eat. But we are moving in the direction of building up biostimulant products to yield more crops and to make bigger crops, so that farmers get more tonnage per square metre.

‘In line with this, in 2017 we acquired bio-solutions provider Verios, which is purely a biostimulant company.

‘We also offer a concept called Pronutiva, which combines crop protection and bio-stimulants, so that you’re not only protecting your crops but also feeding them the necessary nutrients.’

Like Renlyn, Arysta aims to service both large- and small-scale farmers. ‘We’re looking at everybody,’ says Spangenberg. ‘We have a global stewardship programme, from Brazil to Zambia, where we look at small-scale farmers, training them on the proper, safe use of our chemicals. Africa is a huge untapped market for us. In Kenya, ornamental farming – flowers grown for export – is one market that we’re looking to gain access to, and across West and Central Africa there’s everything from cocoa to coffee.’ Those farmers – whether they’re producing cocoa, coffee or any of the continent’s crops – are increasingly turning to digital technologies to help improve efficiencies and increase their yields. French start-up Airinov, a market leader in agricultural drones, recently teamed with the EU-funded development organisation Technical Centre for Agricultural and Rural Co-operation to equip West and Central African farmers with unmanned aerial vehicles (drones).

Airinov quickly found, though, that its European strategies – focusing on reducing fertiliser use for environmental and cost-saving reasons – don’t really fly in sub-Saharan Africa, where fertiliser usage rates are low and land-related data often non-existent. ‘In Europe, our drones are used for optimisation. But it’s a different story in Africa where the focus has to be on development,’ Hamza Rkha Chaham, Airinov’s head of international affairs told Le Monde Afrique. ‘Our drones will be used to map fields or pinpoint problems with crops. We want to give farmers more flexibility to invest.’

Elsewhere, Nigerian digital agricultural platform Farmcrowdy is disrupting the market through its innovative approach to funding small-scale farming in Africa. Its online platform sources funds from sponsors, whose money is then used to secure land, plant crops and meet the funding needs of boosting food production for small-scale farmers. The company says farm sponsors can expect to see returns after harvest of up to 25% in a three- to nine-month period, depending on what farm type they choose. 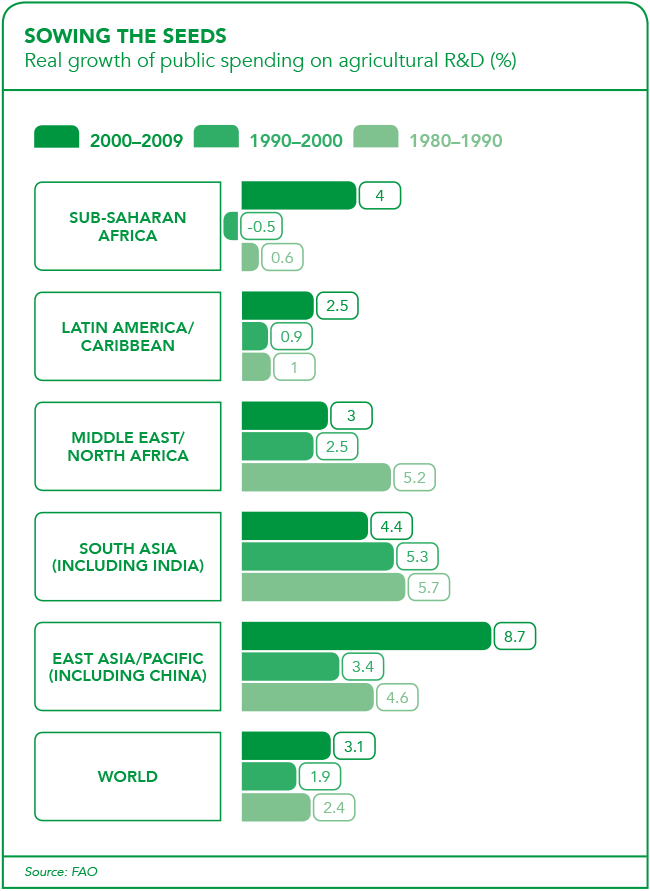 In November 2017, Farmcrowdy launched its first mobile app, providing an accessible, real-time platform for farm sponsors. The app saw close to 5 000 downloads in its first three weeks. ‘In the past month alone, we have witnessed over 500 farm units of poultry – 25 000 chicks – sell out in a few hours to engage farmers who would have found it difficult accessing loans in the banks. So it’s super fast-paced,’ says CEO Onyeka Akumah.

‘People are equally excited about creating impact in the lives of our farmers while earning a decent return. Nigeria is a mobile-first society and we had feedback from our sponsors who said they wanted improved access to our farms. They spoke, we listened, and we have now built a platform that suits Nigerians’ preferred means of doing business – a mobile app.’ Buoyed by that response, the company raised US$1 million in seed funding from a group of international and local investors to help it scale its operations from eight Nigerian states to 20.

As Adesina pointed out in his World Food Prize lecture, ‘there is absolutely no reason for Africa to be a food-importing region. Africa has huge potential in agriculture – but, as Borlaug used to say, nobody eats potential’. Whether through equipment on the ground, chemicals in the soil, drones in the air or mobile apps in the cloud, Africa’s agritech innovators are increasingly demonstrating that they’re up to the challenge.

Ghana has opened its first farmer-owned cocoa fermentation centre. The facility, at... END_OF_DOCUMENT_TOKEN_TO_BE_REPLACED

An initiative supporting efforts to ensure the continuation of education amid the coronavirus... END_OF_DOCUMENT_TOKEN_TO_BE_REPLACED

The Namibian government is rolling out a NAD500 million COVID-19 loan scheme... END_OF_DOCUMENT_TOKEN_TO_BE_REPLACED