Niamey is the last place you’d expect to find a case study for cutting-edge machine-to-machine (M2M) technology. Or maybe it isn’t. The capital of Niger – where maximum monthly temperatures seldom dip below a sweltering 32˚C – struggles with widespread poverty and a punishing climate – which makes it the perfect stage for a smart water metering pilot project. French start-up CityTaps recently installed 1 325 of its water meters around Niamey, enabling locals to pay for their water in advance via mobile phone.

’Today almost 1 billion urban people don’t have running water at home,’ says CityTaps CEO Grégoire Landel. ‘These urban poor pay a triple tax on poverty – time, money and health – because they don’t have running water at home. We have designed a smart prepaid water meter connected to the internet of things [IoT], which makes it possible to prepay for water service at home with any mobile phone. It links urban water operators in Africa, South America and Asia with households without running water at home. The water operator is guaranteed to be paid for providing its service; while subscribers can pay at any time, with any phone and for any amount – and avoid getting a large bill at the end of the month, which is an issue for people with irregular income.’ Landel and his team aim to deploy 10 million CTMeters (supported by the attached CTCloud software) over the next 10 years.

They’re not the only ones pioneering practical M2M technologies in real-world settings. In South Africa alone, the Smart Real Time Hydroponics and Aquaponics Farming System is improving food security in rural areas by sending data from rural farms directly to the farmers, giving them instant insight into which plants are thriving, what nutrients are missing, what the water levels are, and other essential information required for optimum crop yields; while the Domestic Refuse Collection Management System combines vehicle telematics with electronic identification to allow municipalities to track, monitor and locate more than 800 000 domestic refuse bins; and the Smart Chicken Weighing Scale allows farmers to monitor the growth and development of broiler farm chickens throughout their life cycle – without human involvement.

Each of those was shortlisted for the M2M app development competition at the 2019 MTN Business IoT Conference & Awards. ‘These solutions showcase the infinite possibilities that connectivity can provide and its potential transform industries for the better,’ MTN Business head of marketing Kholofelo Magagane said ahead of the event.

IoT and M2M are terms that are often used but seldom really understood. M2M is a fundamental aspect of the broader IoT. It does what it says on the box (allowing two machines to exchange data without human interaction). M2M networks are similar to LAN (local area networks) or WAN (wide area networks) in their linear communication, but M2M is used exclusively to facilitate communication between machines whose sensors collect information and feed it back to other machines in the network. A central, intelligent control unit gathers and assesses the information before issuing appropriate instructions to the appropriate device. 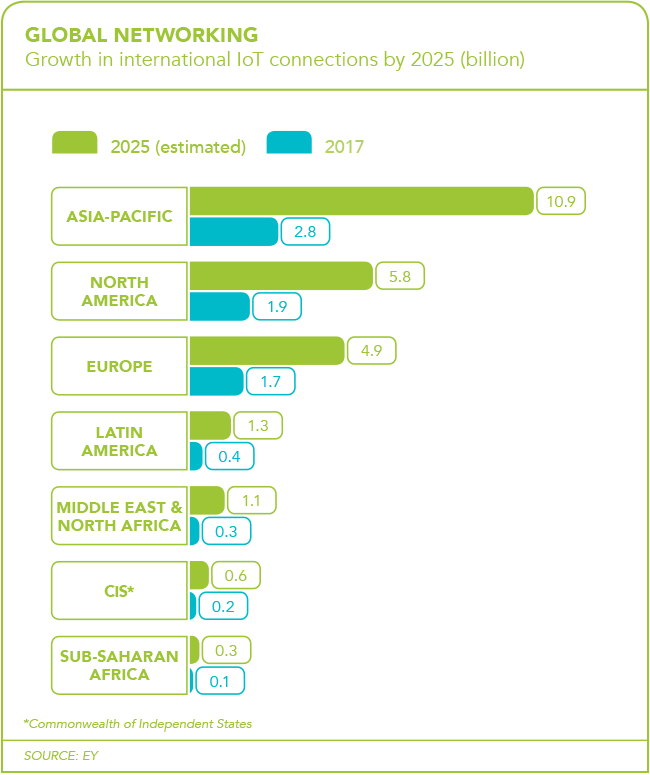 It may sound futuristic but the reality is you’ve often used M2M technology without realising it. Every time you draw cash from an ATM, for example, the machine requests and receives permission to give you money, from another machine, without human intervention or involvement. That same example highlights some of the advantages of M2M technology, including security (the risk or error is reduced by removing the human bank teller); cost reduction through automation (the machine doesn’t earn a salary); continuous, real-time access to data (ATMs are operational all day, every day); scalability (banks can set up as few or as many ATMs as they want to); and so on.

IoT builds on that, taking the M2M framework and expanding it over a much wider context. Now, instead of simply a network of bank ATMs, you have multiple meters, sensors, devices and machines communicating with each other on a full-time, real-time basis.

Roger Hislop, executive head of IoT at Internet Solutions, clarified this in a recent interview with ITWeb, when asked if IoT was having an impact on South African industry yet. ‘If you think of IoT as a natural evolution of machine-to-machine or telematics, then think of it in the same light as having impacted South African businesses for 40 years, and enormously so,’ he says. ‘If you only consider IoT in the sense of the recent technology developments of low-cost devices connected to the hyperscale cloud via low-cost wireless sensor networks, then the impact is not a lot yet. Despite the enormous hype around this technology, most South African companies are still in a wait-and-see state or doing cautious proofs-of-concept.’

There are, of course, a few notable exceptions. South African Breweries (SAB) is already using an IoT solution to track and monitor the temperature and location of its coolers and fridges across the country. The system, supplied by UK company Thingstream, provides real-time data feeds that help SAB plan in an efficient and effective way. ‘Our experience thus far confirms Africa is fully embracing IoT, quicker than many other territories,’ according to Neil Hamilton, Thingstream’s VP of business development.

‘Key industries such as agriculture and mining feed global supply chains,’ he says, adding that these supply chains demand efficiency for the greater good of everyone in terms of carbon reduction, waste reduction, and so on. Hamilton points to the ‘“fail fast” approach to solving business problems using technology’ in countries such as South Africa, adding that the African engineers ‘turn around proof of concepts very quickly, enabling business to make decisions quicker’.

Little wonder, then, that research firm Gartner considers M2M communication a US$1.9 trillion global industry. In Africa, Hamilton points out two top key areas that he believes would accelerate IoT and M2M adoption. ‘The first being for companies to see real examples of how leading enterprises are driving efficiencies or new revenues from embracing IoT; the second that adopting IoT is made easy because there are so many components to a solution.’

But – as the ATM example illustrates – M2M technology is not a new concept. IoT and M2M have existed for many years already, according to Gary Allemann, MD of Master Data Management. ‘What is new and revolutionary is what we are now able to do with the data these technologies generate. From predictive maintenance to consumer behaviour analytics, facial recognition to fraud detection and prevention, there is a wealth of value to be gained.’

Allemann warns, however, that M2M requires a ‘shift in mindset’ to harness its real benefits. Rather than storing the information gathered through M2M communication, and then using it after the fact for retrospective analytics, Allemann argues that businesses need to take the approach of analysing data on the fly and then dumping it.

‘The genuinely revolutionary aspect of IoT and M2M is its ability to generate always-on data,’ he says.

‘The constant and relentless nature of always-on data generation also makes real-time analytics even more important. Much of this data is only relevant now, in the moment, and once it is historical it no longer has worth. It must be analysed immediately and then deleted, otherwise no value can be gained. For example, a machine sending a signal every 30 seconds communicating that its status is good, is important information. However, it does not need to be stored because it is worthless after the signal has been sent. It also only requires action if something changes, which can only be ascertained if this data is being analysed in real-time.’

That holds true for an ATM in an upmarket Nairobi shopping mall, for a beer fridge in a Cape Town bar, and for a water meter in Niamey. Ultimately, IoT offers a vision of complete M2M automation, where machines communicate with each other to make life easier for humans. With every piece of data that’s gathered and put to use, that vision becomes more and more of a reality.

The first transshipment cargo has docked at the new deep-water Port of... END_OF_DOCUMENT_TOKEN_TO_BE_REPLACED

A US$50 million trade-finance facility has been created to help support Africa’s... END_OF_DOCUMENT_TOKEN_TO_BE_REPLACED