South Africa’s automotive sector is a very valuable one. A key pillar of the economy, it contributes 6.8% to the country’s GDP, and is its fifth-largest exporting sector, accounting for close on 14% of total exports. According to the National Association of Automobile Manufacturers of South Africa (NAAMSA), South Africa’s total automotive revenue in 2018 amounted to ZAR503 billion. Of that, more than ZAR178 billion was from the export of vehicles and automotive components; these reaching no fewer than 155 international markets.

‘Several South African vehicle assembly plants and their domestic component manufacturers have received international accolades for the quality of their outputs, clearly demonstrating the capabilities of the industry,’ says Michael Mabasa, CEO of NAAMSA.

Numerous automobile companies, including Mercedes-Benz, BMW, Volkswagen (VW), Toyota, Renault, Nissan and Ford, manufacture vehicles in South Africa, both for local sale and for export. Many of these brands are making significant investments in the country, bolstering production, revenue and employment opportunities.

In mid-2018, Mercedes-Benz announced that it would be producing the next generation of its C-Class model in East London, and that because of this, it would be expanding the plant. The ZAR10 billion investment included the construction of a new paint shop and body shop, an upgrade of the assembly shop and new logistic warehouses.

More recently, in April 2019, Nissan announced a ZAR3 billion investment in its facility in Rosslyn, Pretoria, to prepare the plant for production of the next-generation Nissan Navara. The investment means modernisation of the plant, including a new, flexible production line and additional facilities, as well as training and upskilling of staff.

Production is expected to start in 2020 and will create an estimated 1 200 new jobs at the facility and across the local supply chain.

The Tshwane automotive special economic zone (SEZ), a public-private partnership with national, provincial and local government, and part of the expansion of the OR Tambo SEZ, was officially launched on 5 November 2019. It is expected that this automotive-component supplier industrial park, which will be situated adjacent to Ford’s South African Silverton vehicle assembly plant, will play a significant role in bolstering investment and job creation.

‘The proposal to establish the Tshwane automotive SEZ was initiated by the Ford Motor Company as a means to expand its automotive footprint in South Africa by attracting its global suppliers into the country,’ South Africa’s President Cyril Ramaphosa said at the launch of the SEZ. Ford South Africa will be an anchor tenant of the hub, crowding in new investments and localisation opportunities for component manufacturers.

Neale Hill, MD of Ford Motor Company of Southern Africa, calls the launch of the Tshwane automotive SEZ a ‘milestone achievement’ – one that followed five years of engagement between the company and government. 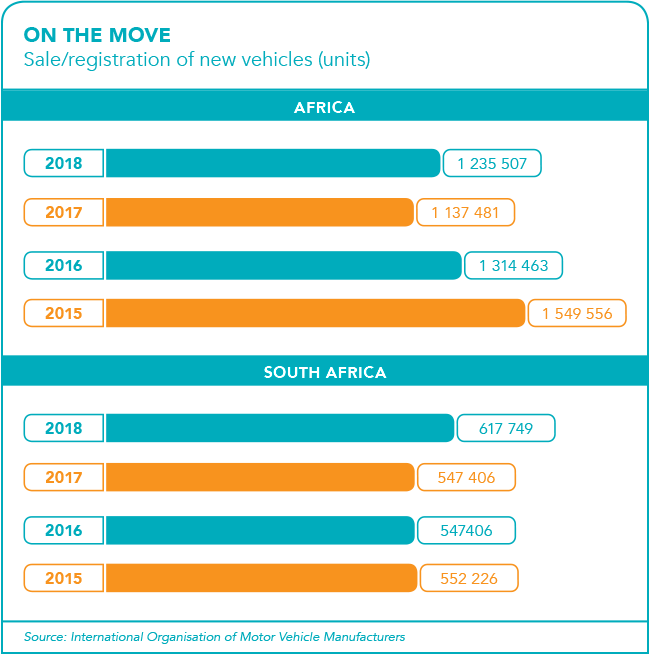 ‘The public-private partnership between all three spheres of government and the private sector is crucial in order to drive growth in the automotive industry. The government’s new region-based model for special economic zones is an important new tool to attract domestic and international investment, which will help businesses to become more competitive on a global scale,’ he says.

Key players in South Africa’s automotive sector are also looking northwards for new opportunities and markets for their products and services. Indeed, the largely untapped potential of Africa’s automotive industry presents plentiful room for growth across the value chain – from vehicle production and assembly to sales and after-sales service.

Research by consulting firm Deloitte shows that the continent’s automotive market is still quite small, with a much lower motorisation rate than other countries – 44 vehicles per 1 000 inhabitants, versus a global average of 180 per 1 000 – according to 2018 figures. A Mordor Intelligence report notes that Africa’s automobile market is the most underdeveloped in the world, largely because of low average income, the lack of a sizeable middle-class, and high lending rates.

That said, the African market has impressive growth prospects. Across the continent, companies are making considerable investments, setting up manufacturing and assembly plants and presenting assorted service offerings. Some of the companies that are most active include Toyota, Nissan, Honda, Volkswagen and Renault.

VW’s primary exposure on the continent has always been in South Africa. Volkswagen Group South Africa (VWSA) currently produces 162 000 vehicles and 100 000 engines per year – some for domestic use and some for export. Two years ago, VWSA opened an operation in Kenya, starting small, with the assembly of 5 000 vehicles. Thomas Schaefer, chairman and MD of VWSA, says the company is awaiting the Kenyan government’s launch of a new automotive policy but once this happens, they expect good growth.

A little more than a year ago, VWSA opened a Rwandan assembly facility, also launching its mobility services and car sharing. ‘Rwanda was an amazing learning curve for us, especially in the mobility field,’ says Schaefer. ‘We had to deal with a lot of technology and get everything running, such as the payment function, and there was data and marketing. But it’s growing day by day and month to month, and the take-up of services is great. That’s really encouraging.’

As for VWSA’s business in Nigeria, that’s been difficult, says Schaefer, and it has been dormant for a while, largely because the automotive policy has not yet been signed by the president. VWSA’s next African project, an assembly facility, launches in Ghana during the first quarter of 2020. A similar Ethiopian endeavour is still in the project phase, with intensive discussions still taking place between the company and government. But, says Schaefer, there is lots of excitement about it.

Groupe PSA, which includes brands such as Peugeot, Citroën and Opel, recently started production at its Kenitra plant in Morocco. The plant will have a production capacity of 200 000 vehicles from mid-2020, serving customers in 80 markets. Peugeot already assembles around 1 000 vehicles across several models at its Kenya Vehicle Manufacturers (KVM) assembly plant in Thika. Groupe PSA anticipates that when the KVM plant is fully operational, it will assemble at least 15 000 vehicles annually for local and regional markets.

Mercedes-Benz signed an agreement in mid-2019 to resume its automotive assembly in Egypt, after a four-year-long hiatus. The carmaker will set up its plant in the Suez Canal Economic Zone and undertake assembly together with a local partner. It has not yet been said how many cars might be produced or what value the investment will be. Mercedes-Benz is also in talks with the Egyptian government regarding mobility concepts, electro-mobility and electric cars, as well as autonomous driving, though detailed agreements have yet to be finalised.

In 2019, Toyota Motor Corporation and Côte d’Ivoire signed an agreement regarding the building of a vehicle-assembly plant in this West African country. As part of its move into Africa, Toyota Tsusho acquired French automobile retailer CFAO (which operates in 35 African countries) in 2016.

Another company trying to expand its African footprint is Mahindra & Mahindra (M&M), which is looking to set up contract manufacturing units in Kenya and Sudan, as well as to export fully built units out of South Africa to countries such as Mozambique, Zambia and Tunisia.

While Schaefer is optimistic about Africa’s potential, he feels there needs to be a lot more regional collaboration. ‘Each country by itself will have difficulties scaling production and making it efficient in the long run,’ he says. ‘The key is regional automotive collaboration.’ For example, Kenya could produce passenger cars, Uganda could do vehicle tracking devices, Rwanda could do motorbikes or software, he explains.

‘We have been working on this intensively for a while now and we have buy-in. We need to get the basics right with specific countries and then scale it, so that each investment makes sense,’ he says. ‘It’s the necessary first step to successful intra-continental free trade in Africa.’

Asked what he thinks the continent most needs to attract greater investment from automotive brands, Schaefer says demand. ‘There’s literally no uptake of new vehicles, so what Africa needs is a boost to create local demand. This can be done by offering finance options, so that buyers don’t have to pay cash upfront. Looking at Africa, Nigeria has the greatest automotive opportunities, but demand is a problem. If you unlock the potential, Nigeria is good for 2 million cars per year,’ he says. ‘We must make the continent a more conducive environment for investment. Once we unlock this potential, investment will flow in. I believe the business environment is ripe for investment. The potential is there for Africa but we need to get together. It takes industrial bravery together with political will and a good plan, and then you can move mountains.’

Côte d’Ivoire has become the second country to take delivery of COVID-19... END_OF_DOCUMENT_TOKEN_TO_BE_REPLACED

Nigeria is set to commence work this quarter on a complete overhaul... END_OF_DOCUMENT_TOKEN_TO_BE_REPLACED

Burundi and Rwanda are going ahead with plans to build a multi-purpose... END_OF_DOCUMENT_TOKEN_TO_BE_REPLACED