There was a lot on the agenda at the first-ever Russia-Africa summit, held in the Olympic city of Sochi in late October. Amid the flurry of trade deals, MoUs and co-operation agreements, there was talk of money (Russia reminded all comers of Africa’s US$20 billion Soviet-era debt write-off ), of guns (Russia’s state arms exporter sent US$4 billion worth of weapons to African countries in 2019), of power (Russian parastatal Rosatom revealed plans to build a nuclear power station in Ethiopia)… And of robots.

During a panel discussion, Igor Bogachev, chairman of the subcommittee on digital economy of the Russian Union of Industrialists and Entrepreneurs, noted that: ‘As in Russia, extractive industries form the basis of the economy in Africa. Thirty percent of the world’s mineral reserves are located on this continent. According to government data, in South Africa alone, mining contributes eight out of every ZAR100 to the overall economy, and accounts for one out of every 40 jobs.’

Bogachev led a discussion on opportunities for Russia to supply industrial robots, dump trucks and bulldozers to Africa’s mining industry, pointing out that traditional mining methods are becoming increasingly costly, even as productivity declines.

‘It is important to consider the harsh climates in which these enterprises are located, the growing health and safety requirements, and the challenges of hiring highly qualified personnel,’ said Bogachev. ‘Without automation and robotics, it would be impossible to solve these problems.’

Pavel Rastopshin, MD of Russian robotic supplier ZYFRA, added: ‘The use of robotic technology is 20% higher compared to conventional machinery. Thanks to such technology, the driver of a dump truck can transition into a control-centre operator, overseeing the use of several vehicles at once. This autumn, our robots were put to use in the SUEK quarry in Khakassia [Siberia] and Morocco. Our next destination for this technology is South Africa.’

Automated mining technology has, of course, been in Africa for some time already. The technology is best applied in greenfield projects, which is why Barrick Gold Corporation’s Kibali gold mine in the DRC serves as one of the go-to case studies for its possibilities on the continent. Already one of the largest gold mines in the world, the mine was designed for automated mining and allows manned and unmanned operations within the same area. Kibali’s underground operations are based on Sandvik’s Automine Multi-Fleet system, which is supervised on the surface by a single operator. The system enables a fleet of up to five load-haul-dump (LHD) loaders to be operated autonomously, at depths of 750m below the surface, all within the same 6 m2 production drive. According to Tyler McKenzie, automation project manager in Kibali’s underground mine department, they had seen significant reduction in their operation costs compared to conventional operation since implementing the system. ‘In 12 months, our three main autonomous LHDs have averaged 4 500 running hours and moved over 1 megaton each. The reliability of the system and the machines is higher than we even hoped for.’ 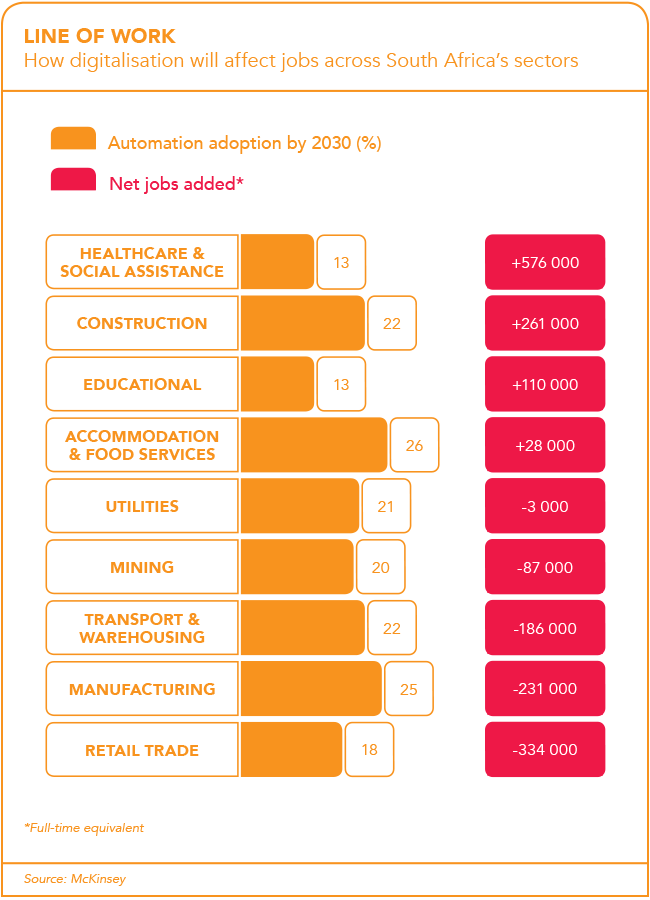 In Chile, Codelco’s El Teniente (the world’s biggest underground copper mine) also uses the Automine system, primarily for its safety aspect. ‘As a state-owned mining company, it is our responsibility to implement technology and solutions that ensure the safety of our people and the sustainability of our mines,’ according to El Teniente’s chief engineer for automation and technology, Rafael Guzman. ‘Being a good corporate citizen is not negotiable. It is critical to our success.’

Safety is one of the primary drivers of mechanisation and automation in Africa’s mines. Speaking from the Sibanye-Stillwater Digital Mining Laboratory (DigiMine) at South Africa’s Wits University, Fred Cawood confirms that it’s the common denominator in the suite of new technologies that his team is working on at the Wits DigiMine. ‘All the systems that we have installed have one thing in common, and that is to manage risk and to make mining safer,’ he says. According to Cawood, the idea is to get mine workers away from danger and to install systems and machines to enable safety.

‘It’s not easy to achieve that, so it’s not yet happening on a grand scale,’ he says. ‘But it’s certainly the long-term trend, to have fewer people in the mine and more people on top of the mine so that they can look at the data that is being gathered.’

That is why a key area of the DigiMine’s work lies in integrating the various digital systems that are emerging across the industry. ‘Currently these systems are installed in silos, but for effective management you want to pull the data from all those different sensors together,’ says Cawood.

‘That’s our big project at the moment: allowing integration of the data into one, big database. It’s better to make decisions from that, rather than taking an isolated reading from one specific sensor that measures, say, temperature. If you add temperature to, for example, air velocity and gas concentration, then you get other kinds of information.

‘For example, it may be acceptable to work in 30˚C temperatures, but 30˚C without airflow and the presence of some gases is an unacceptable environment.’

A 2019 Deloitte report takes this a step further, highlighting the broader challenges that come from what it calls mining’s ‘haphazard’ digitalisation. ‘Unlike industries such as manufacturing and automotive, the mining sector still lags in its efforts to digitise the supply chain,’ the report states. ‘Despite the challenges associated with accessing critical materials and equipment, particularly in remote locations, mining companies rarely approach their mine site planning, asset maintenance, and materials processing and transport in an integrated fashion.’

The report notes that while many mining companies have begun digitalising discrete pieces of equipment – trucks, trains, LHDs and so on – they have not extended these efforts across the entire supply chain, from pit to port.

‘As a result, the data they generate from the technology they have installed exists in a vacuum – hampering their capacity to generate true insights that could otherwise enable them to reduce inventory costs through just-in-time procurement, enhance asset utilisation rates, and improve their production outcomes by making their EPC (engineering, procurement, construction) relations more dynamic and responsive.’

Kevin Xu, mining and metals leader at Deloitte China, says in the report that the sector is now at the earliest stages of building a digital supply network. This, he points out, is both a risk and an opportunity. ‘Those organisations that crack the code around fully interlinking their supply chains can do more than break down operational silos. They can also gain the end-to-end visibility they need to enhance their asset utilisation, operational efficiency and productivity – realising hard dollar savings as a result.’

Wits University’s Cawood points to a handful of African mines that are already relatively advanced when it comes to automation, including Kibali; Syama gold mine in Mali; Finsch diamond mine in South Africa’s Northern Cape; De Beers’ Venetia mine in Limpopo; and Gold Fields’ South Deep mine in Gauteng.

‘For the more difficult environments, you still need line of sight when controlling machines,’ he says. ‘You still need to see the machine. It can be remotely controlled but you need to be close to it – and that is where the problem of putting distance between workers and risk comes in. You identify the highest risk areas in the mine, and then ask: “How far can we get our people from that risk?” Sometimes it’s 5m away, sometimes it’s more; eventually it will be the top of the mine.’

And with every new technology that is integrated into the overall systems, Africa’s miners take another step away from danger and towards safety.