The rainy runways of Amsterdam Airport Schiphol are a long, long way from the sunny flower farms of Kenya’s Lake Naivasha. Yet it’s here in the Netherlands, at one of Europe’s busiest airports, that the Royal FloraHolland Aalsmeer Flower Auction and KLM Cargo created the Holland Flower Alliance (HFA) in 2016, sowing the seeds for a vital part of Africa’s floral export value chain.

The HFA ended 2019 with the completion of a digital platform to improve the visibility and flow of shipment data along that chain. Roos Bakker, Schiphol’s director of business development, says that while digitalisation is an increasingly important aspect of the overall freight logistics picture, ‘if we want to keep cargo, we must also continue to pay attention to the airport’s customers. We have to be careful that the customers do not become a neglected child’.

It might seem a strange comment on the surface, yet Bakker’s meaning is clear: the global cargo industry is, ultimately, about moving things from one place – and one person – to another.

That’s why, at the 2018 Flower Logistics Africa conference held in Nairobi, Kenya Flower Council CEO Clement Tulezi made a point of saying: ‘As we look at our business strategy in the next five years, the place of logistics has become more important in our industry. Without innovation in cold chain, this industry cannot move ahead. It is not just what kind of quality or how much quantity we sell from this country. Lots of growers consult us to grow their business. We are keen on cold chain as we believe in delivering the product as fresh as they are.’

Speaking at the same conference Eric Gysen, cargo sales manager at Belgium’s Liege Airport, spoke about the cloud-based Nallian platform. ‘We are even considering an option to track temperature for the perishables at the airport itself,’ he said. ‘We are adding different applications on our platform to have an alert, if goods are lying on airside for too long.’

The 2019 Flower Logistics Africa conference picked up on the same theme, with Jacob Bwana, cargo commercial manager at Kenya Airports Authority, again pressing the need for digitalisation along the value chain. ‘This is what enhances data sharing and visibility of the processes, and this is what creates reliability and gives value proposition for the air-freight business,’ he said.

But while digitalisation serves as a useful tool to track deliveries, its greatest utility comes in maintaining the cold chain. In the world of delicate and perishable freight cargo, the cold chain is sacrosanct, as it keeps fruit, flowers, meat and medicines fresh for longer, preventing waste and spoilage.

By some estimates, nearly a third of what Africa’s farmers grow for export is lost due to lack of refrigeration, poor market access and other related factors. The annual food losses for fruit and vegetables are estimated to be as much as 50%.

Compounding that problem, the air-freight industry has just come out of what International Air Transport Association (IATA) director-general Alexandre de Juniac called ‘a very tough year’. Globally, cargo traffic recorded a 3.3% annual decline in demand in 2019 – the first time it had turned negative since 2012. African carriers were especially hard hit, with the IATA citing high costs (in large part due to government taxes and fees) and low load factors. ‘Economic growth in the region has been relatively good and is expected to rise in 2020,’ the IATA notes. ‘But markets are extremely fragmented and inefficiently served in the absence, so far, of a single African air-transport market. As a result, they are projected to show a loss of US$200 million [in 2020], similar to 2019.’

Against this backdrop, the cold-chain system remains weak in some sub-Saharan African countries. It’s also nine times more expensive than anywhere else in the world, by some estimates. Kenya and Ethiopia are among the leaders when it comes to cold-chain technology in Africa, with the industry being driven by those lucrative fresh-cut flower exports to markets in the EU.

The Kenya Aviation Authority (KAA) recently confirmed that it is working to attract cargo airlines to local airports, with Eldoret International Airport alone able to handle more than 60 000 tons of cargo annually. Airlines operating out of the airport, near the Ugandan border, include Ethiopian Airlines, Fly Emirates, Jambo Jet, Sax and Skyward Express.

‘Eldoret Airport has recorded significant growth in cargo carriers due to its position and also the availability of horticulture, which has remained our major export in the country,’ KAA’s acting MD Alex Gitari told Business Daily. ‘We are working with COMESA [Common Market for Eastern and Southern Africa] to link airlines that export Kenyan products to return with different merchandise to make routes more profitable.’

Elsewhere, Ethiopian Cargo and Logistics Services announced in June 2019 that it had connected Chongqing, the largest municipality in southwest China, with Africa and South America through a new weekly cargo flight. A large, B777-200F freighter will operate on the key route that links four continents and more than 3 billion people through Shanghai, Chongqing, Delhi, Addis Ababa, Lagos, São Paulo, Quito and Miami.

‘We’re excited to have launched a freighter service to Chongqing, southwest China,’ says Ethiopian Airlines group CEO Tewolde GebreMariam. ‘We are among the veteran carriers that started serving the People’s Republic of China back in the early 1970s, a long-standing and multifaceted tie that has translated into a flourishing trade and investment, cultural and bilateral co-operation between Africa and China. Our new cargo service augments the development of China-Africa bilateral trade and expands on China’s already growing “Belt and Road” initiative, while supporting our strategic initiatives to expand our global cargo operations.’

Acting as a node on that vital trade route requires state-of-the-art technological support and infrastructure. To that end, Addis Ababa Bole International Airport now boasts a US$150 million cargo terminal, which enables Ethiopian Airlines to handle 450 000 tons per annum of perishable products based on their temperature requirements.

In September 2019 the airline confirmed that it was scaling up its joint venture with DHL Global Forwarding. ‘As the government targets […] 11% GDP growth annually under its growth plan, Ethiopia’s focus on export-led industrialisation in sectors like energy, transport and manufacturing, and the expansion of physical infrastructure, will see its industrial sector expand by 20%,’ says Pramod Bagalwadi, CEO of DHL Global Forwarding. ‘In order for Ethiopian businesses to seize this opportunity and expand globally, they need fast, reliable logistics connectivity to overseas markets, backed by industry expertise and high-quality transport infrastructure.’ 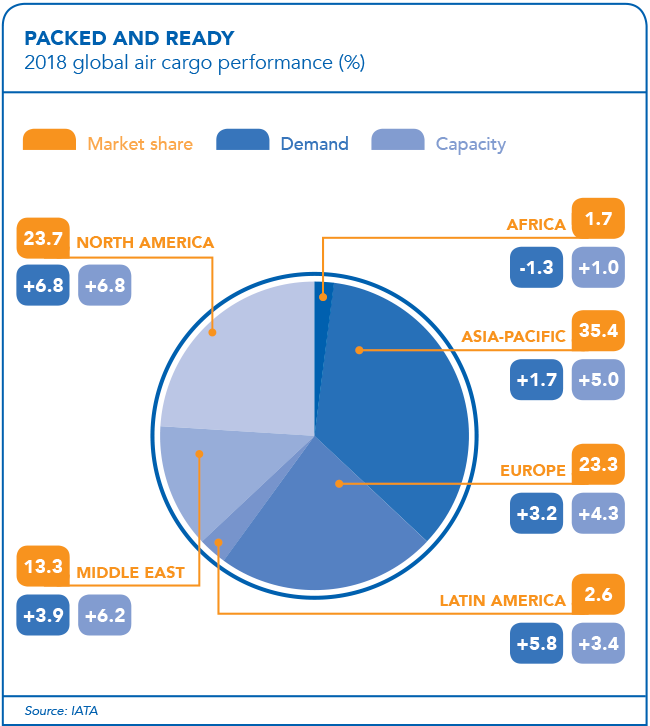 What many laypeople may not realise is just how delicate perishable goods are, and how complex cold-chain management can be.

‘Tree-ripened fruit can’t be transported via the oceans. It would take too long. It has to be flown,’ says René Baan, commercial manager of fresh produce at air-freight agent IPHandlers, which operates out of the 6 000 m² Amsterdam Perishable Centre logistics hub near Schiphol. Because not all products can be optimally stored at the same temperatures, the centre offers four different temperatures within the same building.

As Baan explains, mangoes and pineapples do best at about 13˚C, while soft fruit does better at about 3˚C. But the temperature of fruit and vegetables rises by 1˚C for every hour they’re in the air in transit. Vacuum coolers allow products to be cooled back down to a core temperature of 3˚C within 25 minutes, but that doesn’t work on all fresh produce.

‘That’s why we’ve become really devoted to conditioning,’ says Baan. ‘Cooling really is our added value. It can increase shelf life by at least three days.’

But cargo innovations need not be high-tech, digital solutions. After years of working with a wide range of different box sizes (there are still more than 200 in use), the Holland Flower Alliance developed a standardised box size for transporting cut flowers. Now, instead of flying with empty spaces due to boxes not being stacked and packed efficiently, flower importers and exporters can pack up to 15% more weight on a single pallet.

In an industry where every single kilogram and each cubed metre counts, it seemed an obvious – but much-needed – solution. Proof, too, that the space is ripe for innovative thinking.

Côte d’Ivoire has become the second country to take delivery of COVID-19... END_OF_DOCUMENT_TOKEN_TO_BE_REPLACED

Nigeria is set to commence work this quarter on a complete overhaul... END_OF_DOCUMENT_TOKEN_TO_BE_REPLACED

Burundi and Rwanda are going ahead with plans to build a multi-purpose... END_OF_DOCUMENT_TOKEN_TO_BE_REPLACED