How does a satellite manage to cause a country’s currency to fluctuate wildly in one day? The answer: the satellite is called Zuma. In early January a rocket blasted off from the US. It would seem (online speculation and rumour aside) that the Falcon 9 rocket – owned and operated by South African-born Elon Musk’s SpaceX – was carrying a top-secret US military satellite.

Details are still sketchy but what is known so far is that the mission was not followed into orbit by the company’s livestream, as SpaceX commercial launches are, so there is no evidence in the public domain. But it was speculated that the satellite malfunctioned as it was being deployed, and either fell back into the atmosphere and burned up or disintegrated in space. Or maybe, some said, the malfunction story was just a cover and Zuma sped away safely to carry out its secret mission without any prying eyes following it … Either way, it affected Africa.

Firstly, a US congressional aide posted online that ‘Zuma is lost’. That was picked up by some news agencies who reported ‘Zuma has resigned’. They thought (of course) the post was about Jacob Zuma, then president of South Africa. As media reports put it: ‘Since Zuma isn’t much loved by investors, the rand shot up on speculation that a new government led by the leader of the ruling African National Congress, Cyril Ramaphosa, was on the way in.’ When the reports were sorted out later the day the rand settled down again.

So the report was wrong, although Zuma – Jacob – did end up resigning on February 14. And the satellite? It really was lost.

‘Fake’ satellite news aside, 5 April saw the deployment of HYLAS 4 from the Guiana Space Centre in Kourou, French Guiana. The satellite will deliver ‘up to 28 GHz of capacity through 66 fixed Ka-band beams positioned over Africa and Europe’, according to its owners, Avanti. Ka-band satellites deliver higher-speed data services compared to Ku-band capacity.

‘Additionally, four steerable Ka-band beams – each with two channels – can direct supplementary coverage where it is needed within the satellite’s footprint, potentially allowing an expansion of services into markets in Latin America or Africa.’ Avanti adds that HYLAS 4 will double the company’s total capacity and expand services to 36 countries.

This Avanti Ka-band satellite will provide high speed and reliable satellite broadband services for a range of applications for the private and public sectors, and utilise cellular backhaul for 2G, 3G and 4G mobile networks.

HYLAS 4 will enhance Avanti’s Every Community Online (ECO) initiative in Africa. ECO has been running since 2016 and – in collaboration with other partners – provides WiFi hotspots in schools, communities and government outlets, especially in rural areas.

At the end of March it was announced that the MDXI data centre, a subsidiary of MainOne, is partnering with Avanti to host and manage its Gateway Earth Station (GES) in Nigeria. ‘The partnership has already delivered the commissioning of Avanti’s first GES in West Africa, hosted at MDXI’s satellite farm in Lagos,’ the company said in a press statement. ‘The project, which has seen Avanti invest up to US$20 million in the Nigerian gateway, will ensure data from the HYLAS 4 satellite is delivered efficiently in-country and interconnected with other networks.’

According to MDXI GM, Gbenga Adegbiji: ‘Working closely with Avanti, our engineers have already implemented a bespoke colocation solution to support the largest Gateway Earth Station in the region with uninterrupted power, connectivity and security to ensure 24/7/365 operations. While ineffective distribution of available bandwidth inland continues to hinder Nigeria’s broadband targets, our partnership with Avanti provides Nigeria the opportunity to make accelerated broadband expansion possible via satellite, to overcome last-mile gaps experienced in fibre infrastructure, and enable attainment of the 30% broadband penetration target in the National Broadband Plan.’

Also in January, Yahsat’s Al Yah 3 satellite took off on an Ariane rocket, also from Kourou, French Guiana. The satellite – the third in the Abu Dhabi-headquartered company’s fleet – is also a Ka-band satellite that will expand Yahsat’s coverage into Brazil and an additional 19 markets in Africa. The company says the satellite’s footprint will cover 60% of Africa’s population.

However, this launch also experienced a hiccup, although not as dramatic as Zuma’s. The rocket, also carrying a satellite for Luxembourg-based company SES, was programmed incorrectly (in technical terms ‘two inertial reference systems were misaligned’, according to the inquiry) and it deposited the two satellites in a completely different orbit. 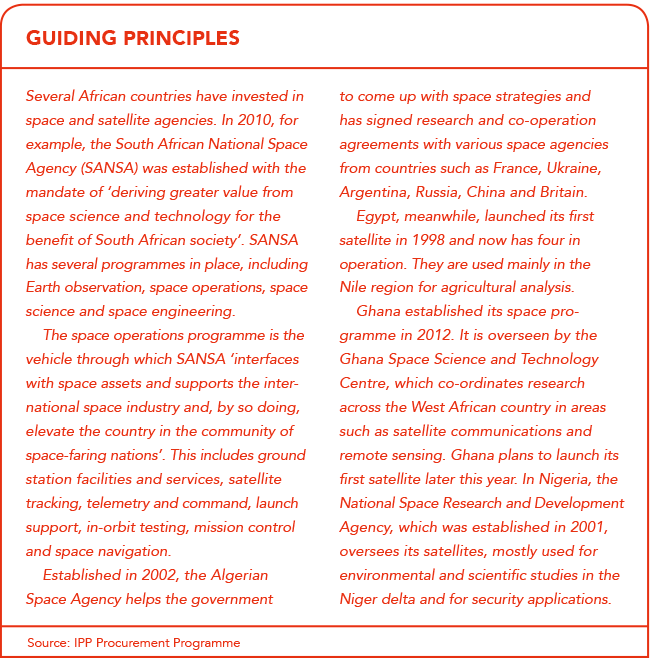 Both satellites will now have to work their way back to the planned orbits 35 800 km directly over the equator and in doing so will consume more fuel than planned, but will be in commercial service later this year.

Al Yah 3 is the first in a new generation of high-power, bigger telecoms satellites built by US aerospace company Orbital ATK.

Meanwhile Nigeria agreed to buy two Chinese communications satellites. Minister of Communications Adebayo Shittu told the media that China Exim Bank and the satellite manufacturer, China Great Wall, ‘have agreed to pay for the new satellites after Nigeria renegotiated an earlier deal that had required it to cover 15% of the cost’.

According to Shittu: ‘This is a very big business opportunity, which is why they have agreed that even without our ability to contribute 15% they are prepared to pay the entire sum of US$550 million for the procurement of the two new satellites for Nigeria.’

Shittu added that the funding was not a loan but the Chinese company will take an equity stake in Nigcomsat, a firm owned by the Nigerian federal government that is responsible for managing the country’s satellite communications. Production of the satellites will take about two years.

The minister also said that the Chinese would also assist with marketing Nigeria’s satellite communication services to other African countries. ‘The first thing is that we want to make a profit. We want to capture the local market and we also want to capture the African market.’

Ghana has opened its first farmer-owned cocoa fermentation centre. The facility, at... END_OF_DOCUMENT_TOKEN_TO_BE_REPLACED

An initiative supporting efforts to ensure the continuation of education amid the coronavirus... END_OF_DOCUMENT_TOKEN_TO_BE_REPLACED

The Namibian government is rolling out a NAD500 million COVID-19 loan scheme... END_OF_DOCUMENT_TOKEN_TO_BE_REPLACED