A decade ago, the International Telecommunications Union (ITU) resolved to spur on a broadcasting revolution by requiring Region 1 countries to transition from analogue to digital broadcasting. The benefits of migration are numerous, from freeing up spectrum for improved and innovative digital services, to paving the way for thriving local-content economies.

However, in the interim decade, sub-Saharan Africa as a region has stumbled along the path to digital migration, with the majority of the continent missing the ITU’s 2015 deadline. There have been success stories, but many African countries still have hurdles to overcome if they are to achieve the digital transition and unlock the dividends of the digital revolution.

Among the 44 countries in sub-Saharan Africa, only seven have thus far managed to transition to digital TV. These are Rwanda, Tanzania, Malawi, Mauritius, Kenya, Namibia and Uganda.

However, substantial progress is happening continent-wide, and the ITU expects a number of countries to achieve digital migration in the near future. For example, says the union, Senegal was expected to have completed the process by the end of December 2016.

A number of other countries are also scheduled to complete the transition over the course of 2017, including Nigeria, Ghana, Zambia, Kenya, Cape Verde, Benin, Togo, Burkina Faso, Zambia and Botswana.

‘Policies are now in place. Most countries have told the ITU of their estimated dates for adopting digital TV. In general, by 2020, the deadline for switch-over will be achieved in African countries,’ says Jean-Jacques Massima, ITU representative for Central Africa and Madagascar.

This positive outlook is shared by Ovum senior research analyst Thecla Mbongue, although she feels migration across Africa will take slightly longer – giving a 2021 projected completion date for the sub-Saharan region. At which point, Mbongue says, the expected migration rate will be around 97%. Currently, as of the end of 2016, Ovum places the region’s migration rate at approximately 60% of almost 60 million TV-owning households – with more than 20 million households still accessing via analogue signal.

Over the next five years, the research firm predicts the number of households owning a set to grow exponentially to approximately 110 million by 2021, and in tandem with this, the amount of analogue TVs in use will diminish. Ovum expects the biggest leap in the number of digital television households to occur across 2019 and 2020.

According to Massima, looking at the early achievers of digital migration, Tanzania’s digital migration process stands out as a particular success on the continent, with the country having taken a phased approach to the transition, which concluded in 2015. ‘The key factor that made it work was that all the key private and public sector stakeholders and actors agreed on a common framework to work from,’ he says.

Indeed, Tanzania’s approach was to set out a 10-year roadmap guiding the digital migration process, beginning with a consultation period which began back in 2005. By 2006, the country had moved on to laying down and modifying the regulatory and legislative framework for the transition, setting the scene for a decidedly policy-driven migration.

On 31 December 2012, Tanzania became the first country in sub-Saharan Africa to begin analogue switch-off, and had completed the transition by 2015. Following the successful migration, the Tanzania Communications Regulatory Authority (TCRA) was asked to present its learnings from the transition process, and the authority put the success down to largely policy and communication factors. 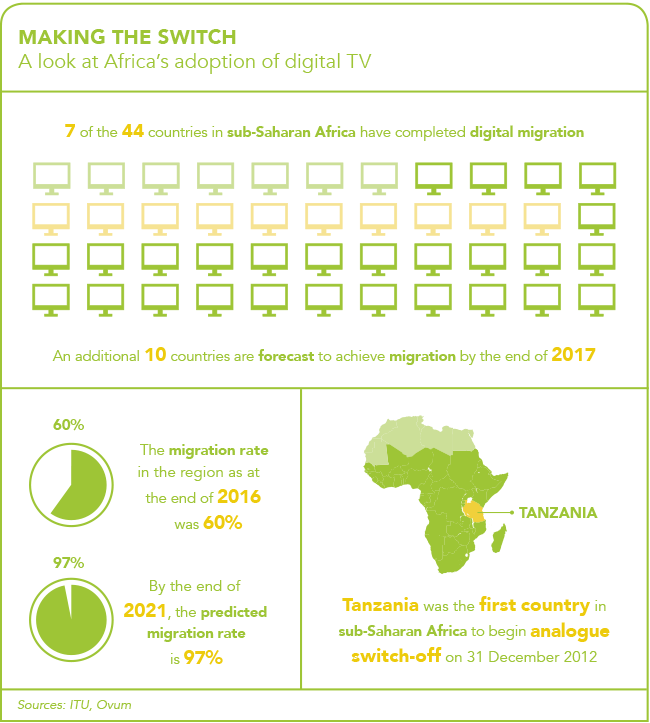 First, the TCRA pointed to the firm plan put in place early on in the process. However, the authority also highlighted that the framework was driven by consultation and communication – with stakeholders and actors but also with the population.

Engaging with the population, across cities through to rural villages, was also a key factor in achieving the transition smoothly, the TCRA said. This necessitated the visible participation of public figures, right up to the President, to make this engagement effective.

An awareness campaign was rolled out across all types of media channels, and the President of Tanzania involved himself heavily in a public awareness campaign complete with Digital Tanzania branding. ‘Communication is power. One of the key success factors was to identify and categorise the audience profile for effective outreach,’ the TCRA said.

There are a number of challenges to rolling out digital TV in sub-Saharan Africa, delaying the process in many of the region’s countries. According to Massima, resource mobilisation and technical hindrances are the most commonly cited challenges.

This is mirrored by the lessons learned in Tanzania, with the TCRA listing resource management as a significant burden. The resource hurdle falls into two categories, the TCRA said. First, in the phase of simultaneous broadcasting of analogue and digital signal prior to analogue switch-off, the resources needed are substantial.

The other category presents itself in the transmission fees charged by multiplex operators to content service providers, which also presented a resource challenge – with the multiplexes hiking fees to onerous levels. In Tanzania, the authority was forced to intervene and regulate. Looking at the technical challenges, again, multi-stakeholder engagement is needed to overcome the hurdles rendered.

According to Caroline Creasy, general manager of corporate affairs for Africa at MultiChoice Africa – which operates in 50 African markets – it is part of the role of broadcasters to assist local governments in navigating the technical challenges of digital migration. ‘Operations in Africa are complex and we are dealing with 50 different countries all with their own legal systems, tax systems, and broadcasting policies.

‘In each country they are at different points in the digital migration process and we work in close co-operation with governments to support them in the technology and communication requirements of a digital migration,’ says Creasy.

Meanwhile, as Africa progresses on its digital journey, attention also needs to turn to the creation of quality content. The migration to digital could serve to spur local creative industries, but there needs to be innovation in approaches to the types of content in demand on the new platform, says Bitange Ndemo, former permanent secretary of Kenya’s Ministry of Information and Communication – a position he served in for eight years from 2005 to 2013, covering much of the transition process.

According to Ndemo, the fact that Kenya’s broadcasters were ‘coerced’ into transitioning has resulted in less attention being turned to creating new types of content – a situation that needs to change.

‘Kenyan broadcasters were coerced into switching. They are still in the analogue mentality, as new nimble entrants come in with quality content. They need to accept that the digital platform is different, and they need to be in virtually every digital platform,’ says Ndemo.

Broadcasters should also concentrate on responding to the preferences of Africa’s young populations to access content via mobile, and the trend towards real-time short and sharp access to content. Ndemo adds that ‘young people – who are more than 60% of the African population – have a short attention span and rarely watch traditional news. They like quick summaries, and mostly on the mobile platform’.

The first transshipment cargo has docked at the new deep-water Port of... END_OF_DOCUMENT_TOKEN_TO_BE_REPLACED

A US$50 million trade-finance facility has been created to help support Africa’s... END_OF_DOCUMENT_TOKEN_TO_BE_REPLACED