If transport is the heartbeat of the economy, then logistics companies are the oxygen that pumps through a nation’s arteries, supplying and revitalising even the most remote parts with economic life. Road, rail, air and sea logistics competencies and levels of global connectivity can serve as a differentiator that drives economic growth. Good logistics means money in the bank.

‘Countries at the same level of per capita income with the best logistics performance experience additional growth of 1% in gross domestic product and 2% in trade,’ according to the 2010 World Bank Logistics Performance Index (LPI), which measures the efficiency of international supply chains.

Africa is home to a number of major logistics and supply chain mobility companies that run their regional and even global operations from their local headquarters – almost exclusively located in SA – such as Barloworld Logistics, Super Group, Imperial Logistics, Grindrod, Unitrans and Bidvest. They’re facing tough competition from multinationals moving goods across, in and out of the continent, like, for instance, German-headquartered DHL and DB Schenker, French group Bolloré, the Dutch CEVA, Switzerland’s Panalpina, the US’ FedEx, Japan’s Kintetsu World Express and Danish container shipping line Maersk, to name but a few.

The barrier to entry is set very high at the top end of the freight forwarding and logistics market because it requires an international network, big capital investment and specialised skills. Recent years have seen some large, strategic consolidations, such as the acquisition of UTi Worldwide by Danish firm DSV, which was the sixth-largest logistics group globally in 2014.

UTi is a big player in Africa, having been founded in Johannesburg in 1976 and later listed on the Nasdaq as UTi Worldwide and headquartered in California. The company employed 21 000 people in 58 countries but had struggled with job cuts and profit warnings when the $1.35 billion takeover was announced in October 2015.

At the time, UTi board chairman Roger MacFarlane said: ‘We are operating in an industry where, increasingly, scale is critical. Joining forces with DSV delivers substantially greater client value and many future opportunities for our people, while it is financially very attractive for our shareholders.’

The acquisition will enable the Danish company – now the world’s fourth-largest freight forwarder, according to Bloomberg – to expand its geographic footprint and range of services, especially in its air and sea division.

Meanwhile the bottom end of the transport logistics market has low barriers to entry and is over-supplied, as anybody with a pickup or motorbike can start their own business. The focus on ‘last-mile’ delivery (the last leg in the transport of goods to the customer) has seen the emergence of app-based e-courier startups, such as ACE (Africa Courier Express) in Nigeria, WumDrop in SA and Sendy in Kenya. Forbes refers to this as the ‘uberisation’ of last-mile freight, alluding to taxi-industry disrupter Uber.

Global market research and consulting firm Frost & Sullivan found that instant and sameday delivery solutions have become key service differentiators. Its Future of Logistics report, published in September 2016, states: ‘Firms must rethink their strategies and devise more agile models that leverage economies of scale and still meet consumer demands. This spurs a shift from location-based deliveries made of fleet networks to marketplace or app-centric, non-asset-based models.’

Much of Africa’s logistics involves mining and agricultural bulk commodities, and some large logistics providers already use non-asset-based business models.

Imperial Managed Logistics, for instance, describes itself as ‘asset light’ and remains agile by subcontracting to multiple fleet owners. Jan Havenga, director of Stellenbosch University’s Supply Chain Management Centre, told the Mail & Guardian: ‘The last 25 years since transport deregulation has seen consolidation and the emergence of large players with operations across Africa and globally. We have many companies of which we can be proud. The problem lies on the next level. This will mean co-operation with state-owned enterprises and more public-private partnerships.’

Many big companies are aware of this: in 2013, JSE-listed Barloworld and Imperial signed separate MOUs with state-owned freight transport operator Transnet.

This collaboration is contributing to more efficient intermodal solutions and facilitates the shift of bulk commodities and other rail-friendly freight from road to rail where possible – a strategy that is expected to reduce cost, traffic congestion and carbon emissions while preserving the national road infrastructure.

SA – which is home to around 80% of the continent’s total rail infrastructure and a sophisticated road network – continues to be a logistics ‘outperformer’ and ‘over-performer’ among its sub-Saharan peers. The country can hold its own against some of the world’s leading industrialised nations, ranking an impressive 20th out of 160 countries in the World Bank’s 2016 LPI, which measures the efficiency of international supply chains.

SA’s above-average logistics performance is largely a result of an ‘extensive and well-connected transport network that is of superior quality to those of many other SSA states’, BMI Research says in its South Africa Logistics Risk Report, published in October 2016.

‘This means that overland transportation time and cost burdens are significantly lower than in the majority of its regional peers, and on the whole the safety of cargo being transported is less compromised.’

Transport costs are the dominant contributor towards logistics costs, according to the 2016 Logistics Barometer, which is compiled by the Stellenbosch University Logistics Department. In SA, transport costs amounted to more than half (57%) of the total logistics costs in 2014, followed by inventory carrying costs (15.2%), warehousing (14.6%) and management and administration costs (13.5%).

The costs of logistics when expressed as a percentage of GDP are lower in developed than in developing countries, according to the barometer.

While SA is also regarded as the continent’s best performer in terms of trade facilitation logistics, research by PwC found that logistics companies are increasingly looking to the rest of Africa for investment opportunities.

‘There is a fast-growing demand for the vast raw commodities available on the African continent,’ says Andrew Shaw, PwC transport and logistics SA leader. ‘Africa has an abundance of oil, gas, and mineral resources and significant opportunities for agricultural expansion. For logistics companies, prospects in the retail and manufacturing sectors are also significant and lead from a period of sustained growth experienced by many African countries.’ 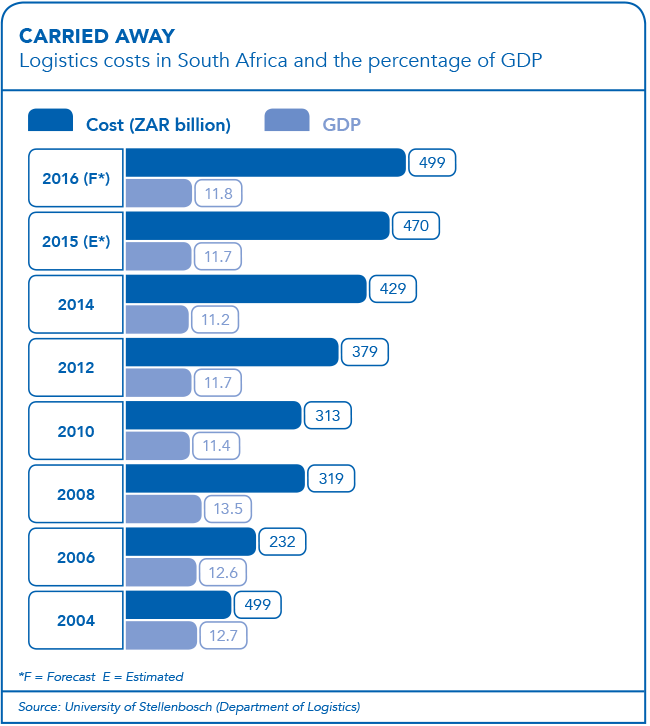 In addition, the barometer found many nations have an over-reliance on road transport and unbeneficiated exports, and are located far away from their trading partners.

Marcel Kohn, route development manager at the SA division of Dachser, the Germany-based intelligent logistics group, says: ‘The South African and the German markets are very different in a lot of ways, and as manager of route development, I must be the connector to both sides.

‘This means that I must make sure we understand – and can accommodate – the particular requirements in each market so that the client experiences a seamless process from one jurisdiction through to another.’

Dachser SA, which has been operating in Africa for nearly 40 years and moves megamachinery and highly specialised equipment, was named Freight and Logistics Company of the Year at the 2016 Africa Transport Awards.

The firm says that the fast-moving pace of the industry requires logistics providers to keep abreast of any developments or changes to their clients’ industries, both globally and locally.

Clearly the performance of the logistics sector is closely entwined with the broader economic conditions and the industries it serves. For instance, the recent slump in commodities markets resulted in reduced exports, which meant less mined material was transported by logistics providers.

According to Cobus Rossouw, chief business development officer at Imperial Logistics: ‘We recognise that our clients are under the same pressure, and remain committed to working alongside them to find ever more efficient, cost-effective solutions to streamline their supply chains and optimise their logistics operations.’

One way of doing this is by centralising and digitising the entire supply chain – a move that is already happening in SA. But there are simpler, low-tech methods regarding driver wellness and training, vehicle maintenance and compliance, that have the potential to significantly improve logistics in Africa, particularly the road-freight segment.

A mobile application developed in Ghana is being used to improve emergency... END_OF_DOCUMENT_TOKEN_TO_BE_REPLACED

At least 50 million COVID-19 vaccines are to be purchased and delivered... END_OF_DOCUMENT_TOKEN_TO_BE_REPLACED

Financing has been secured for the construction of one of Africa’s first... END_OF_DOCUMENT_TOKEN_TO_BE_REPLACED