Escape the chaotic throng of street and pavement traffic into the welcoming, air-conditioned lobby of any hotel in any one of Africa’s capitals nowadays, and it’s very likely that you will be greeted by the bellhop of one of the biggest and best-known international hotel chains.

The major players are here, more are coming and their appetites seem insatiable.

It’s no exaggeration to say that groups such as Marriott, Hilton, Accor and Starwood, with their myriad hotel brands, are springing up all over the continent. If there’s a crane and a building site in an African city, chances are it may be bearing some or other hospitality group hoarding.

Among other news agencies, BBC Africa has reported on the continent’s hotel boom, as has Bloomberg, whose article, Hilton Leads Rush to Africa in Fastest Boom, details how the ‘growing middle class and rising travel are fuelling the fastest pace of hotel development in the world’.

The 2016 Hotel Chain Development Pipeline Survey, produced by the Lagos-based consultancy W Hospitality Group, put growth of the African hotel industry at 30% in a year.

‘Africa is really proving to be the growth story of the 21st century,’ wrote W Hospitality Group spokesperson Trevor Ward in his foreword to the survey report-back.

The spike is attributed to the growth in sub-Saharan Africa, which rose 42.1% on 2015. North Africa’s growth, said to be restrained due to political turmoil and a more mature market, showed a 7.5% pipeline increase in 2015. According to the report, the total pipeline is almost 50 000 rooms.

‘In 2015, all the countries in the top 10 (with the exception of Algeria and Libya) saw an increase in their pipeline from the previous year,’ it states. ‘Kenya and Uganda achieved the biggest increases, at more than 100% and 90% respectively, although off a smaller base than the four leading nations.’ Despite political turmoil, ‘Egypt recorded a substantial 37% increase in its pipeline’.

Nigeria has by far the most rooms in the chains’ development pipelines, with in excess of 8 500 rooms in 51 planned new hotels. This is more than the entire pipeline in Central and East Africa combined.

Hilton is growing widely across the continent and will double in size from almost 40 hotels today to around 75 hotels across Africa in the next three to five years, it reports.

‘We’re introducing market-leading brands into Africa,’ says Michael Cooper, Hilton’s vice-president of development (sub-Saharan Africa). Hilton recently opened its first hotel in Chad (Hilton N’Djamena), with new countries – including Swaziland, Tunisia, Botswana and Zambia – all in the pipeline in the next couple of years.

Among its new hotels is Africa’s first modular build hotel, the 280-guest room Hilton Garden Inn in the Ghanaian capital of Accra, a concept that Hilton first premiered in 2014 through a partnership with CIMC Modular Building Systems.

Other deals see the creation of Africa’s tallest hotel in Nairobi, while Hilton builds on its industry-leading airport hotel legacy with an extension to the recently signed Legend Curio at Lagos Airport. Hilton will manage all three properties as it continues to expand its managed hotel portfolio.

Looking ahead, Hilton is seeking to increase its footprint from its existing 11 192 rooms to more than 8 500 in the next three to five years, with entry into at least 10 new markets.

For its part, Carlson Rezidor established an accelerated growth strategy for Africa in 2014, with a plan to double the size of its portfolio in six years. ‘To achieve this, we needed to create a focused strategy for Africa and provide the team with the tools to execute the strategy,’ says McLachlan.

Its strategy is to establish critical mass in two key countries, namely South Africa and Nigeria, and exploit opportunities across target markets, which it has identified as Kenya, Ethiopia, Tanzania, Mozambique, Angola, Ghana and Algeria.

Other strategic plans include developing business tourism routes in Africa’s three main economic communities – the EAC, ECOWAS and SADC, leveraging off its brand-enhancing African hotel portfolio as it continues to open new flagship hotels, such as the Radisson Blu in Kigali, Lome, Nairobi or Maputo; leveraging off the success of AfriNord and other innovative financial models; taking advantage of its Africa area office, where it provides full hotel management support services.

‘We expect to maintain this aggressive African development strategy into the future with an ambition to have more than 23 000 Carlson Rezidor rooms in Africa by the end of 2020.’ 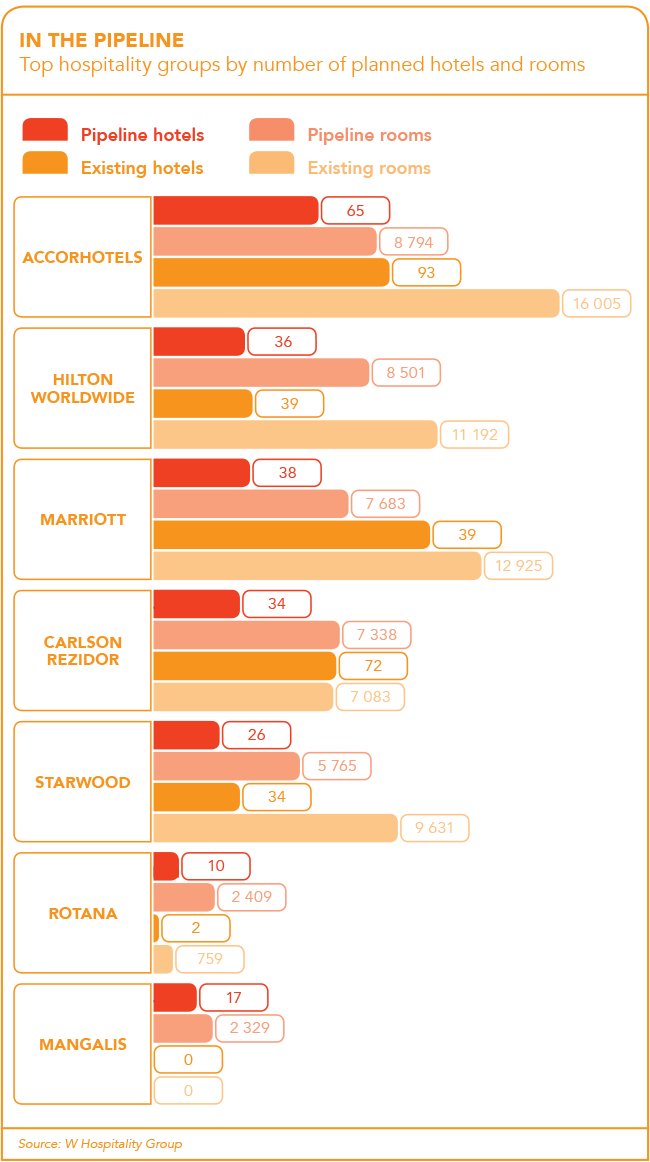 Another group firing on all cylinders is AccorHotels, the continent’s leading hotelier by number of rooms. It operates in 21 African countries, with in excess of 10 000 employees and 110 hotels. Accor has 11 brands, covering the spectrum from economical to luxury. These include Raffles, Fairmont, SO, Sofitel, Pullman, MGallery by Sofitel, Mercure, Novotel, Ibis, Ibis Styles and ibis Budget.

‘2015 will also be remembered as record-breaking year for AccorHotels’ expansion in Africa,’ says AccorHotels spokesperson Agnès Guillard. The group’s ambition is to reach 200 hotels by 2020 and 300 by 2025.

At the beginning of 2016, AccorHotels opened a hub dedicated to this development in Johannesburg. Its aim is to help the group expand in East and Southern Africa.

The continent remains a key market for development and investment, says Cooper, who considers it one of the most promising emerging markets globally.

‘We see Africa as a key region for growth. Having been present in the continent for more than 50 years, we’re proud to have remained at the forefront of pioneering hotel growth on the continent,’ he says.

One of the most prevailing reasons for the continent being popular in terms of trade and investment is its wealth of natural resources and export opportunities, and the cost of doing business is favourable compared with other emerging markets, according to Cooper.

In addition, says McLachlan, Africa still suffers from a general undersupply of quality hotel rooms in many cities, so the outlook for the hotel sector in Africa remains positive.

He believes there are strong underlying long-term economic and demographic fundamentals, despite the current decline in economies in the region.

‘Even with slowdown in commodity prices in 2015, Africa’s GDP growth is still almost double the global average,’ he says.

Economic growth has a direct and amplified impact on demand for hotel accommodation and consequently hotel profitability and supply growth, says McLachlan.

‘When one enters a new country and emerging market, a quality hotel not only provides the best sleep in town, but also the best restaurant and bar, best laundry and dry cleaning, banqueting, etc. So the hotel needs to provide all the facilities.’

The WEF’s 2015 Travel and Tourism Competitiveness report ranked South Africa as sub-Saharan Africa’s ‘most tourism-ready economy’. That score was largely due to its capacity to host major (sporting) events and efforts to reduce red tape and encourage business development in the tourism industry.

In addition, the 2016 Where to Invest in Africa report by Rand Merchant Bank determined through an economic and operating environment index that the top 10 African countries to invest in are South Africa, Egypt, Morocco, Ghana, Nigeria, Ethiopia, Tunisia, Algeria, Tanzania and Kenya.

‘All these countries have shown a stable growth not only in tourism but also in the macroeconomy,’ says Cooper. ‘And all are countries where you can expect to see increased travel and tourism activity with additional hotel growth and development to support that.’

The boom in business hotels is great news for local economies. Some 8 million people are directly employed in the travel and tourism business according to the World Travel and Tourism Council (WTTC), centred mainly in Southern and North Africa, with pockets in East and West Africa focused on beach and safari holidays.

The industry has proven itself to be a significant contributor to the continent’s GDP, exceeding that of many other important sectors. The WTTC predicts that this will increase as more air routes, hotels and businesses open up.

Tourism is undoubtedly one of the key industries in driving economic growth and job creation.

The continent continues to remain attractive to investors when it comes to business, capital and trade investment, leading to rising demand for accommodation and hospitality products, according to Cooper.

‘With this in mind, the increasing number of tourists and increased spending is bound to influence employment within the industry.’

Ghana has opened its first farmer-owned cocoa fermentation centre. The facility, at... END_OF_DOCUMENT_TOKEN_TO_BE_REPLACED

An initiative supporting efforts to ensure the continuation of education amid the coronavirus... END_OF_DOCUMENT_TOKEN_TO_BE_REPLACED

The Namibian government is rolling out a NAD500 million COVID-19 loan scheme... END_OF_DOCUMENT_TOKEN_TO_BE_REPLACED