If you want to see the future, head to National Chiao Tung University (NCTU). Located in northern Taiwan’s tech capital, Hsinchu City, it is one of the state’s most elite public research schools, with a string of Nobel Prize laureates listed among its faculty and alumni. Universities don’t get much more high-tech than this. A recent smart-campus project at the university has caught the attention of tech commentators around the world – and especially those in Africa.

In partnership with Nokia (through its ng Connect programme), NCTU deployed an internet of things (IoT) smart-energy management platform on its campus, leveraging IoT capabilities to radically reduce its energy costs. However, it wasn’t simply a fun experiment – the university has been grappling with government energy-reduction mandates to reduce energy use by 1% per year.

That’s a huge challenge, given that studies in the US have found that about 67% of university building energy costs are due to lighting, heating, cooling and installed equipment. The first-phase roll-out, which used connected devices and video analytics to sense and respond to building occupancy levels – has already produced expected energy savings of between 11% and 15%.

That’s just a smart university. Now imagine the possibilities of a smart city.

In some African cities, ‘imagining’ might be as close as we’ll ever get to having proper, connected, efficient smart-city solutions – until you start analysing the data.

A recent Deloitte report notes that ‘over the past decade, large multinational IT firms have begun predicting Africa will be “the next big market” due to the emergence of many rapidly growing economies. As such it is a fair statement to make that many African cities are at the crossroads of velocious development in one shape or another, providing the unique opportunity for cities to innovate and lead a new generation of thinking while demonstrating tangible benefits to their citizens and to the world’.

When compared to mature cities such as London and New York, according to the report, African cities can currently be considered to be behind the curve. It adds, however, that ‘this is not a pre-destined outcome as African cities can, through the successful adoption of the ideology and technology underpinning the smart-cities concept, become globally competitive. It is through the adoption of advanced technologies and lessons learned from mature cities that the anticipated growth need not be one step at a time, but rather exponentially in functional, economic and social aspects’.

Want a glimpse into the future of Africa? Go to the Transform Africa Summit (TAS). This year’s event, which took place this past May in the tech hub of Kigali, was held under the theme Smart Cities, Fast Forward. As Rwandan President Paul Kagame said in his address to the summit, there was good reason for that. ‘Africa currently has the world’s fastest-growing cities but even so, Africa remains the least-urbanised continent. Taken together, these facts tell us two things. First, Africa is not as prosperous as it should be because our cities are too small and disconnected.

‘Second, this situation is changing rapidly and Africa looks set to emerge as one of the planet’s great centres of growth, innovation and opportunity in the generations ahead. However, we cannot take this trend for granted. This puts the urgency and relevance of the smart-Africa agenda into its proper context. The word “smart” is really about leveraging digital technologies to narrow the gap between the high-quality services we need, and those we can afford, and to do so quickly,’ he said.

Kagame added that ‘Africa has to be connected. And why not at the highest-possible speeds? At first glance, the figures appear low – just 20% of Africans have internet access and there are only three years left to meet the Broadband Commission’s target of 50%. However, this must be regarded as an opportunity for stronger public-private collaboration. In Rwanda, for example, our partnership with Korea Telecom has already served to speed up our progress toward the broadband target’.

People across Africa face diverse challenges – many of them existential – and potential solutions to these concerns probably already exist. ‘But that isn’t the problem,’ strategic manager at Sebata, Deonie Botha, said in a statement released after the TAS summit. ‘The problem is that without the right devices, connectivity and skills, the people who badly need these solutions often can’t access them. In our internet-centric world, access is largely dependent on the availability and development of ICT solutions.’

Deloitte’s Smart Cities report argues that African cities are advantageously positioned to adopt smart-city technologies. ‘African cities’ advantage for technological adoption far surpasses their Eastern and Western counterparts as many of the cities don’t suffer from the crippling costs associated with the maintenance of legacy infrastructure and systems,’ according to the report. ‘Cities have the opportunity to start with the latest technology available, thereby immediately thrusting them as competitors into the global marketplace.’ 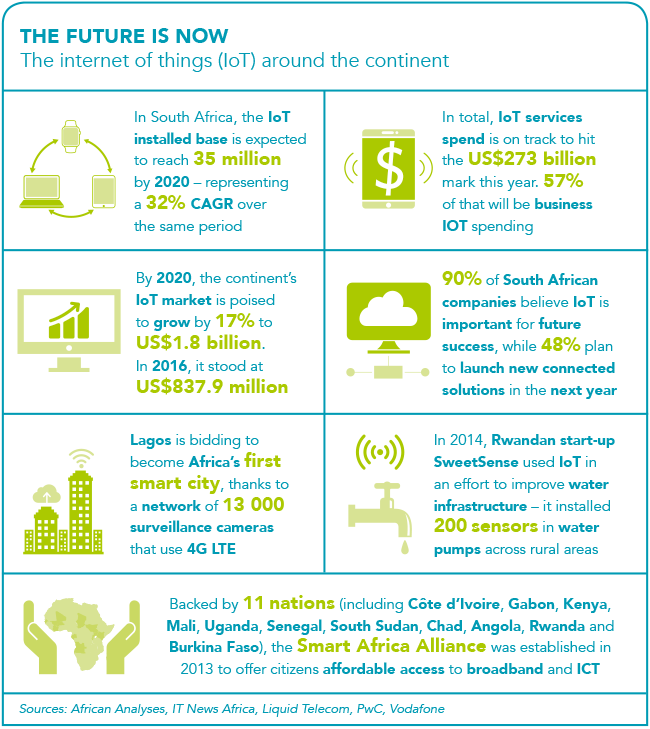 The report cites Ethiopia, Libya and South Sudan as examples of countries that don’t have substantial telecoms cable installations, and therefore would not need to consider the upgrade path from analogue to ADSL. ‘They can immediately look to move forward with a pure implementation of the latest 5G/LTE network,’ the report states.

Smart cities are driven by data – masses and masses of information uploaded to and downloaded from the cloud, shared between thousands of connected machines and devices. Supporting this requires hyperscale computing, which facilitates efficient scaling from a few servers to thousands of them.

In August, Teraco (Africa’s largest, neutral data centre) launched its Riverfields Hyperscale Centre east of Johannesburg. With more than 24 MW of power and 6 000 m² of technical deployment space, it’s the largest commercial data centre operator in Africa. According to Lex van Wyk, Teraco CEO, the centre was built in response to growing demand for facilities such as these across sub-Saharan Africa.

‘The demand is driven by big data and cloud computing, as well as enterprise organisations that consume these services locally,’ he says. ‘Many of these have not been available locally or are only in limited functionality due to restrictions presented by high latencies due to distance.’ Internationally, the global colocation market is expected to grow to in excess of US$50 billion by 2020, at a CAGR of more than 12% from 2015 to 2020. Most of this demand is being driven by the enterprise, IT and telecoms sectors.

‘Hyperscale computing has grown enormously, as has demand for colocation facilities,’ says Van Wyk. ‘These trends combined are shaping the way forward for Africa, and we anticipate significant uptake as more service providers pinpoint Africa as a growth market.’

African cities are well positioned to leapfrog into the mid-21st century. Deloitte’s report, however, asks: ‘If Africa is being referred to as “the next big market” by multinational IT companies, and it can immediately enhance the quality of life for the citizen, the private sector and the public sector alike, the question that begs an answer is: why isn’t it happening faster?’ Smart question. And from Teraco’s enormous data centres to Rwanda’s connected cities, it’s one that Africa is already starting to answer.

Digital data technology, as well as barcode scanning, will be employed in... END_OF_DOCUMENT_TOKEN_TO_BE_REPLACED

Farmers in East Africa have a free, new mobile tool at their... END_OF_DOCUMENT_TOKEN_TO_BE_REPLACED