ADSL is dead. And that we are in an age and an industry where nothing is ever certain (who would have predicted the demise of the BlackBerry?) is at least one thing that virtually everybody can agree on.

In a recent TechCentral podcast, ICT firm Vox CEO Jacques du Toit declared that South Africa would ‘definitely not’ have copper-based digital subscriber line internet connectivity in the long term. ‘We all know Telkom is doing nothing to continue with their maintenance programmes on ADSL,’ he said. ‘They are replacing it with metro services, with fibre services. Where it’s being stolen, there’s no replacement. Exchanges aren’t being upgraded or kept up to speed. I think five years is a push. Copper’s days, in my mind, are gone.’

Global trends back him up. Market research firm Point Topic’s report for Q3 2016 on trends in global broadband subscribers showed how quickly ADSL’s decline is accelerating. Worldwide, the number of copper lines fell by 11.6%, while fibre-to-the-home (FTTH) connections increased by 76.9% between Q3 2015 and Q3 2016. That trend continued into Q1 and Q2 2017. But you don’t need market research to tell you that ADSL is dying – or that FTTH is killing it.

In an interview with MyBroadband, Webafrica product owner for hosting and connectivity Greg Wright confirmed that three times more customers are signing up for FTTH than ADSL. ‘We are seeing tremendously strong growth in the FTTH market. The only constraint currently is the underlying infrastructure player who can’t install our customers fast enough. A significant number are migrating from ADSL to FTTH, and this number is particularly high at Webafrica because we’re actively encouraging the conversion through internal mechanisms.’

Ralph Berndt, sales director at South African internet service provider Syrex, agrees. ‘South Africa is in a massive growth phase – which has been seen in many countries around the world – where fibre has become the key to delivering internet services to clients,’ he says. ‘The outlook is very positive and we expect the majority of primary and secondary metros to have fibre-to-the-business and home by the end of 2020.’

It’s a booming industry. At the beginning of 2016, licensed open-access fibre network provider Frogfoot Networks embarked on an extensive 24-month expansion programme that will see it deploy FTTH to 85 000 homes.

‘2018 will see the deployment of the remaining 53 300 homes,’ says Frogfoot MD Abraham van der Merwe. ‘Although it is likely that this figure will grow substantially as the demand for FTTH continues. There is a massive appetite for fibre in South Africa, which is mainly driven by the current state of the existing cabled network that is simply not meeting the needs of the consumer. 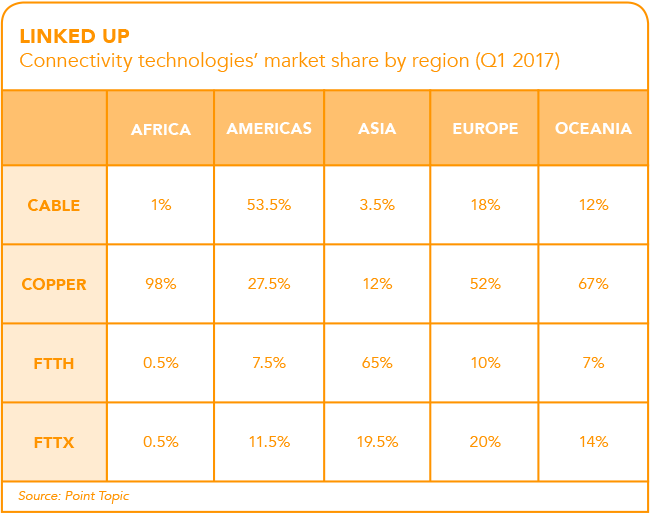 ‘Today users want high speed, uninterrupted connectivity at work and home, and it is this frustration that is driving fervent demand.’ Van der Merwe adds that the addressable FTTH market in South Africa alone is between 3 million and 6 million homes. ‘Although deployment is driven by the commercial viability of the project and consumer demand, there remains huge untapped possibility.’

Similar conversion is happening across Africa – although at a much slower rate. The Gabon Energy and Water Corporation and the Vivendi Group recently entered into an agreement that will see Vivendi financing the deployment of high-speed broadband internet via the national electricity grid. Since the turn of the year, MTN Zambia has unveiled its own FTTH product while Namibia has seen Paratus Telecoms become the first privately owned pan-African operator to turn on FTTH. But five markets – Kenya, Mauritius, Morocco, Nigeria and South Africa – still account for 85% of the continent’s FTTH connections.

The great demand for high-speed internet in South Africa is not surprising. What is, however, is the extent to which FTTH is devouring ADSL. Consider this: FTTH is still only available in a few metropolitan neighbourhoods, while ADSL is available across the country. So what’s behind the numbers? ‘Fibre is currently the best form of internet you can get,’ says Colin Thornton, CEO of IT support firm Dial a Nerd.

South Africa’s initial fibre roll-out was based in suburban areas and around key metros. But away from the hype, in the agricultural heartland of the North West province, Potchefstroom-based telecoms provider Safricom has been deploying fibre, wireless or a combination of the two. ‘Whatever it takes to get our clients connected,’ says founder Johan Kruger.

Safricom’s next big play will be to take their existing FTTH infrastructure and use it to roll out gigabit technology. It’s a significant development. While your average home fibre connection is about 10 Mbps to 20 Mbps, gigabit internet promises download speeds of 1 024 Mbps.

‘So far we haven’t provided gigabit service because our backbone hasn’t been big enough, but we’re increasing our backbone so that from 2018 you’ll be able to get gigabit fibre as a home user in rural Potchefstroom,’ says Kruger.

‘Our clients are already connected on fibre, and the technology and infrastructure allow for gigabit – so we just need to finish increasing our backbone, and then we’ll open up the pipe so that our end users can get gigabit services.’

And while most of the popular conversation around the nation’s braais and water coolers has been about FTTH, the technology is driving improved connectivity for businesses too. ‘Consumers utilise fibre-to-the-home services primarily for on demand content, streaming and searching,’ says Berndt.

‘Digital streaming of TV such as Netflix and Showmax are driving the pressure on getting fibre-to-the-home. Businesses, however, are looking for faster internet capacity to drive their online applications as well as their need to consume their applications and services in the private and public cloud, as opposed to having them on premises.’

For Thornton, there’s hardly any question about whether home consumers need FTTH. ‘If there is a fibre-to-the-home initiative in your suburb, then the answer is yes. Even if the cost is more than you previously paid for internet, there are ways of cutting other costs to make the total expense comparable,’ he says.

‘You could cancel your landline and use voice over IP [internet protocol] instead. Or cancel your TV satellite subscription and subscribe to an internet service like Showmax or Netflix. For businesses and schools that rely heavily on the internet, then fibre is even more of a necessity and should pay for itself quickly. The only time we wouldn’t recommend fibre is if you are a very occasional internet user and don’t have the types of expenses listed above that you can cut.’

According to Riaan Graham, sub-Saharan Africa sales director for global wireless firm Ruckus: ‘Fast internet is a productivity tool for businesses – eliminating speed issues could result in a week’s worth of productivity increases each year. Productivity issues that are directly attributed to slow or unreliable cable internet could disappear with fibre.’

Graham expects that the rise in fibre use and deployments will affect businesses positively in the long run, as super-fast broadband improves work-life balance and can enable people to work from home-based offices. ‘It also provides efficiency improvements and cost savings through online sales, marketing and improved cloud-based services,’ he says.

The great South African fibre ‘land grab’ of a year ago is now ending. The market is settling down and key players are emerging. In July, Vumatel – one of the earliest and now one of the largest – expanded its footprint even further when it bought a large portion of Link Africa’s FTTH infrastructure.

Openserve, meanwhile, announced price reductions of up to 32%, effective June 2017, on its IP Connect product, which enables ISPs to connect to their broadband network to provide their own DSL and FTTH offerings. ‘This particular price reduction is effected with the intent to reduce the cost of entry for the smaller players in the broadband resell space,’ Prenesh Padayachee, Openserve chief of sales and marketing, said in a statement.

Call it a land grab, call it a gold rush. Ultimately, South Africa’s home and business internet users are benefiting from reduced prices and a wide array of choices. When MyBroadband published a comparative list of fibre providers in March, it ran to almost 40 ISPs – including Afrihost, Cybersmart, Webafrica, Telkom, Vodacom, CipherWave Home Connect and new entrants Phoenix Telecoms. And that’s just in South Africa.

‘The story of fibre in South Africa has really just begun,’ says Graham. ‘Government plans to have fibre cables in place throughout South Africa by 2020, and while FTTH is continuously on the rise in South Africa’s main residential suburbs, there is still a far way to go – especially outside highly affluent areas. The good news, however, is that there are a number of service providers that are focusing on fibre and driving residential connections, and as more connections come on line and speeds increase, prices start to drop.’

Graham adds that fibre is bringing a more stable, reliable and faster level of connectivity. ‘This makes accessing cloud services and the possibility of the internet of things easier and quicker, opening up innovation for both businesses and consumers alike.’

The first transshipment cargo has docked at the new deep-water Port of... END_OF_DOCUMENT_TOKEN_TO_BE_REPLACED

A US$50 million trade-finance facility has been created to help support Africa’s... END_OF_DOCUMENT_TOKEN_TO_BE_REPLACED