Compact. Catch Up. Premium. Three names representing three different entertainment viewing options – as any avid DStv subscriber will know. Compact features 95 channels fit for the whole family and is the company’s most basic package. Its Catch Up feature allows users to watch series and movies when it suits them best, while the Premium offering carries the most channels (close to 150), allowing users to connect their Explora decoder to the internet and view content on up to five electronic devices with a single subscription.

For more than two decades, MultiChoice’s DStv (owned by South African corporation Naspers) – with its vast array of options and packages – has, for the most part, dominated the pay TV market in Africa.

According to World Wide Worx MD Arthur Goldstuck, there are several reasons for the company’s dominance. One is that since its establishment, it has been a broadcast-technology pioneer, continually building on and evolving its service. ‘That sheer momentum is hard to challenge,’ he says. ‘Secondly, it has also secured the rights to most major live sports, which others don’t offer or simply cannot afford. It takes a long time to move a market, and we can expect it to maintain its dominance for at least the next five years.’

Despite MultiChoice holding a substantial share of the continent’s viewership, in the last few years competition from video-on-demand (VOD) and other players such as subscription-based providers have entered the pay TV space. Thanks to technological advancements, viewers are now spoilt for choice. One of the oldest ways of tuning in is via satellite (through providers such as DStv), which broadcasts content from a central point, enabling viewers to ‘tune in’ to specific channels on that signal. And now, through over-the-top streaming/VOD (think Netflix and Showmax), viewers select what they want to watch and, more importantly, when they watch it. The content is delivered through the internet and can be streamed via various devices such as a laptop, tablet or smartphone.

Then there’s digital terrestrial television (DTT). It was developed as part of a global commitment by the International Telecommunication Union, which called for national broadcasters to switch from analogue to digital by mid-2015. The motives behind the shift are quite simple – analogue technology is outdated and expensive to maintain, whereas digital signals are compressed and capable of carrying up to 10 more channels on the same frequency as one analogue channel. This form of viewing requires a set-top box (much like a satellite decoder) to receive signals.

Entertainment and media leader for PwC Southern Africa, Vicki Myburgh, says it has become increasingly clear that consumers see no significant divide between digital and traditional media. ‘What they want is more flexibility, freedom and convenience in when, where and how they interact with their preferred content.’

Testament to TV viewers being prepared to pay for content are forecasts of pay TV revenues across sub-Saharan Africa growing by 57% between 2016 and 2022 (up US$2.4 billion to reach US$6.59 billion), according to UK-based Digital TV Research estimates. At this pace, it is set to overtake Eastern Europe by 2021. 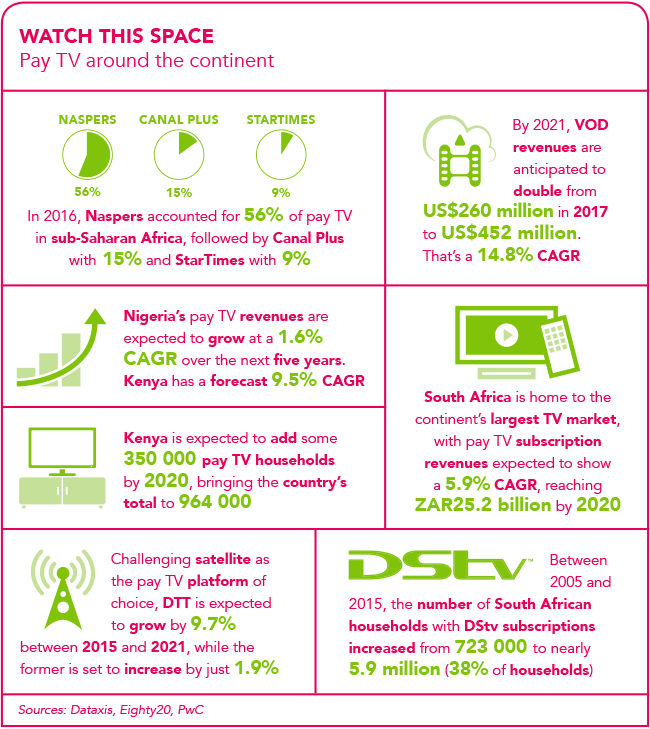 South Africa holds the largest chunk of the continent’s TV market, and is expected to maintain strong growth, with pay TV subscription revenues forecast to expand by a 5.9% CAGR, reaching ZAR25.2 billion by 2020. Its subscription rate is set to rise to 42.1%, as the country adds an additional 2.1 million households to the market, says PwC.

According to a report titled Sub-Saharan Africa Pay TV Forecasts, Nigeria (the second-largest market in sub-Saharan Africa) is geared to increase its pay TV subscription base from 4.46 million in 2016 to 8.45 million by 2022. A great deal of the growth in pay TV revenues will be attributed to services that offer content-on-demand, such as VOD.

Early last year, US-based media giant Netflix made its way onto the continent, where it is now available in 54 countries. While it has certainly piqued the interest of viewers across the continent (particularly in South Africa, where there is strong uptake among fibre-to-the-home consumers), Simon Murray, principal analyst at Digital TV Research, believes the service won’t make much of a dent in the continent’s industry just yet. ‘Netflix is too expensive for most Africans,’ he says. What’s more, the service lacks local content; most of the US content isn’t available to Africans; and its fees fluctuate with exchange rates.

Murray highlights cost-effective alternatives that continue to gain subscribers (especially given their abundance of local content). These include Nigeria’s iROKOtv (touted as the Netflix of Nollywood), and MultiChoice’s Showmax, which is available in most of the continent’s countries and is currently one of South Africa’s most popular VOD platforms, especially after being included as a free service for Premium DStv subscribers.

‘Showmax is also becoming a key part of the entertainment mix in Kenya, where it is structuring its service to meet local needs,’ says Goldstuck. ‘These strategies will be pursued even more aggressively, especially since it has started producing original content as it gears up to be a competitive answer to Netflix.’

There is also competition from players beyond the continent, one of them being China’s StarTimes. The company made its African debut in 2002 in Rwanda, and has since reached around 7 million subscribers in more than 13 sub-Saharan African countries, including Kenya, South Africa and Tanzania. It’s currently the biggest provider of pay TV in Nigeria. Last year, the company announced ambitious plans to more than triple its subscriber base to 30 million across 30 African countries by 2018.

Another new addition to Africa’s pay TV market is Kwesé TV. Established under the Econet Media umbrella, the service has been launched in a number of countries, including Zimbabwe, Zambia, Ghana and Rwanda. A recent partnership with Netflix saw Kwesé being launched in South Africa, where viewers pay only for the channels they want to watch.

In countries such as Ghana, Zambia and Rwanda, the service offers around 45 channels (with up to 30% African content), as well as dedicated content from the US-based sport channel ESPN.

French pay TV giant Vivendi’s Canal Plus has also catered for African viewers by launching four sports channels (broadcasting premium events such as UEFA Champions League) in 2015. This came after the company made its continental debut a year earlier, focusing on French-language content in 30 African markets. And then there’s Malaysian subscription streaming video service iflix, which launched in Ghana in September. Earlier this year, the company secured US$133 million in funding to facilitate its African expansion plans – bringing the total investment raised to US$220 million this year alone.

Much of the new funding will be used to invest in local content to complement iflix’s international video content, as it aims to take on competitors such as Netflix and Showmax.

According to an AFKInsider report, the VOD service plans to launch in South Africa
by the end of this year, as well as Nigeria, Kenya, Tanzania and Zimbabwe.

Despite VOD transforming the landscape of African television, satellite TV and DTT will continue to be the continent’s strongest pay TV format, and is expected to be dominated by three companies that offer both – MultiChoice, Canal Plus and StarTimes.

According to Digital TV Research data, MultiChoice has more than 11.6 million subscribers across its satellite TV platform (DStv) and DTT platform (GOtv ), and is predicted to grow to 17.66 million by 2022. Meanwhile, Vivendi added 2.32 million subscribers to its Canal Plus satellite TV and Easy TV platforms, and is projected to climb to 4.32 million by 2022.

StarTimes, however, has a limited number of DTT licences on offer, and is therefore focusing more on its satellite TV operations, StarSat. Yet, the service is predicted to see the most impressive growth, says Murray, who anticipates subscriber numbers will jump from 4.18 million in 2016 to 10.61 million by 2022.

Even with entertainment and media companies facing an ever-more challenging and complex environment, Myburgh believes this is the time companies need a more detailed understanding than ever before of the various forces at play, at a local level.

‘In spite of widespread distribution in the entertainment and media industry, as well as intense competition for consumer attention, there are growth opportunities aplenty for companies to capitalise from in the new media landscape,’ she says.

To ensure success within the pay TV market, she recommends that media companies innovate around the product and user experience; develop seamless consumer relationships across distribution channels; and put mobile – and increasingly video – at the centre of the consumer’s experience.

Egypt is building what could be the world’s largest solar hybrid facility... END_OF_DOCUMENT_TOKEN_TO_BE_REPLACED

Targeted insurance is being developed to help protect Madagascar’s farmers against the... END_OF_DOCUMENT_TOKEN_TO_BE_REPLACED

Botswana is on track to become the first country in Africa to... END_OF_DOCUMENT_TOKEN_TO_BE_REPLACED