It was not even 25 years ago, but in tech terms it may as well have been the Stone Age. On 1 June 1994 – mere weeks after South Africans voted in their first democratic elections, and just days before the Fifa World Cup kicked off in the US – Vodacom and MTN launched their commercial operations. South Africa had entered the Mobile Phone Age.

You (or your parents) may remember those early phones. MTN’s Nokia 1011 (aka ‘The Brick’) featured a two-line, eight-character monochrome display, and offered 90 solid minutes of talk time. Vodacom’s Ericsson GH337 had a watch and an alarm, and gave you 110 minutes of talk time. Calls cost less than ZAR1. It was a wonderful time to be alive. The future had arrived.

Those first mobile phones ran on 2G, the second generation of cellular telephone technology. While 2G was characterised by voice communication, its successor 3G introduced faster data transfer rates, which enabled video calls. The fourth-generation, 4G, provides ultra-broadband internet access for your mobile device – and that technology is what lets you stream YouTube clips of 1990s cellular phone TV commercials while you’re waiting to board a plane. (‘Yebo Gogo!’).

Now cellular technology is entering its fifth generation… And everything’s about to change. MTN and Ericsson proved as much in January, at Africa’s first 5G trial. MTN tested a range of 5G use cases and applications in its South African proof-of-concept test lab, achieving unprecedented download speeds of more than 20 Gbit/s – significantly faster than the fastest connection speeds available to South African consumers over fixed fibre-optic lines. Latency (the time it takes information to travel around the network) was just 5 ms.

Speaking at the announcement event, MTN South Africa’s chief technology and information officer Giovanni Chiarelli described the technology’s potential impact. ‘With 5G, remote healthcare through connected robots could offer world-class surgery in the most remote parts of the continent and the world,’ he said. ‘Self-driving cars could change the face of road safety, along with smart agriculture, smart mining and smart cities.’

Blogging about the event, Ericsson’s programme manager for sustainability and corporate responsibility, Candice Taylor, wrote: ‘5G is not just the next step in the technology evolution from 2G voice to 3G data to 4G LTE or better data but a potential game changer. And, it’s not just about faster data speeds – being able to download a hundred videos simultaneously. Why ever would you need that anyway? It’s about enabling the fourth industrial revolution, of the IoT [internet of things] and AI.’

She said that the IoT, particularly, is looking very positive, ‘not only for industrialised coun- tries, but for small- and medium-sized businesses in Africa wanting to use data analytics for quality and scale, for NGOs and governments wanting to track and protect wildlife and the environment. Occupational health and safety, risk management and transparency are all areas where Africa might benefit hugely’.

Last November, Vodacom – MTN’s great rival since ’94 – announced an agreement with Nokia, which will see the companies trialling Nokia’s 5G technology ahead of a launch in South Africa. ‘It is my firm belief that the adoption of 5G will help us to deliver against some of the digital technologies in areas such as big data analytics, artificial intelligence, virtual and augmented reality, autonomous vehicles and the internet of things,’ said Andries Delport, Vodacom’s group chief technology officer. ‘Quite crucially, Africa is in the middle of a mobile connectivity boom, and as such, 5G will help us to deliver faster internet speeds to our almost 70 million customers across the group.’ 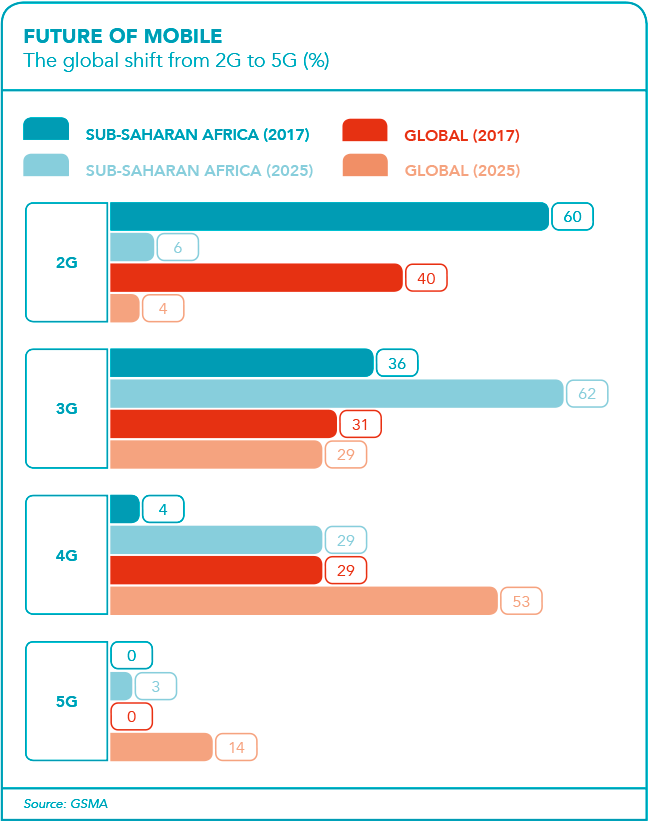 Looming in the background of those high-speed trials, tests and MoUs, is the question of when – or whether – Africa’s telecoms industry will be ready to deploy 5G. While 5G promises significantly faster speeds than 4G, 4G has only recently started to come into play as a viable option on the continent.

Speaking in October at the annual FTTX Council Africa Conference in Cape Town, South Africa’s Minister of Telecommunications and Postal Services Siyabonga Cwele identified two major challenges to the country’s 5G roll-out. ‘The first challenge is access by the operators,’ he said. ‘This will be managed by the Rapid Deployment Policy, which will streamline permissions and access by network operators to enable a faster roll-out of services. The second is skills. To be able to progress to 5G, we first need to stimulate skills and innovation. You cannot even think of a smart city if you cannot first encourage and facilitate innovative development.’

For Eckart Zollner, head of new business development at listed tech firm Jasco, it’s a question of cost and of spectrum. ‘The 5G networks are expensive to deploy,’ he said in a widely published opinion piece. ‘With many operators only in the middle to final stages of their 4G roll-out, investing in the infrastructure required to facilitate 5G is a costly task.’

Zollner added that there is already a shortage of spectrum available for 4G network operators. ‘South Africa’s spectrum regulator, Icasa, will need to work closely with the government and stakeholders to ensure that similar shortages and allocation delays do not occur,’ he said. ‘For the time being, there is little clarity on 5G spectrum allocation and it is likely that until a clear framework is in place, 5G roll-outs will be hampered.’ But Zollner was adamant ‘5G could answer many of Africa’s current connectivity concerns. Particularly in areas where fibre is unable to reach or too costly to invest in, 5G uptake will be massive’.

Chiarelli also highlighted the potential delays as the firm waits for access to additional radio frequency spectrum. At the time of the company’s 5G test, Icasa had not formally allocated spectrum to local operators to deploy 4G infrastructure, let alone 5G. As a result, operators have been reallocating their 2G and 3G spectrum to 4G. ‘There is no doubt that 5G will offer the consumer higher speeds and lower latency, but to achieve this we need the capacity that comes with additional spectrum,’ said Chiarelli. ‘We are talking about blocks of hundreds of megahertz, or even gigahertz.’

Given those challenges – along with the need for follow-up testing and trials – South Africa remains at least two or three years away from commercially available 5G. MTN put the timing of its commercial launch at around 2020, while Vodacom (without giving a date for its own launch) has indicated that the first international network pilots were only expected in the latter part of 2018, with commercial launches in the first half of 2019.

State-owned telco Telkom is focusing on expanding its 4G speeds. ‘We believe this enables better delivery with the current available technology at an affordable price point for the South African consumer,’ Telkom consumer CEO Attila Vitai wrote in an op-ed. ‘By contrast, it is harder to make a consumer case for 5G, particularly as end-user devices and support services are not readily available and their affordability in South Africa is not yet clear.’ Vitai added that, ‘while 5G is definitely a part of our technology roadmap, we are focused on offering a connectivity solution that is immediately available and offers customers an experience better than any of our competitors can offer’.

The strategy makes sense, but when 5G kicks off, it will be difficult to describe 4G as a better experience. ‘5G will be a commercial reality for a couple reasons,’ Ericsson CEO Börje Ekholm told the Mobile World Congress in February. ‘The first is data traffic. We need 5G to bring cost per gigabyte down. We also see that early movers in new technology gain a benefit. We saw that with early movers in 4G – they get higher average revenue per user and higher market share.’ Ekholm hinted at the possibilities offered by 5G, giving a nod back to the days before 4G, when mobile phones were still a relative novelty and smartphones weren’t in the picture. ‘Think about the smartphone,’ he said. ‘Did we think that we would use it to stream video and music, order food and order a cab? No. The new use cases will come as the technology matures.’

Now imagine the world that 5G will have created, two decades from now.

Egypt is building what could be the world’s largest solar hybrid facility... END_OF_DOCUMENT_TOKEN_TO_BE_REPLACED

Targeted insurance is being developed to help protect Madagascar’s farmers against the... END_OF_DOCUMENT_TOKEN_TO_BE_REPLACED

Botswana is on track to become the first country in Africa to... END_OF_DOCUMENT_TOKEN_TO_BE_REPLACED