When a ferocious drought caused the City of Cape Town to adopt extreme water-saving measures last year, people adjusted. They made do with lightning-fast showers, used hand sanitiser instead of washing their hands, and let their gardens wilt. But, for many, the most confronting change was to their toilet routine. South Africans realised what had long been apparent in other water-scarce areas. The old hygiene habit of flushing away everything with potable water can simply no longer be maintained.`

Worldwide, hygienic toilet facilities are crucial to public health. According to a 2017 WHO/Unicef report, 2.1 billion people lack access to clean water at home, while 2.3 billion cannot access safe and sanitary toilets. The health impact is significant.

Every year, more than 360 000 children under five die from diarrhoeal disease. Major drivers of infectious illnesses such as cholera, dysentery and typhoid include open defecation on the street or in pits, and human waste being discarded on rubbish heaps and into water sources. But these problems won’t be solved with more flush toilets – the greatest household water wasters. The South African Water Research Commission (WRC) estimates that up to 40% of all fresh water is used to flush human waste.

With accelerating climate change, we can’t invest in technology that needs abundant running water: there simply isn’t enough to go around. What’s required is a total reboot of the toilet model – or, as the WRC’s Jayant Bhagwan told the recent Water Institute of Southern Africa conference in Cape Town, we need to stop using potable water for human waste.

Obstacles to tackling this problem include social taboos, and people’s natural aversion to contact with faecal matter – the ‘yuck’ factor. Bradley Bergh of the Sustainability Institute in Stellenbosch, South Africa (and designer of a waterless urinal for women) explains: ‘Most people are used to a high degree of cleanliness at home and don’t like the idea of using a toilet that is not constantly being flushed. But this mindset belongs in the wasteful past.’

Innovative thinkers and companies are stepping up to the challenge of finding African solutions to this problem. Low-tech products popping up on the Cape Town market, for example, include Loo-Me – a foam that floats in the toilet bowl, masking the smell and sight of unflushed waste; the Lifewise Eco-Loo, a washbasin mounted directly atop a toilet cistern; and devices such as Save-A-Flush and Toilet Tank Bank, which take up space in the cistern (much like the more traditional brick) and prevent it from filling completely.

Other initiatives are more high-tech – and high-profile. The Bill & Melinda Gates Foundation runs the Reinvent the Toilet Challenge to fund research into the sustainable management of human waste. Their goal is a toilet that sterilises; produces energy, clean water and nutrients as by-products; operates off the grid; costs less than US$0.05 per user per day; promotes profitable sanitation services and businesses in poor areas; and is an ‘aspirational next-generation product that everyone will want to use’.

Thus far, ambitious projects funded by the challenge include the Nano Membrane Toilet, which vaporises water from sedimented waste by filtering it through a membrane. The recovered condensed water is pure enough for washing or irrigation, while solids are incinerated, creating energy to power the process – with enough left over to charge small devices such as mobile phones. The ash can be used as fertiliser.
Also backed by the challenge is a toilet system that disinfects liquid waste and turns solids into fuel or electricity through a biomass energy-conversion unit. And then there’s a solar toilet that concentrates sunlight to disinfect waste and produce biological charcoal (biochar) for use as fertiliser or a wood-charcoal replacement. 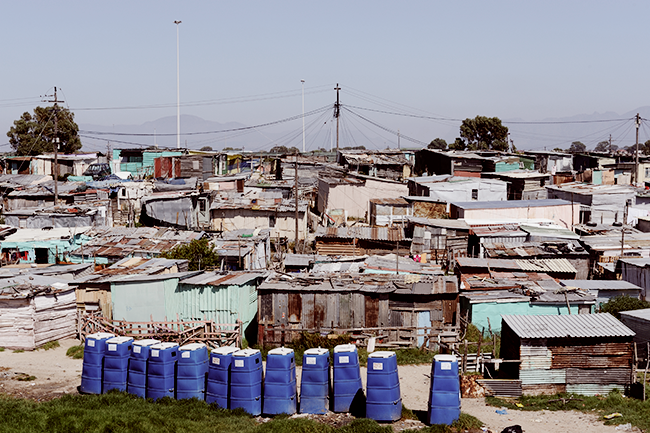 In South Africa, the WRC has funded a micro-flush toilet, the Arumloo. With a P-shaped pan that creates a gush of water to remove faeces efficiently, it uses as little as one litre of water per flush. Elsewhere, researchers have designed electric, water-saving toilets that dry-freeze faeces, eliminating odour and bacteria.

Such cutting-edge devices are impressive – but do they work in the field? ‘Many of those winning designs seem mechanically complex and wholly inappropriate in meeting the needs of the global poor,’ Alisa Keesey of GiveLove, a compost sanitation NGO, told the Guardian. At times, local authorities adopt high-maintenance systems that later turn out to be unaffordable and unsustainable.

Perhaps, the most promising approach is the simplest: composting. In a year, the average human being produces 500 litres of nutrient-filled ‘humanure’, rich in beneficial micro-organisms, nitrogen, phosphorus and potassium. It makes excellent fertiliser. And while composting toilets require some labour and training to maintain, they’re cheap and easy to build. All you need is a waste-collection container, privacy, a toilet seat and some organic material like sawdust or grass to keep the toilets free of smell and flies.

Dry systems collect toilet waste in a sealed chamber where, with added organic matter, micro-organisms break it down. The CO2 and water vapour produced is removed by ventilation.

In wet composting systems – which can also treat greywater – worms and bacteria decompose solids. Collected wastewater is pumped or drained away. After a prescribed length of storage time, the compost produced by these systems is sanitary: the high temperatures and biological processes involved destroy human pathogens. 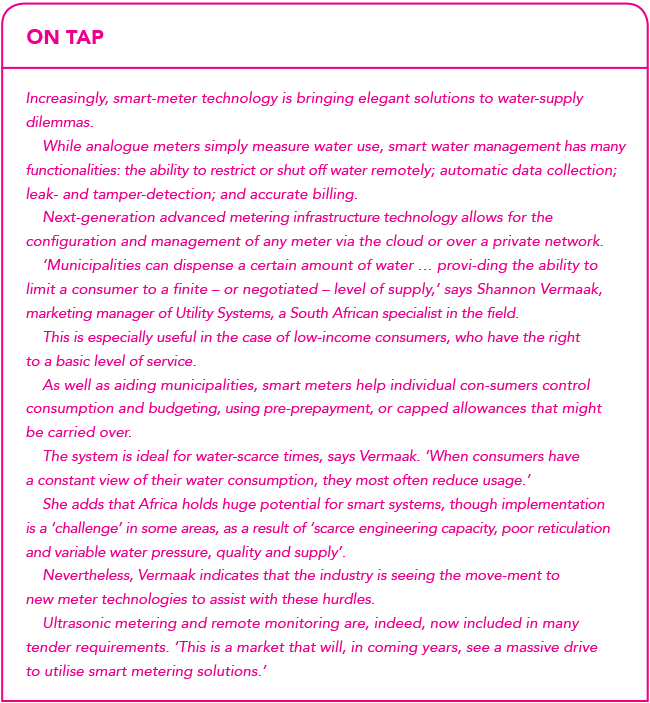 There are multiple variations on these systems. The award-winning South African Enviro Loo turns human waste into a dry, stable material without using water, electricity or chemicals – just sun and wind power. In a high-tech twist, this company also offers a cloud-based tool, Loo Solve, to schedule maintenance and give the GPS location of each installation.

In Kenya, in Nairobi’s Kibera slum, the Umande Trust runs bio-centres that collect the methane emitted from decomposing faeces. This is resold as biogas, used for cooking or to power hot showers. Also in East Africa, Sanergy installs, franchises and services Fresh Life toilets in informal settlements, transforming the waste into fertiliser – and, via a colony of black soldier flies, into animal feed.

Still more basic, a single-use, bio-degradable toilet bag has been developed by Swedish company Peepoople – it’s in use in Kenya, the DRC, South Africa and South Sudan, in areas where permanent toilet facilities are not available. Future sanitation, no doubt, will rely on a synergy between high- and low-tech solutions, and between big funding bodies and on-the-ground operations.

In South Africa, the Bill & Melinda Gates Foundation has partnered with the eThekwini municipality to test water-saving sanitation services for the poor. In rural Ndakana in the Eastern Cape, the foundation has worked with the Department of Science and Technology and the WRC to trial an off-grid, low-pour flush-toilet system.

Together, these initiatives might succeed in turning our ‘yucky’ waste into gold. As Peepoople founder Anders Wilhelmson told the Guardian: ‘Normally, faecal waste is just a very difficult waste but, properly used, it becomes an asset … You get rid of a problem and gain a possibility.’

Digital data technology, as well as barcode scanning, will be employed in... END_OF_DOCUMENT_TOKEN_TO_BE_REPLACED

Farmers in East Africa have a free, new mobile tool at their... END_OF_DOCUMENT_TOKEN_TO_BE_REPLACED