The logistics industry is under pressure. That’s according to Kate Mollett, regional director at Commvault Africa, who describes a sector that is – as she frames it – ‘increasingly a target of cybercrime and ransomware attacks; a trend that has accelerated in recent years’.

Cyberattacks are just the start of it. Gavin Kelly, CEO of the Road Freight Association in South Africa, paints an even bleaker picture of an industry facing – in his words – a ‘perfect storm’ of supply-chain blockages, unrest that took place in South Africa, the pandemic and diminishing margins.

‘No one would have thought that we would see such increases in the fuel price as we have experienced over the past six months,’ says Kelly. ‘Operating costs within the road-freight and logistics sector have continued to increase exponentially, with many of these increases coming at a time when the road-freight industry can least afford, or withstand, these shocks.’ He adds that many transport companies simply cannot keep facing the continual increase in operating costs. ‘The recent fuel [diesel] price increases have become the final “nail in the coffin” for many of our transporters.’

Yet the logistics sector (including freight, shipping and transport) is vital to economic development, and to keeping the wheels of commerce turning. This is especially true in Africa, where the World Bank estimates that intra-regional trade currently represents just 12% of total economic activity (compared to 60% in Europe and 40% in Asia). 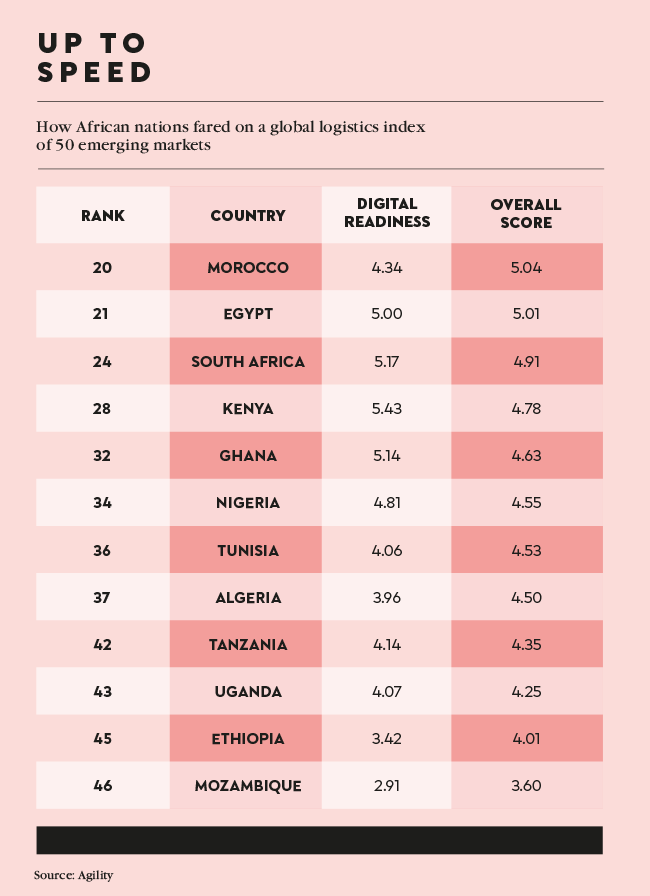 Mathilde Lebrand, economist at the World Bank’s transport global practice, believes the African Continental Free Trade Area agreement offers a unique opportunity to take that regional trade to the next level – and to boost economic growth and job creation across the continent in the process.

‘To make this happen, one key priority is to improve the efficiency of cross-border transport,’ she writes in an online post. But improving the quality of Africa’s roads is not enough, she adds. ‘In West Africa, border-crossing formalities can be slow and complicated. Many border checkpoints are located in the very heart of cities, causing traffic jams, pollution and major delays that affect both the local population and international transport operators.’

Multiple layers of bureaucratic formality (customs, police and so on) force Africa’s truck drivers to stop several times, with border-crossing times ranging from several hours to several days. ‘Given that the Dakar-Lagos corridor crosses a total of 11 international borders, the cumulative border-crossing times between Dakar and Lagos are estimated at 160 hours, which is more than half of the total travel time,’ notes Lebrand. ‘In other words, truckers travelling between major African cities on the west coast often spend more time waiting at borders than driving to their destination.’

Sameer Kumandan, MD of data-aggregation platform SearchWorks, believes that – in Africa, at least – a large part of the efficiency will come through better, faster Know Your Customer (KYC) practices. ‘No business process can be managed without necessary, up-to-date information,’ he says. ‘For the logistics industry, in which planning and co-ordinating various processes simultaneously is a prerequisite, having the right information about customers, suppliers and employees can assist in making better business decisions that have a tangible impact on the company’s bottom line.’ He adds that implementing more stringent KYC and Know Your Business measures will help the industry protect itself from what he describes as ‘dodgy, fly-by-night suppliers’, as well as from fraud and financial crime. ‘Businesses in the logistics sector can action CIPC and credit searches, verify whether individuals appear on the worldwide PEP and sanctions lists – and have all this information integrated into one convenient report,’ says Kumandan. ‘As margins become tighter, mitigating risk is a crucial component in staying competitive.’

Much of that risk is, ironically, a direct result of logistics companies having such a wealth of customer data. Commvault’s Mollett, for example, describes how the industry has increasingly become a target of cybercrime and ransomware attacks. ‘The reason for this is simple,’ she says. ‘These companies store and process a wealth of personal information that is immensely valuable, so a successful attack can be a highly profitable exercise.’

And while attacks on large multinational shipping and logistics conglomerates have made the news headlines (including the July 2021 ransomware attack on South African parastatal Transnet), Mollett emphasises that cyberthreats affect providers of all sizes across the supply chain. ‘The reality is that cybercrime does not discriminate based on size, and all organisations throughout the supply chain need to take the relevant steps to protect data and ensure the ability to recover from an attack,’ says Mollett. ‘While digital transformation can improve efficiency in the logistics sector, it can also introduce vulnerabilities if data security is not prioritised.’

She argues that the increasing number of attacks makes the protection of data essential. ‘What is arguably more important, however, is the ability to recover quickly in the event of an attack. Extended downtime and continued exposure can end up costing millions and the reputational damage can be severe, not to mention regulatory penalties associated with leaked personal information. Having an effective recovery strategy and the right tools in place is critical to protecting organisations in this vulnerable industry.’

Elsewhere, companies are harnessing the power of maturing cloud and machine learning (ML) technologies to improve their efficiencies – transporting the sector firmly into the digital age. The BMW Group, for example, recently started a two-year, EUR1.2 million research project to see how self-driving forklift trucks could be used in a production setting at its component plant in Landshut, Germany. ‘Cameras integrated into the forklifts serve as the basis for calculating autonomous runs,’ according to Ludwig Huber, BMW logistics planner. ‘They simultaneously calculate driving movements and determine co-ordinates with millimetre precision. The calculations are outsourced to a high-performance data cloud using 5G technology.’

The Robot in the Cloud project aims to move complex processors and hardware out of the vehicles themselves, and into the cloud – thereby reducing downtimes and boosting the efficiency of the entire logistics system.

Meanwhile, Singapore-based logistics platform Portcast recently migrated to Amazon Web Service’s Amazon Sagemaker to allow the prediction aspect of its ML models to scale independently of the rest of its ML infrastructure. Previously, it was training and deploying its ML models through self-hosted clusters – which was fine when Portcast was tracking just a few hundred containers at a time. But as the company grew, it found that it needed to provide arrival predictions twice a day for each of the 20 000 containers per vessel that it was monitoring… Hence the migration.

That’s the level of detail that digital-logistics technologies now provide; and it’s the level of detail that clients demand as supply chains remain under the microscope and transport costs continue to rise. Yet despite the challenges (and the scrutiny), Portcast CEO Nidhi Gupta is optimistic about the state of logistics innovation. ‘The next couple of years is just the inflection point for our industry,’ she says. ‘We anticipate 10 to 20 times growth in the coming months.’

Insights from the WEF support that. In 2022, logistics was listed among the top five most digitally mature sectors in the WEF’s Global Smart Industry Readiness Index.

‘Logistics operations have evolved significantly, mainly due to two factors,’ the report notes. ‘Firstly, the unparalleled growth of online shopping has mobilised the industry to upgrade and enhance its operations to cope with expanding requirements.

‘Secondly, the emergence of e-commerce leaders, such as Amazon, Alibaba and JD.com, has compelled traditional logistics companies to become more agile, flexible and efficient.

‘With COVID-19 further fuelling online shopping globally, digital transformation of the logistics industry is expected to accelerate in the coming years.’

African women working in the investment arena have received a US$60 million... END_OF_DOCUMENT_TOKEN_TO_BE_REPLACED

Zimbabwe is growing its status as a battery-minerals hub. The country has... END_OF_DOCUMENT_TOKEN_TO_BE_REPLACED