The Mall of Arabia in Cairo, Sandton City in Johannesburg, Nairobi’s Two Rivers… We’re all familiar with the gleaming temples of commerce, stacked with high-end stores, that are the centrepieces of our large cities’ wealthy suburbs. But in recent years, malls have been popping up in unexpected places, as developers discover pockets of opportunity in previously overlooked locations.

In the small town of Mankweng in rural Limpopo, South Africa, for example, building is under way to add some 30 new stores to Paledi Mall. It’s the mall’s second expansion in its 10-year lifespan, due to ‘the performance of the centre, demand from retailers and research into what our local shoppers want’, says Ryno de Leeuw, chief operations officer of Twin City Development, which owns the mall.

About 200 km away, in Thohoyandou, the Thavhani Mall, a regional shopping centre with almost 140 stores that opened in 2017, is also doing well – claiming this year’s top award for Rural and Small Town Development from the South African Property Owners Association.

Meanwhile, in an under-serviced sector of the Tembisa township in Gauteng, work began in April on the Mall of Tembisa, which will be McCormick Property Development’s largest project to date when it opens in late 2020. The mall will bring shopping facilities to an area that currently has few. ‘We have an extensive pipeline of over 30 centres all planned for development within the next 10 years, with the value of this pipeline being well in excess of US$1 billion,’ says MD Jason McCormick.

It’s a pattern being repeated across South Africa, and in Africa more generally. ‘East Africa is attracting a large amount of real estate interest at the moment,’ according to McCormick, and little wonder, with its ‘well-developed and well-diversified economic base, a well-developed shopping culture and retail sector’. It is also ideally located to serve Central Africa from both an industrial and a logistics standpoint.

Mozambique is another key area, ‘with the massive gas and potential oil finds off the coast, there is no doubt that off a low base this will be one of the countries to watch over the next decade’, says McCormick. The Grit Real Estate Investment Group owns or holds interests in shopping centres in Morocco, Zambia, Mozambique and Kenya, focusing on strategic nodes outside of main centres. For example, Zambia’s Mukuba Mall, one of the best-performing retail assets in the region, was the first in the city of Kitwe – previously, residents had to travel long distances to Ndola or Lusaka for formal retail shopping.

Bronwyn Corbett, founder and CEO of Grit, identifies two potential catalysts for growth in African commercial property: ‘The promulgation of real estate investment trust status in a number of countries will increase market depth considerably,’ she says. ‘A second catalyst for growth is the internet and ongoing infrastructure development that we think will have a considerable impact on logistics and warehousing.’

Instead of attracting people to the amenities of the big city, these developers are reversing the flow, taking convenience shopping to where the people are. ‘It’s economically driven,’ says architect and design consultant Mlondolozi Hempe. ‘The majority of the population that spends a lot stays in the poorest areas […] and for big business it makes sense to cater for them in their communities. It’s purely numbers driven.’

Crucially, each of the above developments is situated in what are, or what are planned to be, regional hubs at transport intersections – important for customers who are dependent on public transport. Paledi Mall, for example, is located close to several key points: the University of Limpopo, with its expanding student body; a hospital; a magistrate’s court; and a public library. The centre is also easily visible just off the R71 between Polokwane and Tzaneen. Similarly, the Mall of Tembisa will be located on the Olifantsfontein road, a major thoroughfare, and is being developed in conjunction with high-density, low-cost residential units. Thavhani Mall is at the heart of the Thavhani City mixed-use urban precinct, intended to become the economic hub of north-eastern Limpopo. ‘The fundamentals for rural malls remain the same as for metropolitan malls – access is of paramount importance,’ says Corbett. ‘In a rural environment, location is even more important to attract the right target market.’

The developers have done their homework, pinpointing unique small-town characteristics and drawcards. Paledi is only 10 km from Zion City Moria, the Zion Christian Church site. ‘Up to 5 million worshippers make their way to Moria for their annual Easter pilgrimage, which serves as a further annual boost to the mall and area’s growth,’ says De Leeuw. Recognising its customers’ trans port needs, Twin City has also upgraded the taxi rank next to the mall.

Naturally, there are challenges involved in creating malls in previously untested areas. Sustainability is a major factor, says Corbett, ‘especially with interrupted power and water supply being more common in rural areas. Provision for potable water and generator back-up are key considerations’. Tenant stores must be matched to the particular needs and tastes of the community. Typical tenants in rural malls are banks, supermarkets, and clothing and furniture retailers. ‘You need the right tenant mix [that] caters for the community,’ says Dirk Engelbrecht, CEO of Safari Investments, which is focused on retail developments in South African rural and peri-urban areas.

Safari has developed eight shopping centres, five of which are located in rural townships. ‘These communities deserve and enjoy a beautiful and safe shopping experience. It’s important to not only develop a shopping centre but to ensure that – through hands-on management – the centre is clean, safe and a pleasant environment.’

Not all who try to achieve this goal succeed. South Africa, for example, is not the easiest business environment. ‘There’s been a significant slowdown in fixed capital investment due to policy uncertainty and stagnant economic growth,’ says McCormick. ‘While the under-serviced areas are growing at unprecedented rates the remainder of the South African landscape is under huge pressure. This will push local developers and asset managers back out into the African continent.’

Other obstacles are related to communities’ lack of economic opportunities. In South Africa, ‘we’ve experienced challenges like community protest and unrest’, says Engelbrecht. ‘These protest actions are usually politically driven and I think a direct consequence of the high unemployment rate.’ He adds that certain projects have been delayed by eight to 12 months because of this kind of political turbulence.

Such problems can arise if the community feels shut out of a development. ‘Local communities for the most part are happy that some form of development comes their way,’ says Hempe. However, he adds, often economic opportunities are ones that ‘they create themselves on the perimeter’ of a mall, such as starting their own small informal businesses. Some observers, he says, ‘question if this is caused by the lack of integration of these spaces in the local communities’.

Hempe is critical of the fact that many township malls are built without inclusive procurement procedures that could help uplift local communities – for example, he suggests a percentage of the fresh produce sold could be sourced from the region. A rental arrangement, subsidised by local municipalities, might favour local entrepreneurs who want to open up shops. ‘These are some of the solutions that can be put in place to increase the economy, leading to more people getting work and then resulting in safer, sustainable townships.’

Overall, Hempe is not convinced that the trend towards township and rural malls is here to stay. ‘I believe this market will soon plateau,’ he says, partly because township residents are starting their own formal businesses selling quality product. He sees a move to decentralisation – or perhaps a different kind of centralisation, where ‘there is an opportunity to gather all small businesses in a township and provide them with a customised version of a small-scale mall that could be the next space for growth’. 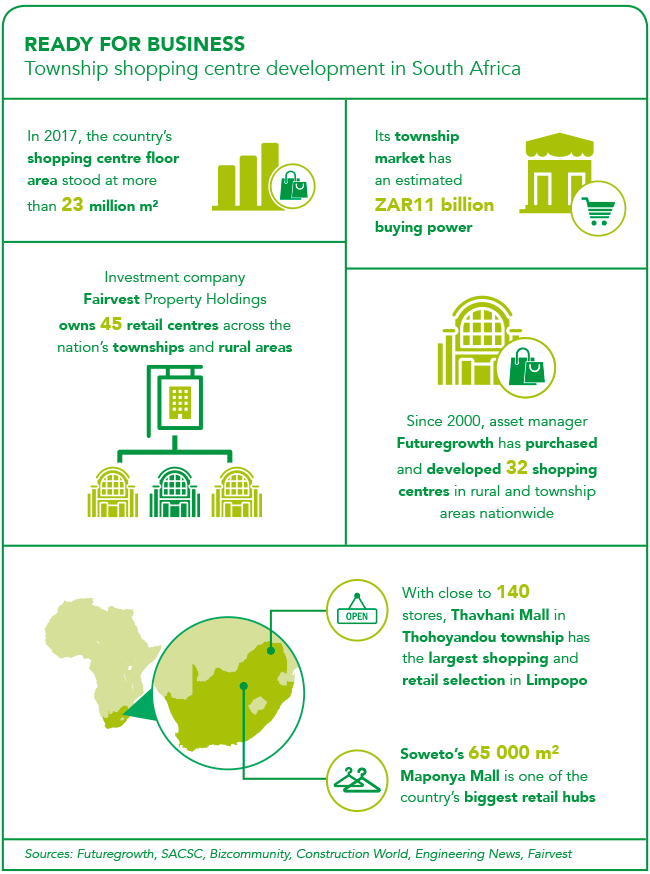 Nonetheless, malls can be transformative. ‘Building a large mall can have big benefits for a small rural community and meaningful impacts on employment, retail services and their local economy,’ according to Itumeleng Mothibeli, recently appointed MD of Vukile Property Fund, part-owner and developer of Thavhani Mall. Local malls save residents transport money, and may also bring corporate and social upliftment projects to the area via the larger commercial tenants.

Shoppers get attached, too. Engelbrecht relates how Safari’s Denlyn Centre in Mamelodi, Tshwane, was initially named Mamelodi Crossing, but the community started talking of Denlyn (their own ‘Menlyn’). As a result, the developers changed the name. ‘The communities really make these centres their own,’ he says.

McCormick agrees. The benefits are not only economic, he argues, but include fostering a sense of self-worth and community value. ‘We are yet to come across a community that has not responded with pride and gratitude to the developments that we have brought into their areas,’ he says. ‘It is this response that keeps fuelling our fire to do more and more into the future.’

Ghana has opened its first farmer-owned cocoa fermentation centre. The facility, at... END_OF_DOCUMENT_TOKEN_TO_BE_REPLACED

An initiative supporting efforts to ensure the continuation of education amid the coronavirus... END_OF_DOCUMENT_TOKEN_TO_BE_REPLACED

The Namibian government is rolling out a NAD500 million COVID-19 loan scheme... END_OF_DOCUMENT_TOKEN_TO_BE_REPLACED