If the forecasts prove accurate, international arrivals to sub-Saharan African destinations should reach 25 million trips a year by 2022. This translates to an average of 68 000 per day. It’s expected that this glut of arrivals will be spurred by increased interest from overseas visitors. Competitive rates compared to other destinations with similar offers will be a major drawcard, reports Euromonitor International. Increased direct air connectivity to and from major overseas markets will also be a major contributing factor. That said, what are the key challenges facing the tourism and travel industry in South Africa and sub-Saharan Africa?

‘Red tape must be seen within the broader context of the unequal economic scales between the different countries,’ says Mmatšatši Ramawela, CEO of the Tourism Business Council of South Africa (TBCSA). ‘There’s definitely been a lot of conversation about how to get around some of the challenges – initiatives such as the KAZA [Kavango-Zambezi] visa have been implemented between Zambia and Zimbabwe.’ Angola, Botswana and Namibia are to follow. ‘There’s talk of the introduction of a UniVisa in the Southern African Development Community and in South Africa the Department of Home Affairs will soon be piloting their e-visa system,’ says Ramawela.

The first phase of the electronic visa system is planned for March 2019, and is set to boost tourism with quicker turnaround times for travel documentation. According to Ramawela, further developments include a Free Trade Agreement that was signed at a recent meeting of the AU, and ‘while we are yet to see how this will impact tourism, any move towards unlocking trade barriers between countries in the region will certainly be good for the industry’. 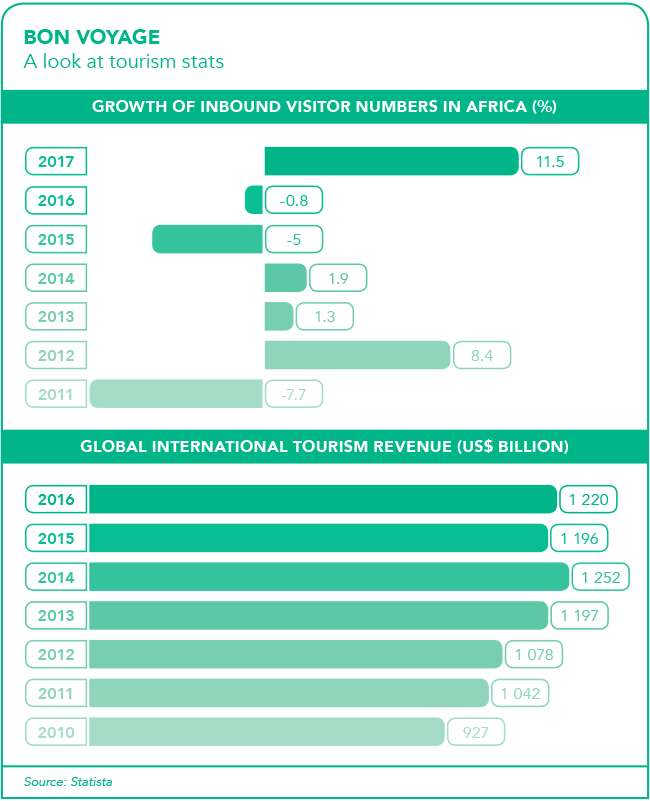 Travel and tourism contributed 8.9% of total GDP in South Africa compared with 7.1% for sub-Saharan Africa and 10.4% worldwide in 2017, according to the World Travel and Tourism Council (WTTC). Research director Rochelle Turner says that part of the reason for these statistics is that South Africa is a large well-developed economy with up-to-date airports and route networks in the aviation space that are far more developed than most other sub-Saharan countries. Also South Africa has recognised the benefits of trade accruing through systems that support travel and tourism, and there are comparatively higher levels of income and employment. But, she explains, visa applications are subject to many restrictions and red tape. ‘Certain routes need development and there are regulation difficulties that prevent free movement.’

Opening up Africa’s skies could be a huge coup for sub-Saharan travel especially seeing that travellers from African states often need to fly to Europe or the Middle East first to get to destinations within other African countries.

These bizarre routing systems are set to change though, if a new move from the AU proves successful. It recently launched the Single African Air Transport Market, with the aim of transforming intra-African air travel with lower prices and increased connectivity. ‘Of the 23 states who have committed to this, there is liberalism instead of protectionism,’ says Turner. Another 32 AU members are still to come on board.

Christy Tawii, Euromonitor International senior analyst, concurs: ‘Increasing flight paths between regional hubs would contribute to a more open Africa. With the strong growth in GDP in many African coun­tries, and a population that is set to grow from 1.2 billion to 1.7 billion by 2030 in the AU member states, there is good potential for increased business and leisure travel. African tourist boards will need to shift their focus though, as many tend to concentrate on attracting European and North American travellers instead of their neighbours.’

Additionally, the African continent, with an open visa plan could attract prosperity and future growth through investors, entrepreneurship and diversified economies if the barriers to travel were actively broken down. The AfDB reports that they are trying to drive a continental visa policy reform programme for all of Africa by removing many of the challenges and procedures facing people when they travel. ‘We want to make sure there is reciprocity on visa issuance across countries and we want to promote talent mobility all across Africa.’

The AfDB’s latest Visa Openness Index report shows that residents in African states currently need visas, before travelling, for 54% of the other countries on the continent and they can get visas on arrival for 24%. Of all the nations, the Seychelles, which offers visa-free access for all Africans, remains the top performer on visa openness. Visitors to Mauritius from African countries require either no visa, or a visa is issued on arrival. According to the UN’s World Tourism Organisation in its World Tourism Barometer, international arrivals in Mauritius grew by 7% in 2017, with a total of 1.3 million visitors, 112 129 of whom were South African. This total number is anticipated to grow by 4% to 5% this year.

Typically, factors influencing business travel further, include retail purchases. This is evident particularly in well-established markets such as South Africa where, as Tawii says, ‘modern retailing penetration is close to 70%’. She adds that ‘we all want to see seamless travel boosting intra-Africa trade and integration, or even visas upon entry for more African countries, to offer great opportunities to the travel industry.’

The AU recently outlined its plans towards seamless borders in its Agenda 2063 policy document, which is a strategic framework for the socio-economic transformation of the continent over the next 50 years. It builds on, and seeks to accelerate the implementation of past and existing initiatives for growth and sustainable development.

To this end, the AU launched the African passport in 2016, allowing holders to travel visa-free to all 55 member states. However, Tawii argues that despite this, the AfDB research shows that in 2016, Africans still needed a visa to travel to all but 20% of the other countries on the continent.

Commenting on these plans, Tawii notes that although they would greatly benefit the region and the travel industry, she believes the proposals come with challenges, and much of the workings are still unclear. ‘There are major discrepancies in GDP per country, resulting in fears of one-way migration to richer countries. By 2030, for example, South Africa’s GDP per capita is expected to be 10 times higher than neighbouring Zimbabwe.’ Also, while the distribution of the African passport is uncertain, it seems that they are only for heads of state, rather than ordinary citizens.

The TBCSA says that economic growth means a greater level of investment in the economy, which should translate to job creation. This invariably means business and consumers will have some extra cash in their pockets to be able to travel.

Furthermore, the latest figures released by the WTTC show that a total of 1.5 million people were employed in the tourism sector in South Africa, while 17.2 million people were dependent on travel and tourism based employment in sub-Saharan Africa in 2017. And these numbers are expected to grow by 3% annually from 2018 for the next 10 years.

Despite the challenges, as demand for tourism increases, so too will it bring opportunities for linking with other sectors in different economies. As a result, it is hoped that positive social, cultural, and environmental influences will put pressure on some of the world’s poorest communities to develop and evolve.

Côte d’Ivoire has become the second country to take delivery of COVID-19... END_OF_DOCUMENT_TOKEN_TO_BE_REPLACED

Nigeria is set to commence work this quarter on a complete overhaul... END_OF_DOCUMENT_TOKEN_TO_BE_REPLACED

Burundi and Rwanda are going ahead with plans to build a multi-purpose... END_OF_DOCUMENT_TOKEN_TO_BE_REPLACED