South Africa has a large and mature shopping centre market, with approximately 2 000 shopping centres across the country, covering an estimated 23 million m2 of floor space. According to the South African Council of Shopping Centres (SACSC), it has the sixth-highest number of shopping centres of any country in the world. New developments are opening regularly too, with one of the most recent also being the largest single-phase development in the country to date – Gauteng’s Mall of Africa.

The 130 000 m2 Mall of Africa, which has a value of ZAR4.9 billion, is owned by leading South African real-estate capital growth fund Attacq Ltd, which holds 80%, and developer Atterbury Property Developments owns the remaining 20%. Notwithstanding its mammoth size, provision was already made in its planning for a future expansion of 25 000 m2.

CEO of Attacq Morné Wilken calls Mall of Africa the ‘jewel in the Attacq crown’, and says there was a ‘huge gap in the market’ as far as the Waterfall area was concerned. He adds that the development will act as a catalyst for economic activity in the area, with a potential annual turnover in the region of ZAR4 billion for the retailers.

‘The nature and stature of the mall meets the identified need and was very much driven by tenant demand,’ he says. ‘The stature secures the future of the mall and ensures that it will dominate in the region.’

According to Wilken, property is a long-term asset, especially the right retail mall in the right catchment area, and he notes that Attacq’s strategy is based on long-term sustainable capital growth.

‘The market will go through cycles and, given Attacq’s long-term view, it still makes sense to develop an asset like Mall of Africa. Mall of Africa-type developments do not come around that often,’ he says.

While he says that the space for another super-regional mall is ‘very limited’, he believes there are still opportunities for convenience retail as well as the redevelopment of existing malls in good catchment areas. Indeed, Gauteng will soon be getting another ‘mega-mall’, with ground already having been broken in Fourways, and the development scheduled for completion during 2018.

Being built through Accelerate Property Fund, in partnership with the Fourways Precinct, the huge endeavour will see the expansion of Fourways Mall as it joins with other centres in the area to cover a total of 175 000 m2 under one roof.

Sub-Saharan Africa is experiencing noteworthy growth in modern mall development, largely owing to the growth of its consumer markets

This will make it Gauteng’s largest mall – outstripping both the Mall of Africa and Sandton City (128 000 m2) – South Africa’s second-largest mall. Durban’s Gateway, at 220 000 m2, remains the largest.

COO of Accelerate Property Fund Andrew Costa explains the need for such expansion: ‘Densification in the Fourways area keeps on rising, with increasing residential developments within the node increasing retail demand, despite current economic circumstances.’

He adds that the Fourways area is one of the most anticipated retail property development nodes in South Africa. ‘It boasts one of the fastest-growing commercial and residential hubs in northern Johannesburg. Accelerate is therefore uniquely positioned within the retail sector in South Africa and the node provides for considerable growth in the future.’

With regard to whether or not the market will ever reach saturation point, Wilken says this is possible, as there are only a certain number of shoppers. ‘If retail space keeps growing, there will be some casualties, but again, it will all depend on market understanding and malls meeting the demand of their specific target audience,’ he says. ‘Weaker retail assets might struggle in future and eventually be replaced by better-built and better-serviced assets.’

Robert Broll, retail leasing consultant at Broll Property Group, says he does not think that South Africa can accommodate too many more super-regional malls. The Broll group is a leading property services company in sub-Saharan Africa that is active in 16 countries. It focuses on, among other things, property management, commercial, industrial and retail leasing, and facilities management.

‘When you talk to South African retailers, one of first things they speak of is rate of cannibalisation. We’re finding a lot of the existing super-regionals are upgrading and extending to counteract the new malls going up,’ says Broll.

Mega-malls aside, everyone seems to agree that there is still plenty of room for mall development in South Africa and beyond. ‘There is still a fair amount of rural development taking place,’ says Broll. ‘South African developers have also started looking to surrounding countries. We’ve noticed a trend in the past 18 months, where South African retailers have been buying brands overseas, diversifying. Likewise, South African landlords and developers are buying elsewhere – in Africa, Australia, even Eastern Europe.’

Property developer Safari Investments has always had a strong focus on previously disadvantaged communities and under-resourced areas. According to Fanus Kruger, Safari’s investor relations officer, the company identified early on that there was a need in this segment, and thus great opportunity. ‘There is an oversupply in the more affluent areas and a bit of cannibalism happening in the more traditional suburbs,’ he says. ‘I think that market is getting to the stage where it’s difficult to add value. Our scope is more challenging.’ But it seems it is also more stable. ‘When 2008 struck and in the national statistics you could see a lot of malls were struggling, ours were not, because the buyers were cash buyers, not luxury.’

Safari’s niche focus has served it well: what started in the 1990s as a small company comprising private investors is now a JSE-listed entity with 19 properties in its portfolio, totalling just shy of 154 000 m2 of gross lettable area and valued at ZAR2.2 billion. The company’s first development remains its largest – Denlyn Shopping Centre in Mamelodi, Gauteng, with 42 200 m2 of floor space.

Kruger says the company is bullish about the future, but won’t be venturing too far into Africa at this point. While the firm currently has one mixed-use development under way in Namibia, this is its only African venture for now.

‘There is potential in Africa, and there are certain areas we have identified, but it’s early days and we want to ensure the sustainability of what we do. We’ll continue to focus within our borders for the time being.’

As a whole, sub-Saharan Africa is experiencing noteworthy growth in modern mall development, largely owing to the growth of its consumer markets, as well as its rapidly expanding urban populations and metropolitan areas. 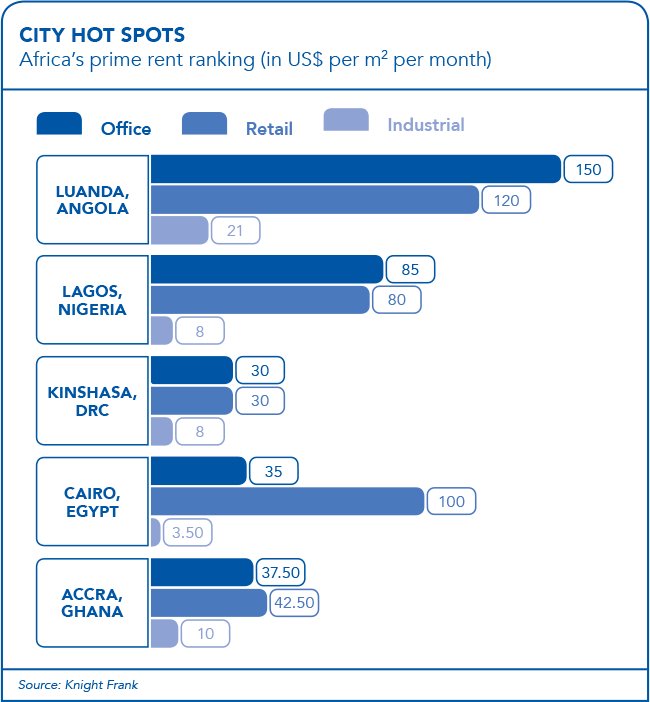 According to Knight Frank, Windhoek in Namibia and Gaborone in Botswana are the next largest markets by floor space (260 000 m2 and 247 000 m2 respectively), followed by Kampala, Uganda at 182 000 m2 and Harare, Zimbabwe at 178 000 m2. It is interesting to note that mega-cities such as Lagos and Kinshasa – despite their immense size – have much less floor space for retail than the aforementioned Southern African cities, perhaps an indication of how much growth is still needed in those retail markets.

Broll believes there is ‘great potential’ for retail developments in Africa. ‘It’s not just the larger regional malls that people are looking at,’ he says. ‘Some are looking at smaller-format convenience centres of between 7 000 m2 and 9 000 m2. There are also plenty of projects by local developers in countries like Ghana, Namibia, Mozambique and Zambia. So there continues to be a strong pipeline of proposed new retail developments across the continent.’

One of the main factors driving ongoing development is demand. ‘In Africa you’ve got an emerging middle class with a relatively small amount of formal retail space and opportunities,’ says Broll.

‘Then you’ve got South African and international retailers who want to penetrate these new markets. There’s a clear demand for quality retail space and developers are coming to the table and providing that.’

Bronwyn Corbett, CEO of listed Mara Delta concurs. ‘When it comes to retail centres in Africa, we are very particular,’ she says. Mara Delta is the largest pan-African-focused real estate fund operating on the continent outside of South Africa, with assets in Zambia, Morocco, Kenya, Mozambique and Nigeria.

‘We do not see scope for malls larger than around 15 000 m2 at this stage and fundamentals such as dominance, local expertise and tenant mix remain key.’ Mara Delta recently acquired interests in three large retail centres in Zambia from Rockcastle Global Real Estate Company.

‘These centres have proven very defensive, notwithstanding the international commodity market slump. Vacancies are zero, and there is strong demand from new tenants. We believe it is because these centres cater for shoppers’ everyday needs with minimal focus on luxury brands,’ she says.

Wilken agrees that numerous possibilities exist on the continent. ‘Africa’s facing a number of headwinds at the moment but the long-term fundamentals remain, with high rates of urbanisation and higher-than-average growth rates,’ he says.

The retail segment is certainly a thriving sector of the property-development industry – one that is unlikely to see any halt to its acceleration anytime soon.

Ghana has opened its first farmer-owned cocoa fermentation centre. The facility, at... END_OF_DOCUMENT_TOKEN_TO_BE_REPLACED

An initiative supporting efforts to ensure the continuation of education amid the coronavirus... END_OF_DOCUMENT_TOKEN_TO_BE_REPLACED

The Namibian government is rolling out a NAD500 million COVID-19 loan scheme... END_OF_DOCUMENT_TOKEN_TO_BE_REPLACED