Wolfsburg, Maranello, Detroit… Addis Ababa? It’s easy enough to spot the odd one out in that list – but between Chinese investment and Ethiopian ambition, a landlocked Horn of Africa underdog may soon become a new global car manufacturing hotspot.

‘The aim is to become a leading manufacturing hub in Africa,’ Ethiopian State Minister for Industry Tadesse Haile recently went on record as saying. ‘We want to become the top producer of cars on the continent in 15 or 20 years.’

As ambitious or unlikely as this may sound now, there’s every chance Ethiopia will reach that goal. A look at the current state of vehicle manufacturing, and sales in sub-Saharan Africa shows why.

As it stands, Ethiopia would have to surpass the continent’s current auto giants, South Africa (which builds more than 600 000 fully manufactured vehicles a year) and Morocco (which, thanks to its geographic proximity to the European market, makes about 200 000).

However, only 35% of the parts used to make vehicles in South Africa are produced locally. ‘One of the things that we are going to be doing is sit with the industry; understand their plans,’ Gauteng Economic Development MEC Lebogang Maile recently told eNCA. ‘Already we know BMW is going to be investing ZAR5 billion. But what is the implication, what is the value chain, what are the things that are needed in terms of the components and what are those things that could be done locally?’

The good news for Maile – and the bad news for Ethiopia – is that South Africa’s car industry has drawn investments of more than ZAR25 billion over the past five years. Along with BMW’s investment in its Rosslyn plant outside Pretoria, the Volkswagen Group has set aside ZAR4.5 billion for new models and infrastructure at its Uitenhage factory, while Volvo is investing ZAR60 million in a regional parts and distribution centre in Benoni.

Ford Motor Company of Southern Africa also recently announced a ZAR2.5 billion expansion project for its Silverton plant in Pretoria, to produce the all-new Ford Everest range. That’s expected to create about 1 200 new jobs, prompting Ford executive vice-president Jim Farley to say: ‘When your plant gets a new vehicle, it’s a really big deal and it’s a solid vote of confidence in our team and in South Africa as a whole.’

In May, Toyota South Africa Motors (TSAM) announced a ZAR6.1 billion investment in its new Toyota Hilux and Fortuner manufacturing plant in Prospecton, Durban – with Toyota’s suppliers investing in excess of ZAR1.7 billion as a direct result.

At the launch, TSAM president and CEO Andrew Kirby said: ‘This latest announcement gives evidence of a company that is … committed to South Africa by strategically investing in the people, tools and equipment to produce cars and commercial vehicles of world-class standard – that are not only destined for the domestic market, but will also fly our flag high on the international stage, thanks to a robust export plan.’

In an op-ed for AllAfrica, South Africa’s Minister of Trade and Industry Rob Davies wrote that the government had set a target of 1.2 million cars to be produced in South Africa by 2020. ‘Every investment brings us closer to that target,’ he wrote. 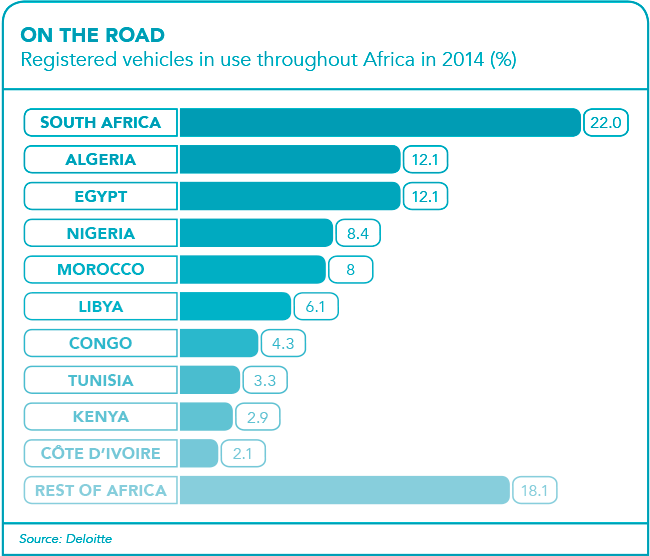 Ethiopia currently produces around 8 000 vehicles a year for the local market, of which about 2 000 are cars

Even a 50% increase (bringing the total to 900 000 vehicles a year) is ‘feasible’, National Association of Automobile Manufacturers of South Africa director Nico Vermeulen told Bloomberg. ‘We’ve factored into that estimate or target the possibility of new entrants coming into this market.’

Speaking at the Toyota event in Durban, South Africa’s President Jacob Zuma said that the government continues to support the auto sector because the results are visible. ‘The South African motor industry has been one of the key successes of government’s economic policies. Since 1995, exports have more than doubled, rising from just over 240 000 units to 615 000 vehicles in 2015,’ he said.

‘Work towards the development of a new Automotive Plan to cover the period 2020 to 2035 has … commenced with a target completion date of March 2017.

‘We thus see a brighter future for our automotive industry in our country, and look forward to growth and continued success for this sector.

‘We support the automotive sector also because it is part of the important efforts of growing our manufacturing sector. Manufacturing is far more important than the 15% it contributes to the economy. It forms the basis of a modern economy.’

Zuma’s last line – ‘the basis of a modern economy’ – reveals exactly why Ethiopia is so keen to industrialise and why the mostly agrarian, landlocked country has set its sights on overtaking South Africa. It’ll have to pass a few other countries on the way. Mozambique, for example, is slowly creeping out of the ashes of the Mabor tyre company bankruptcy, with investment by China Tong Jian Investment Company helping to set up domestic automaker Matchedje Motor. In 2014, its first car rolled off the assembly line, with further plans to make 30 000 vehicles a year.

Zimbabwe signed a deal last year with Italy’s El Badaoui Group to design, manufacture and export an entirely Zimbabwean-made car. But they face a tough task: Zimbabwe’s only car-assembly plant – Willowvale Mazda Motor Industries – stopped operating in 2012 when production dropped to below 4 000 units.

Nigeria currently imports almost all of its vehicles and aims to increase its local automotive manufacturing capacity to 80% by 2023. Seeking to cut imports and diversify its oil-driven economy, Nigeria announced plans to assemble 500 000 vehicles per year over the next five years (up from 10 000 units in 2014), with 36 companies being awarded production licences, and a raft of tax incentives introduced. Global companies including Nissan, Ford and Volkswagen are already making vehicles with local partners.

So where does this leave Ethiopia – and, given the scale of its ambitions, why should anyone take it seriously? ‘There is a lot of potential for growth,’ Ma Qun, deputy manager of China’s Lifan auto group in Ethiopia, told Reuters. The numbers back that up. Ethiopia currently produces around 8 000 vehicles a year for the local market, of which about 2 000 are cars. Investors and auto executives believe that the country has capacity to manufacture far more.

The pieces are nearly in place. Industrial zones are already being built around Addis Ababa and Mekelle, where Chinese partners are helping Ethiopian firms to assemble vehicle kits. (Ethiopia built in excess of 38 000 assembled cars in 2015 – a more than 50% increase from the previous year.) A Chinese-built electrified railway will soon link Ethiopia to Djibouti, providing cheap and easy access to the Indian Ocean and the Asian export market.

A new report by consultancy Deloitte confirms that Ethiopia, Nigeria and Kenya have the capability to challenge South Africa’s dominance of the vehicle-manufacturing market, all having either the population or the economic strength required, and that Africa has enormous potential for growth in vehicle sales. It estimates that there are 44 vehicles for every 1 000 African inhabitants, compared to the global average of 180. Of the 90 million new vehicle sales worldwide in 2015, 1.55 million were in Africa. Of those, 80% were in South Africa, Egypt, Algeria and Morocco.

‘While Africa’s automotive market is still underdeveloped, Deloitte recognises the potential of the automotive industry in Africa and foresees room for growth across the automotive value chain, including vehicle sales, after-sales, vehicle assembly and production,’ the report states.

‘Deloitte regards the continent as the final frontier for the global automotive industry,’ and ‘although seen as one of the world’s poorest countries, with a per capita income of only US$702 in 2015’, one country is ‘arguably … a relatively untapped investment opportunity in Eastern Africa, especially in the manufacturing sector’. That country is Ethiopia.

Digital data technology, as well as barcode scanning, will be employed in... END_OF_DOCUMENT_TOKEN_TO_BE_REPLACED

Farmers in East Africa have a free, new mobile tool at their... END_OF_DOCUMENT_TOKEN_TO_BE_REPLACED