Oceans are vital to the African economy. The continent commands vast, relatively pristine maritime holdings of about 13 million km2 – ‘another Africa under the sea’, as Carlos Lopes, then executive secretary of the UN Economic Commission for Africa, said in 2016. Seventy percent of the continent’s countries are coastal; more than 90% of its imports and exports travel by sea, and its ports are strategically vital for global trade. It’s been estimated that by 2020, the annual economic value of African maritime and related activities may reach EUR2.5 trillion.

While fishing constitutes a large part of this wealth – providing food security for more than 200 million Africans and income for 10 million – it is by no means all. Other major sectors of the ocean-based economy include aqua­cul­ture, tourism, transport and mining.

Port develo­pment is an important growth area: growing industrialisation means Africa’s maritime infrastructure must modernise to link the continent to national, regional and global networks. And lastly, renewable ocean-generated energy is set to be huge: the Inter-national Energy Agency estimates that this technology could ultimately help meet the world’s total energy demands.

Understandably, hopes are high for the transformative potential of the Blue Economy – a buzzword in African policy and conser­vation circles over the past 10 years. The AU has even dubbed it the ‘New Frontier of African Renaissance’, and it’s enshrined in key development and policy documents, such as Agenda 2063 and the AU’s 2050 African Integrated Maritime Strategy. After pioneering work by Seychelles and Kenya, many African governments have launched dedicated Blue Economy initiatives. The ocean economy is central to Namibia’s NDP, for example.

With its extensive coastline, South Africa, too, is investing heavily in the maritime eco­nomy, through the Department of Environ­mental Affairs’ (DEA) Oceans Economy Lab. This forms part of Operation Phakisa – a cross-sector programme launched in 2014 to help fast-track economic growth and job creation. The DEA focuses on four core areas – marine transport and manufacturing; offshore oil and gas exploration; aquaculture; and marine protection services and ocean governance.

According to WWF estimates, about a third of the South African economy is made up of ocean-related goods and services. DEA Minister Edna Molewa has stated that ocean-related industries could potentially contribute more than ZAR177 billion to the country’s GDP by 2033, and massively contribute to growth in employment. ‘The Blue Economy could see our sustainable employment goal increase from 800 000 to up to 1 million.’

In June this year, the Africa Blue Economy Forum 2018 held its inaugural conference, bringing together government ministers, business leaders, oceanographers and environmental organisations. The complexity of the issues is reflected in the diversity of topics on the agenda, from climate change to piracy, governance to aquaculture.

Perhaps because of this complexity, stake-holders have struggled to come up with a universally accepted definition of the Blue Economy. As Progress Namibia (a sustaina­bility advisory company) puts it, for some it means ‘the use of the sea and its resources for sustainable economic development. For others, it simply refers to any economic activity in the maritime sector, whether sustainable or not’.

In the rush to take advantage of this ocean wealth, some fear that other priorities might be sidelined – environmental concerns such as plastics pollution and overfishing. At a recent South African Institute of International Affairs (SAIIA) workshop, some even questioned the advisability of the Oceans Economy Lab falling under the DEA, as the economic growth goals of Operation Phakisa may in fact be in conflict with the department’s environmental mission. And, of course, there are separate questions of social equity and justice. 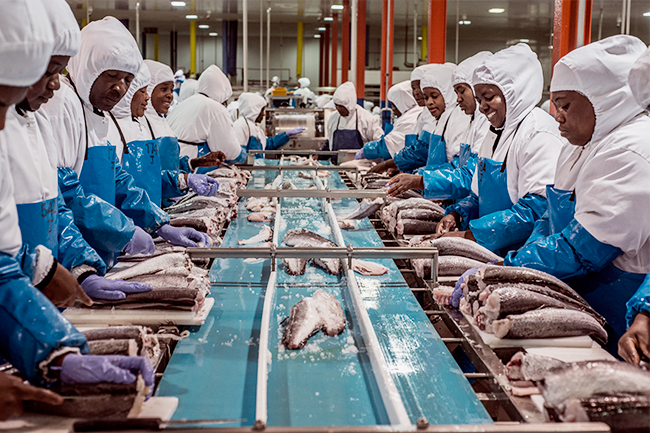 The SAIIA conference, for example, drew attention to problems of human trafficking and human rights abuses on seagoing vessels; and the impact of illegal fishing on local econo­mies. ‘Social well-being and sustainable livelihoods, rather than purely economic indi­cators, must be considered… Efforts focused on community empowerment, benefit sharing and an enhanced voice for marginalised groups in policy processes are important for the development of inclusive Blue Economies,’ writes Alex Benkenstein, head of SAIIA‘s governance of Africa’s resources programme. Or more simply, it’s important to ask: ‘Blue growth for whom?’

Namibia offers a good example of this, where different elements of a supposed Blue Economy come into direct conflict with each other – in this case, conservationists, fisheries and mining interests. Namibia’s coast holds uniquely rich seabed deposits of marine phosphate, and advances in mining technology mean that these deposits are now accessible. Seabed mining has been a key element of Blue Economy discussion in the country. However, these largely untested new mining techniques are potentially extremely destructive to fish breeding grounds. This has concerned conservation groups and the fishing industry, and the granting of licences to mining outfits has been blocked in the courts.

Similar concerns dog South African mining initiatives. Since 2012, the Department of Mineral Resources has granted rights to several private companies to prospect for sedimentary phosphate in an area covering 10% of South Africa’s ocean territory – which also contains endangered ecosystems and crucial fishing grounds, including South Africa’s only Marine Stewardship Council (MSC)-accredited fishery, according to the Safeguard our Seabed Coalition. (The coalition is a WWF Nedbank Green Trust-funded project created to pursue a mora­torium on marine phosphate mining in South Africa.)

The country’s Ocean Economy initiative also has plans to fast-track marine petroleum and mineral extraction. Currently, 98% of South Africa’s marine-exclusive economic zone has been leased for offshore oil and gas exploration. There are plans for the drilling of 30 wells in the next 10 years, and the development of a gas pipeline network. Rights have also recently been granted for coastal and offshore mineral sand mining and unconventional gas exploration such as offshore fracking, according to conservation group BirdLife South Africa. The potential environmental downside of these initiatives is clear. 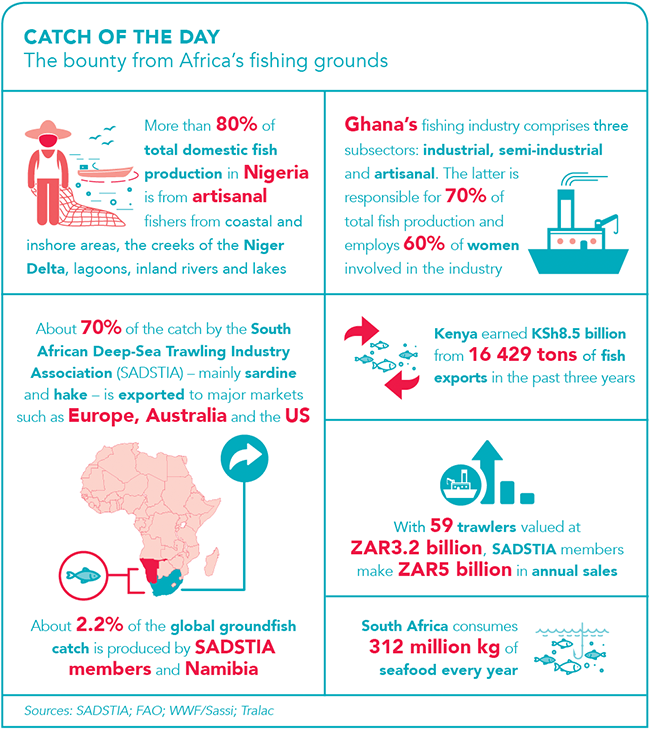 That said, most large-scale Blue Economy initiatives do indeed emphasise sustainability. The UN’s Sustainable Development Goal 14, namely Life Below Water, promises to ‘sustainably manage and protect marine and coastal ecosystems to avoid significant adverse impacts, including by strengthening their resilience, and take action for their restoration in order to achieve healthy and productive oceans’.

Encouragingly, there is also increasing co-operation between governments, industry and conservation bodies, working together to safeguard the ocean economy of which they are beneficiaries. The South African hake trawl fishery, for example, has gained a ‘sustainable and well-managed’ certification from the MSC; while the country recently created 22 new marine protected areas, which allow endangered fish populations to breed.

The Responsible Fisheries Alliance, whose members include fishing industry titans I&J, Sea Harvest, Oceana and Viking, advocates for responsible practices in the commercial fishing sector. They report significant improvement in reducing bycatch and seabird mortalities, as well as empowering fishing communities. Members of the South African Deep-Sea Trawling Industry Association have voluntarily agreed to ‘ring fence’ a small area of territorial waters in which to trawl.

Other advances also show promise for controlling rampant illegal fishing, which damages local African economies and maritime ecosystems. Several initiatives active in African waters combine satellite technology and fishing vessel data to detect and combat illegal, unregulated and unreported fishing. The FISH-i Africa project involves an alliance of eight East African coastal countries, while Project Eyes on the Seas is designed to be a cost-effective tool for governments around the world.

Ideally, a functional and flourishing maritime economy is one that takes all these factors into consideration – economic growth; the health of marine resources; social stability and welfare; and clean, renewable technology. After all, there is no point in pushing to expand industries that ultimately damage the sea that nourishes them.

‘Oceans are critical to sustaining the Earth’s life-support systems, and the billions of people who are dependent on the oceans for livelihoods, food security and economic development,’ says Benkenstein.

Managed wisely, the continent’s burgeoning Blue Economy has the power to transform the region, creating wealth for generations to come.

More than 3 000 women leaders of farming co-operatives in Rwanda are... END_OF_DOCUMENT_TOKEN_TO_BE_REPLACED

A 13 km high-voltage power line being built in Zimbabwe is the... END_OF_DOCUMENT_TOKEN_TO_BE_REPLACED

Small and medium-sized businesses in Ghana that are struggling to adapt to... END_OF_DOCUMENT_TOKEN_TO_BE_REPLACED