According to activist group Equal Education, 41.7% of South African Grade10 pupils drop out of school before their matric year. One of the main reasons – the absence of a solid early schooling foundation. Trialogue, a consultancy that focuses on corporate responsibility issues, notes that education continues to receive the largest proportion of corporate social investment (CSI) in South Africa – some 48% in 2017.

Samsung believes that technology is a powerful tool for social change, especially when it comes to education. Indeed, the electronics company has said that the future of education is in technology, and has expressed its commitment to improving access to education for South African children through its Smart School initiative. ‘Samsung promotes learning and is addressing South Africa’s education challenges by bringing new and immersive digital learning experiences into the classroom,’ says Hlubi Shivanda, director: business innovation group and corporate affairs at the company. ‘Smart classrooms have shown to improve student engagement and teacher empowerment, combining easy-to-use devices and dynamic content.’

The Smart School, which uses e-boards (electronic, interactive LCD whiteboards), has three components: an interactive management solution that allows teachers to deliver content to students, share screens, check student progress and conduct group activities; a learning management system that provides educational material and content such as e-textbooks and learning apps; and a student information system that helps teachers track an individual learner’s progress, attendance and other information. The initiative supports at least 3 000 schools globally and has made a difference to more than 1.4 million learners.

One of the newest smart classrooms in South Africa was recently unveiled at Michael Zulu Primary School in Brakpan. Takalani Netshitenzhe, chief officer: corporate affairs for Vodacom Group, says that for the company, CSI means investing in and empowering disadvantaged communities to improve their quality of life. ‘Vodacom believes in using our innovative technology to address societal challenges aligning to the Sustainable Development Goals [SDGs] and national development plan,’ she says. ‘Giving back to communities contributes to the eradication of socio-development challenges, which include breaking the cycle of poverty; supporting the journey towards accessible, quality education; and dealing with many social issues faced by the comm-unities within which corporates operate.’

The company’s efforts are co-ordinated through its CSI arm, the Vodacom Foundation. ‘The fundamental principle of the foundation is that our mobile communication technologies address some of the country’s most pressing humanitarian challenges,’ says Netshitenzhe, adding that the foundation looks at development from the cradle to adulthood. During the past year, Vodacom has spent close to ZAR100 million through its various initiatives, making a difference to more than 700 000 beneficiaries, she notes.

Vodacom’s flagship initiative is its education programme, which is run in partnership with South Africa’s Department of Basic Education (DBE). Through this programme, 92 teacher centres have been connected across the country, serving as ICT district hubs that ensure continuous training for teachers, learners, unemployed youths and community members, with the aim of contributing to the transformation of teaching and learning through the use of technology. The centres are equipped with interactive boards, laptops, desktops, servers, data projectors, routers and printers, and provide spaces designed to train teachers on how to integrate ICT in the classroom. Another key initiative is the Vodacom e-School, which provides online CAPS-aligned digital content. ‘This has ensured that we bridge the digital divide in making learning exciting using technology,’ says Netshitenzhe, adding that the e-school portal has reached more than 439 000 learners across the country. The Youth Academy, meanwhile, has helped improve the digital skills of young unemployed South Africans. 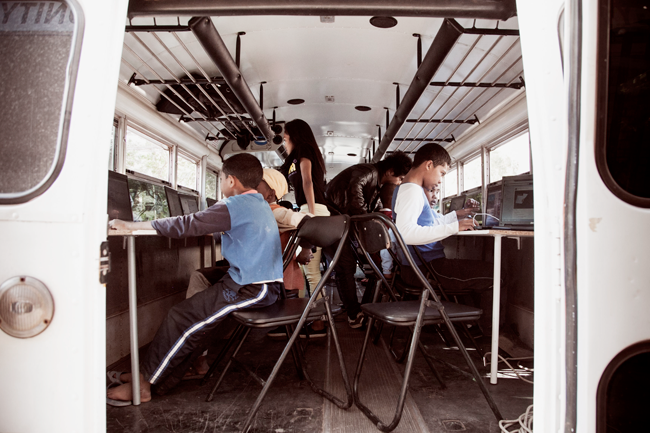 Liquid Telecom South Africa has also chosen to focus on education, albeit at tertiary level. The company has an agreement in place with the Vaal University of Technology that will see more students accessing bursaries in the field of IT. Last year, 10 students received bursaries amounting to a total of ZAR470 000. Bursaries aside, Liquid Telecom South Africa’s investment will also benefit country’s IT industry in the long term by working to remedy the skills shortage in this field of expertise.

According to Calvin Theko, chief corporate services officer of Liquid Telecom, the bursaries will ensure that the lives of students from previously disadvantaged backgrounds are changed in a positive way. ‘They will be set up to become key partakers in the expanding new world of the internet of things,’ he says.

In South Africa, many schools are lagging behind in the digital age due to the prohibitive cost of bandwidth. In a bid to remedy this, Vumatel’s schools project rolls out free, uncapped, open-access fibre-optic infra-structure to every school the company passes during the deployment of its network. Each receives a dedicated 1 Gbps (gigabit per second) line and can choose from a variety of internet service providers for free, uncapped internet connectivity. Since the project began in 2016, more than 120 schools have been connected.

Niel Schoeman, founder of Vumatel and currently the company’s executive chairman, spearheaded this project. He argues that children are the future and says it is vital that they are connected to the information age. ‘The schools initiative is at the very heart of everything we do. We believe that connectivity is key to education and the future of South Africa,’ he says. He also challenged other providers to follow Vumatel’s lead and work together to address one of South Africa’s key challenges. ‘The incremental cost for the telcos to do this for the schools is negligible compared to the potential and fundamental impact it can have.’

Telkom, through the Telkom Foundation, supports projects that focus on education, learner support and social development. Shafika Isaacs, chairperson of the foundation, says they frequently uncover nascent talents and skills among the learners in their programmes, many of whom experience difficulties with depression, anxiety and ill mental health, which show up as addictions and dependencies, and poor learner performance.

‘This is the context in which we have tailored our digital learning programmes in ways that are both sensitive to their precarious learning lives and nurture their innate learning assets and potential. Ours is a radical attempt at challenging the deficit discourse related to poor black youth by focusing attention on their dreams, aspirations and natural talents,’ according to Isaacs. She says the Telkom Foundation has taken an in-depth approach to understanding the learning struggles of approximately 3 000 individual learners at schools in South Africa, who are supported from Grade 8 to matric. 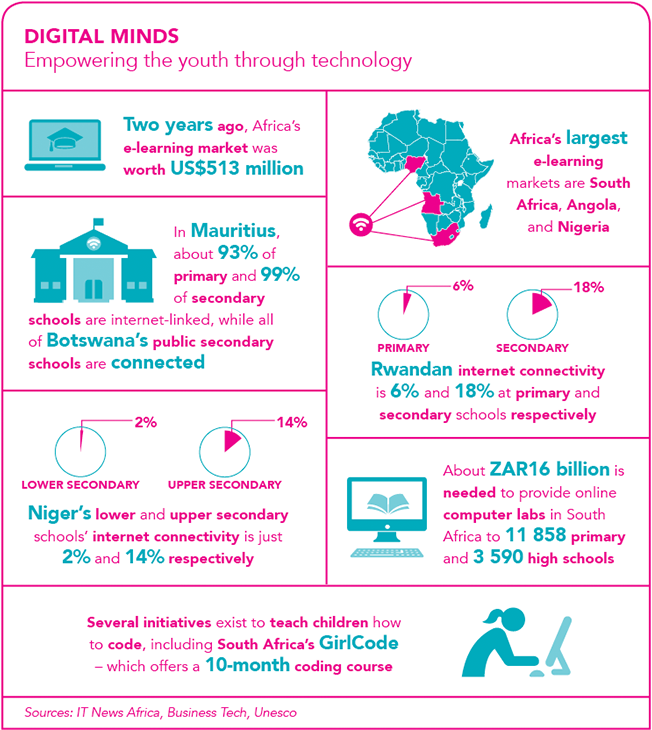 Central to their approach is the ‘conscious integration of psychosocial support, mentorship and coaching, alongside the provision of academic support via dedicated programmes targeted at the students, their teachers and parents,’ says Isaacs. ‘Within this context, we explore how digital technologies can support learners and their teachers to not only improve their academic learning but, importantly, enable them to become self-aware and take care of themselves.’

Telkom has also made a significant investment in the tuition-free, peer-to-peer software engineer training programme WeThinkCode, which aims to eliminate the ICT skills shortage by developing 100 000 coders in Africa over the next decade. Telkom’s ZAR60 million contribution will go a long way towards more than doubling the number of entry-level coders in the South African market by the end of this year. It will also be used to expand WeThinkCode’s Johannesburg facility and contribute to the development of a new campus in Cape Town.

BCX, a Telkom subsidiary, also has a vested interest in WeThinkCode, last year concluding a ZAR60 million educational partnership with the training provider and committing to host (together with other companies in the group) 40 interns from its programme annually for the next three years.

Sipho Maseko, Telkom Group CEO, has publicly supported WeThinkCode’s aims. ‘The Telkom Group has always been invested in youth skills and transformation in South Africa, especially in the digital space,’ he says. ‘Coding skills are a vital component of the new digital economy, and WeThinkCode’s innovative programme is a great way to invest in the future digital minds of South Africa.’

Netshitenzhe firmly believes that to break the cycle of poverty and advance the economic empowerment of South Africans, there needs to be a radical transformation in education. ‘In our view, our existing technology can be an enabler to the provision of quality,’ she says. ‘We plan to accelerate our interventions in education in the coming years with more social partners, to enable young people to enjoy the benefits of the Fourth Industrial Revolution’.

Ghana has opened its first farmer-owned cocoa fermentation centre. The facility, at... END_OF_DOCUMENT_TOKEN_TO_BE_REPLACED

An initiative supporting efforts to ensure the continuation of education amid the coronavirus... END_OF_DOCUMENT_TOKEN_TO_BE_REPLACED

The Namibian government is rolling out a NAD500 million COVID-19 loan scheme... END_OF_DOCUMENT_TOKEN_TO_BE_REPLACED