It’s been a tough couple of years for Namibia. In 2017 the country’s economy shrank 0.6%, according to the Bank of Namibia, and its government bonds were slashed to sub-investment grade by two major ratings agencies. One of the big three agencies left its assessment at the lowest investment grade. But the country’s authorities have acted sensibly and Namibia appears to have weathered the crisis. The World Bank expects growth to return to positive territory in 2018 and the ambition of economic diversification appears to be on track.

Namibia is an arid and sparsely populated country with great mineral wealth. The country’s almost 2.5 million people occupy a space with a surface area larger than that of France. Mining accounts for 11.5% of GDP but more than 50% of export earnings. With a GDPper capita of US$4 902 and a sophisticated financial services sector based in the capital, Windhoek, Namibia is not a poor nation. Indeed, the World Bank classifies it as middle-income country.

Namibia has some excellent infrastructure. Its roads are rated the best in Africa by the WEF. The country still imports more than half its electricity needs from South Africa’s Eskom but is heading towards greater self-sufficiency. Fourteen renewable energy projects have been commissioned by national power utility Nampower, of which nine (with a generation capacity of 93 MW) had been connected to the national grid by mid-2018.

The Trans-Oranje Corridor running to South Africa is already well developed, with a road and rail links in place. The critical corridor, however, is the Trans-Kalahari, which will link the port to South Africa’s Gauteng province, the region’s industrial and commercial hub.

While there has been impressive progress in some areas – a paved road replaced the dirt track that was the only link until the late 1990s, while the border crossing into Botswana is reputed to be the most efficient in Africa – a major part of the jigsaw remains unsecured.

A rail link across Botswana to Gauteng is needed to maximise the impact of the system and, although plans have been in place for some years, it has not yet reached bid status. The original plan was for Botswana to export coal from the Mmamabula mine in eastern Botswana through Walvis Bay. An MoU between the governments of Namibia and Botswana was signed in 2014. However, the plan was changed from a dedicated coal line to a multi-sectoral line at the end of 2016. There has been no real progress with subsequent planning and, with Mmamabula having a more easily developed export option via the 100 km link to the Waterberg in South Africa, this may well be a pipe dream.

Yet this uncertainty has not stopped Walvis Bay harbour pressing ahead with a massive expansion programme. The possible coal terminal was only the third phase of an expansion that has been under way since 2014. This includes a container terminal that will more than double the harbour’s annual capacity – from 350 000 TEUs to 750 000 TEUs. New cranes arrived from China earlier this year and the operation looks set to be fully functioning in 2019. Harbour utility Namport announced that dredging and land reclamation works were more than95% complete by February this year.

Throughput capacity at the harbour has been doubled through dredging, the construction of larger berths, land reclamation and the installation of all the back-of-port infrastructure to support the development. 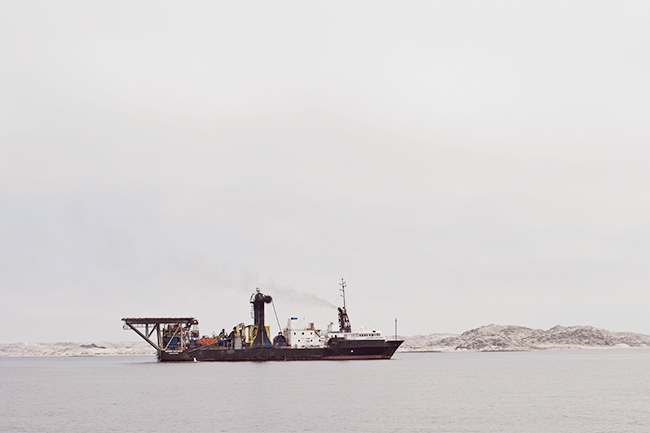 Industrial development, always planned to be a part of this, received an unexpected boost in March when Groupe PSA – which owns Peugot, Citroën and Opel – announced that it would begin assembling vehicles in Namibia in the second-half of 2018. This is a semi-knockdown operation, with kits being assembled in Namibia before being sold into SADC countries.

The waterfront and small boat harbour are part of a national tourism drive to bring greater diversity and stability to Namibia’s growth patterns. The Bank of Namibia notes that hotels and restaurants were the only tertiary sectors to thrive in 2016 and 2017. Tourism accounts for 15% of Namibia’s GDP (more than mining), and the country hosts approximately 1.5 million foreign visitors a year (up from 220 000 in 1990).

However, Namibia has critical vulnerabilities. It has an extremely open economy – together, exports and imports account for90% of GDP – making it susceptible to outside forces. The parlous state of the South African economy is the most important of these. Not only is South Africa Namibia’s biggest trading partner, but the Southern African Customs Union accounts for 30% to 40% of its government revenue. Namibia’s dollar is tied one-to-one to the value of the rand. South Africa’s stagnant growth rate since 2014, combined with poor market conditions for diamonds and uranium, have had negative effects on Namibia.

Global uranium prices were down 15%to 20% in 2017 on the back of oversupply. Namibia is the world’s fifth-largest uranium producer and thus suffers disproportionately. But even this was not the full story. A huge new uranium mine, Husab, located near Swakopmund, has been under construction for several years. It will be the third-biggest uranium mine in Namibia and is set to catapult the country to the world’s second-largest producer of the nuclear mineral. It’s expected to reach full production this year. However, the completion of civil engineering works at Husab negatively affected Namibia’s construction sector, which declined 30%in 2017: nearly 3 000 construction workers found themselves looking for new jobs.

Namibia is likely to benefit from a recovery in the price of uranium in 2018, although the most positive news for the Namibian economy comes not from external factors but internal policies. The government responded to recession by launching an effective austerity programme. President Hage Geingob banned politicians and civil servants from overseas business travel last year. When he attended the AU summit in December 2017, Geingob took an ordinary commercial flight rather than flying by private jet. He also travelled with a smaller delegation than originally planned. According to the World Bank,these measures are working. In 2016/17,the primary fiscal deficit dropped by two percentage points.

Around the world austerity programmes are usually accompanied by political disruption, but there has been no sign of this is Namibia where the ruling South West African People’s Organisation is secure in a single-party dominant system.

More than cutting government expenditure, it is the maintenance of the investment climate that has been impressive during the crisis. Namibia has one of Africa’s two highest-ranked mining investment jurisdictions, along side Botswana. In 2016, a law requiring compulsory local black ownership of mining assets was proposed. It has since been abandoned after Geingob made it clear that there are two problems with the proposed indigenisation programme – it would disincentivise investment and the benefits would accrue to those with access to capital already and not the truly disadvantaged.

Opposition to the indigenisation laws was driven by local interests led by the Namibian Chamber of Commerce and Industry. The fact that state policy-makers listened to the voice of business contrasts with the all-too prevalent antagonism between the two in other sub-Saharan business jurisdictions. Namibia appears to be working towards a most promising future.

Ghana has opened its first farmer-owned cocoa fermentation centre. The facility, at... END_OF_DOCUMENT_TOKEN_TO_BE_REPLACED

An initiative supporting efforts to ensure the continuation of education amid the coronavirus... END_OF_DOCUMENT_TOKEN_TO_BE_REPLACED

The Namibian government is rolling out a NAD500 million COVID-19 loan scheme... END_OF_DOCUMENT_TOKEN_TO_BE_REPLACED