South Africa’s economy was harder hit by the COVID-19 slow-down than many other countries. But the commanding heights of banking and mining show every sign of having weathered the storm and, in the second half of 2021, are contributing strongly to a recovery. While the country faces challenges, especially its extremely high unemployment levels, there does appear to be light at the end of the tunnel. If South Africa’s recovery can dovetail with ongoing business climate reforms, especially in tourism, energy, rail transport and harbours, the country has every chance of emerging from its present, decade-long economic stagnation.

South Africa has a number of critical advantages. The US State Department describes its economy as ‘the most advanced and broad-based on the African continent’. Its traditional powerhouse, mining, is no longer as dominant as it once was, given the decline of the nation’s gold mining industry (now smaller than that of Ghana’s), but the legacy of what was – for the entire 20th century, the largest gold bonanza ever, anywhere – is sophisticated financial and services industries, developed-world quality infrastructure, especially in the cities, and what is still by some distance, the strongest manufacturing sector in sub-Saharan Africa.

South Africa has always generated strong opinions. The transition from generations of white rule to a multi-racial democracy in 1994 was widely heralded as ‘a miracle’. On the other hand, shrinking per capita incomes since 2014 are sometimes regarded as a harbinger of social collapse.

In truth, it has always been rather difficult to see South Africa as ‘just another country’. But there’s nothing abnormal about its strengths, weaknesses and prospects; only one needs to see these with appropriate perspective. 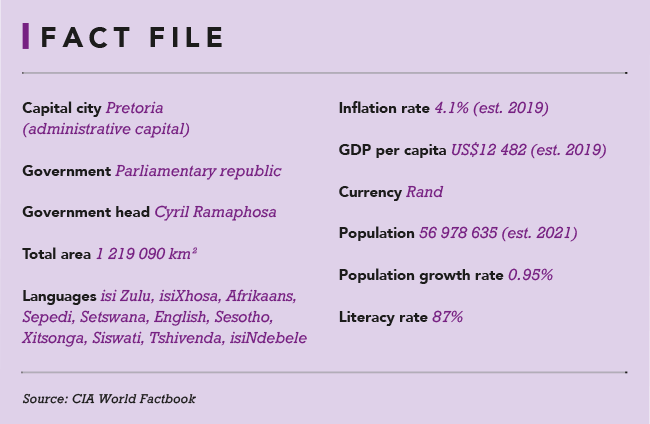 COVID-19 hit South Africa severely. The three-month national lockdown, initiated in March 2020, was one of the most harsh globally. Movement was effectively banned, hitting the tourism industry in particular. But the restrictions enabled South Africa’s health system to cope. Hospital admissions were never overwhelmed as happened in India and locations such as New York and northern Italy. South Africa was able to mobilise its strong private health sector in support of a stressed government health service.

The same ability to lean on the private sector was evident in July this year when widespread looting broke out in two of the country’s nine provinces after the incarceration of former President Jacob Zuma for contempt of court. There were widespread predictions of food shortages, but normal service was restored in a mere six days with special food deliveries being convoyed to the affected areas by grocery retailers from depots in other parts of the country. Both business and society proved far more resilient than many commentators had thought.

The COVID-induced recession was, however, a big hurdle. The economy contracted by more than 7%, which was near the upper end of the scale internationally. Statistics South Africa described the impact as ‘a severe punch in the gut’ that took economic output back to its 2009 level.

The scale was not unexpected. In June 2020, the World Bank said the economic impact of the pandemic would be ‘hardest in countries where there is a heavy reliance on global trade, tourism, commodity exports and external financing’, all characteristics of South Africa. Tourism, in particular, will need to bounce back quickly to recoup some of the jobs lost during successive lockdowns. The country was only recently removed from the UK’s travel ‘red list’, in October.

Yet the recovery of South Africa’s other dominant sectors has been impressive. The mining sector was the first to demonstrate that it had ridden out the recession. Commodity prices soared in 2021, rising 20% in the first six months of the year. The industry, however, was already in a strong position having come through a Darwinian harrowing after the collapse of commodity markets in 2014. Mining companies had been rendered lean and mean, with debts paid down and reserves in hand, even before COVID-19 struck.

Mines proved valuable in the fight against the pandemic with their experience and concentrations of labour providing near-perfect sites for mass treatment and inoculations. Mines were exempted from the COVID-19 lockdown almost from the start.

At the start of August, Anglo American was able to report record half-year profits of ZAR63.3 billion. Sibanye-Stillwater announced half-yearly profits of more than ZAR25.3 billion, while other South African platinum miners (Impala Platinum and Northam Platinum) also racked up record returns. Mining profits had a big impact on South Africa’s fiscus in 2021 with tax revenues soaring in the second quarter, while the country’s trade surplus grew to ZAR57.7 billion in June, the highest figure ever recorded.

After a difficult 2020 as the three-month freeze in most economic activity pushed many vulnerable customers to the wall, South Africa’s traditional big four banks (Standard Bank, Absa, First Rand and Nedbank) bounced back strongly in 2021. The banks, which account for four of Africa’s five largest, were sufficiently resilient to accommodate the crisis. Short-term finance was made widely available to stressed customers, helped by the Reserve Bank cutting the repo rate to its lowest level in around two decades. In the first half of 2021, the big four had headline earnings of ZAR40.6 billion, a 177% increase on the COVID-afflicted period a year previously.

The past couple of years have seen nimble competitors enter the marketplace, driven by new digital technologies. Behind the digital finance race lies a vibrant software and IT services sector. fDi Intelligence, the data division of the Financial Times Group, found investment in technology to be ‘buoyant’ even during the worst of COVID-19 attracting 15 of the 39 new project investments in Africa. fDi Intelligence singled out the Cape Town-Stellenbosch corridor, which hosts 60% of the country’s digital start-ups.

Energy has been a constraint on the growth of the South African economy for more than a decade. State-owned Eskom was mismanaged for much of this period, has massive debts and has been responsible for regular national power outages. However, Eskom is now under new management, one of the reforms instituted by President Cyril Ramaphosa since he assumed office in 2019, and appears to have a clear roadmap to recovery. It has bought down its debt pile by 20% in 2021 alone and has put itself on a renewable-energy trajectory intended to massively reduce the country’s dependency on fossil fuels, especially coal.

Renewable energy will build on the highly successful series of public-private partnerships in this space after 2011. The announcement, in June, that the private sector would be allowed to generate and sell its own electricity, is seen as a major step forward. The Minerals Council South Africa says that mining companies are likely to invest in 2 GW of power generation in the immediate future.

Ramaphosa has portrayed himself as a pro-business reformer and, indeed, has a notable track record in corporate business. He has set out to undo the damage caused by what he himself has referred to as ‘the wasted decade’ overseen by his predecessor. This has resulted in vicious in-fighting within the African National Congress, which has ruled since the introduction of democracy in 1994. Ramaphosa appears to be winning the struggle, with major opponents within the party being suspended or resigning over the past year. This positions Ramaphosa for a second five-year term as ANC leader and, hence, probably national president again.

Ramaphosa has made encouraging noises about a bigger role for the private sector especially in infrastructure delivery, although cynics point out this is needed because the government has run out of fiscal space.

Nevertheless, his government may spur higher levels of growth if promised reforms, all involving more space for private investment in energy, ports and rail transport, go ahead as envisaged. 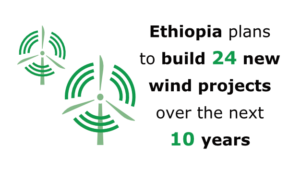 Two new research centres have been established at the University of the... END_OF_DOCUMENT_TOKEN_TO_BE_REPLACED

A 10 MW data centre has been opened in Lagos, Nigeria. Owned by... END_OF_DOCUMENT_TOKEN_TO_BE_REPLACED

South Africans are being offered a ZAR2 million incentive to go for... END_OF_DOCUMENT_TOKEN_TO_BE_REPLACED