Giyani is a remote area in Limpopo, one of South Africa’s most rural provinces. Far from much of the country’s developed infra structure, these communities are cut off from most modern conveniences. Lightning-fast broadband is the last thing on most people’s minds here. But for the townships of Muyexe, Dingamanzi and Gonono, modern techno logy has made a welcome entrance.

The government wanted to provide more service delivery for these communities and,for many residents, the lack of street lighting was a major cause for concern because it went hand-in-hand with a need for increased safety and security. However, the townships were not yet connected to the grid. So tech provided the answer – solar-powered street lights. Johannesburg headquartered company BEKA Schréder installed locally designed and manufactured LED lights mounted on 6m-high poles. The solar panels charge a battery that powers the lights for between 12 and 14 hours. The panels and their batteries are secured by special theft-proof clamps while a thermal sensor monitors the temperature of the LEDs. The current is automatically reduced if it gets too hot, thereby prolonging the life of the hardware. People from the local community were trained to install the lights and maintain them afterwards. The company’s solar street lights were also used to provide the lighting for much of the Baragwanath taxi rank in Soweto, Johannesburg.

More than 1 500 km across the country from Giyani, solar is powering another unique solution for a small, isolated community. At Witsand, in the Western Cape’s Hessequa Municipality, a solar-powered desalination plant will come on-stream in October, producing 100 000 litres of fresh water a day.

This is the world’s first reverse osmosis desalination technology coupled with solar PV energy without batteries. It will help the tiny holiday town cope with the extremely dry conditions that have affected the province in recent years. Hessequa executive mayor Grant Riddles told the media: ‘The municipality is utilising innovative ideas to combat the effects of climate change, by taking the front-runner approach in establishing public-private intergovernmental relationships and joint ventures. These partnerships will ensure a green economy that aims to reduce environmental risks and ecological scarcities.’

These innovative solutions illustrate the versatility of solar power and how it can be adapted quickly to provide the necessary energy for solving infrastructural challenges. After all, around 600 million Africans do not have regular, reliable access to electricity.

In Rwanda, for example, just under 20% of the population have access to power, while 70% have a mobile phone, according to the World Bank. So how do they charge them?

Enter Henri Nyakarundi, a Rwandan refugee who grew up in neighbouring Burundi and studied computer science in the US before moving back to the continent. He has devised a solar-powered kiosk that can be towed by bicycle and charge up to 80 mobile phones simultaneously. His company, African Renewable Energy Distributor (ARED), markets the kiosks. ‘It’s a business in a box,’ Nyakarundi told CNN. ‘I was looking to do something that would not only solve a problem, but [would also have] a social impact by creating micro businesses for people.’

His business model revolves around ‘micro-franchising’, in which ARED leases the kiosks to agents who then use them to sell services such as airtime and prepaid electricity cards, as well as providing phone-charging services. There are several other types of kiosk-type operations all over Africa. In Tanzania, for example, Juabar (meaning ‘solar bar’ in Swahili) charges up to 20 phones at once. Customers pay between Tsh300 and Tsh500 to charge a phone.
In Cape Town, South African engineer James van der Walt has taken the kiosk concept a step further with his design of the SolarTurtle, which is housed in a former shipping container. Power comes from a grid of solar panels mounted on steel arms that fold out of the roof to catch the sun’s rays.Van der Walt says the unit is ideal for providing power in shanty towns and rural areas with basic infrastructure. ‘Micro franchises are really where our heart is. We want to use these boxes as energy kiosks. So, people in the community [who] don’t have power can come and buy electricity from the container blocks,’ Van der Walt told Business Insider. 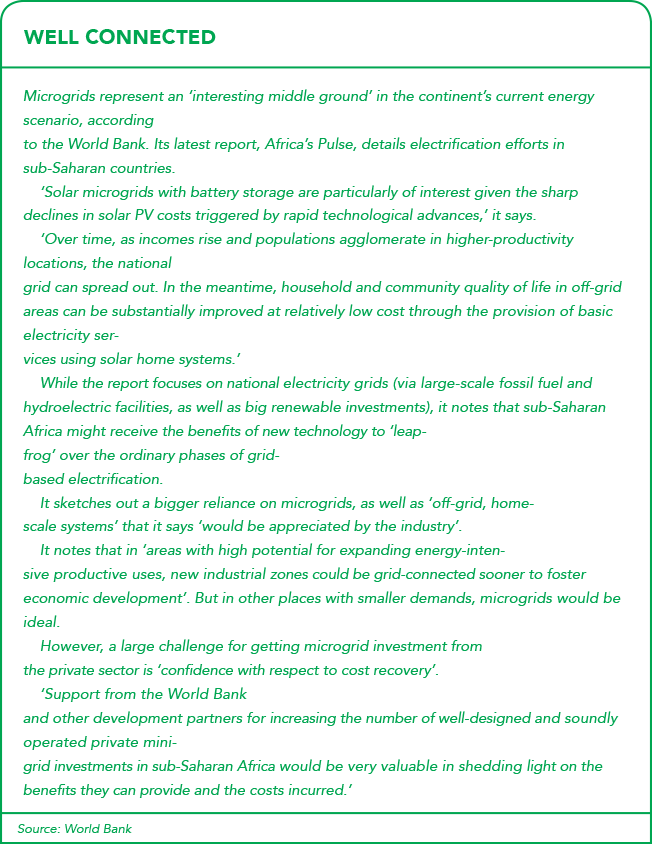 What’s more, the SolarTurtle can even ‘defend’ itself. After one was stoned in 2016 during a service delivery protest, the design was tweaked so that the occupants can now fold away the panels in less than a minute if necessary.

SolarTurtles have many possibilities. One of them in Delft, outside Cape Town, supplies the electricity to power a bakery and a tailor, while others are run as internet cafés. It costs ZAR5 to charge a phone.

However, while these sorts of solar solutions rely on scale and some sort of urban presence, what about isolated villages where people have no access to electricity? Enter the SunStream. Built by UScompany World Panel, it is funky, brightly coloured and extremely durable. The solar panel that provides the power is protected by reinforced glass tested to withstand a direct hit and which can even function after being submerged under water. ‘I originally visited Africa with a solar prototype for household purposes and was consistently asked by residents whether it could charge their phones,’ World PanelCEO John Anderson told Stuff.co.za. ‘I’ve returned with a product that is essential for anyone who owns a mobile phone but who has limited access to dependable energy sources.’ South African telecoms company Vodacom is the retail partner for the SunStream. Meanwhile, MTN, Vodacom’s rival, sells the ReadySet kit, made by USfirm Fenix.

So, after phones, what is next, on the solar spectrum? How about television?In Kenya, M-KOPA Solar has introduced a 16-inch TV powered by a PV panel.

‘There are some 5 million homes in Kenya that don’t have electricity,’ Jesse Moore, founder of M-KOPA Solar, told CNN. ‘And the product most people living off-the-grid want to get is a television.’ The TV and its solar panel cost US$500 and can be paid off with small daily amounts via a mobile money app.

Digital data technology, as well as barcode scanning, will be employed in... END_OF_DOCUMENT_TOKEN_TO_BE_REPLACED

Farmers in East Africa have a free, new mobile tool at their... END_OF_DOCUMENT_TOKEN_TO_BE_REPLACED