South African shoppers are spoilt for choice – not only are malls increasing in number, they are getting ever bigger. According to a recent study published on behalf of the South African Council of Shopping Centres (SACSC), using data compiled by Morgan Stanley Capital International (MSCI) Real Estate South Africa, proposed shopping centres planned in the country’s city regions, as well as those in smaller and service towns, will be 100% larger than those developed during the early 2000s.

Moreover, South Africa is sub-Saharan Africa’s most saturated retail market, representing 88% of the available space in the region. According to the SACSC, South Africa has the sixth most shopping centres in the world. Two of the country’s largest malls are Menlyn Park in Pretoria, and Fourways Mall in Johannesburg, both of which recently embarked on massive expansion projects.

Development shows no signs of stopping – since July 2017, the South African retail development pipeline measured an estimated 1.9 million m2 across 68 shopping centres, many of which are due to be completed by the end of this year. International company Growthpoint Properties is the largest South African primary real estate investment trust listed on the Johannesburg Stock Exchange. South Africa is the only country on the continent in which it operates and invests. Its most recent projects include the extensive ZAR420 million expansion and revamp of Vaal Mall, which it co-owns with Flanagan & Gerard Property Group. The 15 000 m2 expansion saw the mall grow to 65 000 m2. A further two properties on Gauteng’s East Rand – Lakeside Mall in Benoni and Festival Mall in Kempton Park – are currently receiving facelifts at a combined ZAR90 million, which will both be completed by the end of 2018. The company anticipates starting upgrades to its La Lucia Mall in KwaZulu-Natal as well as Cape Town’s Longbeach Mall in the near future. 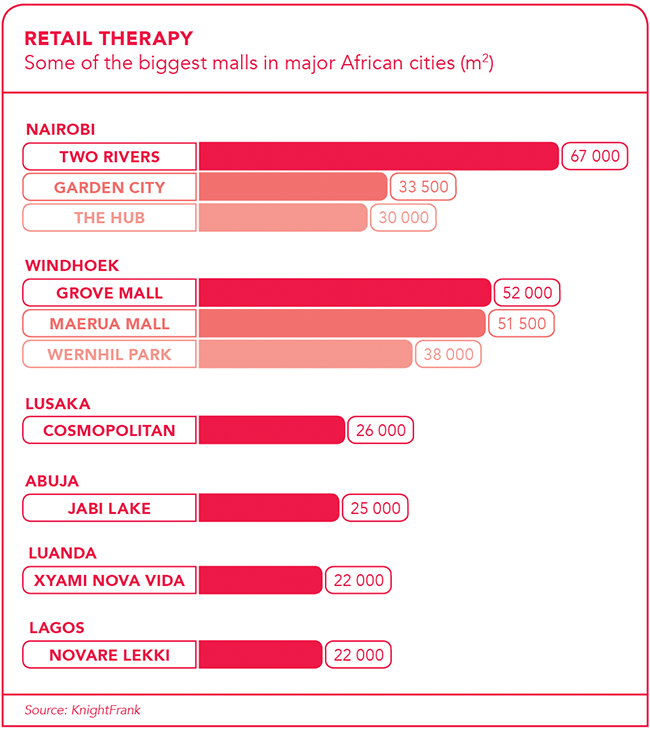 With regards to what potential remains in South Africa for future retail developments, Neil Schloss, Growthpoint Properties head of asset management (retail), says there has been an oversupply of retail over the past five years, and that the constrained macro-economic environment continues to negatively impact retail trading density growth. ‘In this environment, the biggest opportunity is unlocking value from our existing retail property assets through upgrades,’ he says. ‘This ensures the continued relevance of our major retail assets, which in turn protects their market positions. We have also invested in solar-power generation at several of our shopping centres, which supports our environmental commitment by increasing our use of renewable resources as well as lowering our electricity costs and lessening our reliance on the national electricity grid.’

Property firm Safari Investments seems to have found itself a sweet spot. The company has spent much of its history developing retail centres in the formerly segregated townships of South Africa, establishing a commercial presence in traditionally underdeveloped areas. CEO Francois Marais says this was done in recognition of the fact that most of these areas were drastically underserviced in terms of retail facilities.
‘As recently as 2004, it was estimated that Soweto contained approximately 43% of Johannesburg’s population but only some 3% of the city’s retail floor area,’ he says.

Safari sees tremendous investment opportunity specifically in suburban areas, and its prime assets are located in Mamelodi, Soweto, Atteridgeville and Sebokeng. ‘The establishment of assets in these suburban areas has so far proven to deliver stable, growing and rewarding investments,’ says Marais. ‘The market formerly underestimated the affluence of these communities, where there is a growing demand for good-quality retail and services. Our investments are also backed by population growth in instances where the population and household figures have been projected to grow steadily. This should sustain the demand for development within these markets.’

Marais says that Safari also feels strongly about not developing centres that are in any way inferior to those in older and more established suburbs. ‘Fittings, finishes and aesthetics are all high quality. National retailers trade extremely well in our centres and trading densities generally exceed the national average each year,’ he says.

While the company has until now focused primarily on South Africa, with just one development outside the country (in Swakopmund), it’s looking to explore investment opportunities in other countries.
‘We’ll be looking for an emerging market that is not yet saturated, within a stable political and economic climate,’ says Henrike Pienaar, development manager: projects and investor relations at Safari Retail. ‘Significant infra-structure is being poured into some places and we cannot deny seeing opportunities for growth. If expansion of the portfolio is based on solid assets that are cleverly diversified, we are confident that we will be in a position to reap healthy growth.’

Further afield in sub-Saharan Africa, retail developments are also increasing in size and number, driven by growing demand. According to a Knight Frank report, investors’ appetite for sub-Saharan Africa real estate was highlighted in 2016 by the announcement that UK-based emerging markets specialist Actis had raised US$500 million for its third African property fund, Actis Africa Real Estate Fund 3. It was the largest amount that has ever been raised for a private real estate fund focused on sub-Saharan Africa outside South Africa. 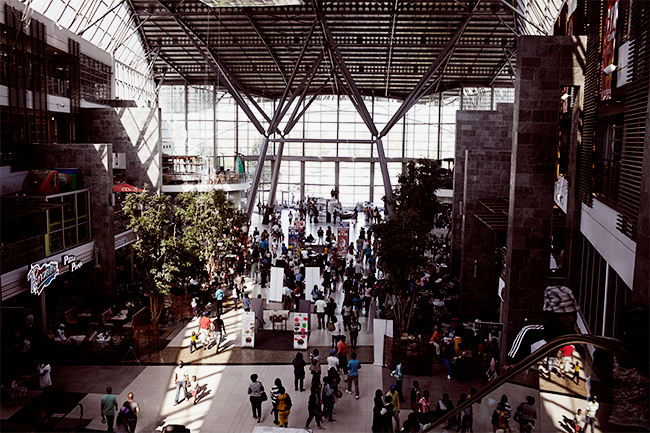 Other real estate investment vehicles launched recently include a pan-African joint venture by Growthpoint and Investec, which has a target of raising US$500 million, and a joint venture by Momentum Global Investment Management and Eris Property Group – the US$250 million Momentum Africa Real Estate Fund, which has allocated capital to development projects in Ghana and Nigeria.

According to Robert Broll, retail leasing consultant East Africa for Broll Property Group, the greatest growth in sub-Saharan Africa is still happening in Kenya. Broll notes, however, that the growth in malls has slowed somewhat, compared to two years ago, although he says it is ‘still substantial’.

Another country doing well is Uganda, he says, although the developments are fewer as well as smaller than those in Kenya. ‘We are also seeing a lot of development happening in Mozambique, despite the shambles of the economy,’ he says.

Broll names the DRC, Cameroon and Côte d’Ivoire as the countries that have the most untapped potential adding that there’s ‘lots of chatter’ about the latter. There are some difficulties in these countries, he admits, including that the lingua franca is French, people are relatively poor, and bureaucracy and corruption make the market somewhat ‘unplayable’.

Asked which current development in sub-Saharan Africa he finds most exciting, Broll names the proposed redevelopment of the Port Louis (Le Caudan) Waterfront in Mauritius, which will be brought up to international standards. ‘It’s a large project backed by the government with excellent potential,’ he says.

Bronwyn Corbett, CEO of Grit Real Estate Income Group, believes that property investments on the continent are widely misunderstood or ignored for a number of reasons, including that investors often look at Africa as if it were a single nation, ignoring that it in fact comprises 54 different countries, cultures, customs and opportunities here. Corbett has been quoted as saying that Africa is ‘the last real opportunity for growth and represents an attractive investment opportunity’.

Grit Real Estate is the only listed property fund that invests exclusively on the continent, not including South Africa. The company has a self-imposed soft target of not exceeding 25% exposure to a single country or asset class. Countries in which it currently operates include Botswana, Kenya, Mauritius, Morocco, Mozambique and Zambia, as well as, most recently, Ghana. In March this year, Grit announced the first of a group of deals that will see it invest US$200 million in Ghana.

Novare is another company that invests in retail and commercial real estate in sub-Saharan Africa, albeit outside of South Africa only. According to MD Pieter de Wet, the company’s largest market in sub-Saharan Africa (based on current allocations rather than proposed) is Nigeria, followed by Zambia and then Mozambique. Its most recent developments, all under the Novare banner, include Lekki Mall and Gateway Mall (both in Nigeria), Great North and Twin Palms in Zambia, and Matola in Mozambique.

Asked what future growth exists for the company in sub-Saharan Africa, De Wet says: ‘We still have a very strong pipeline and we do deem the market still able to provide sufficient returns, given the risks involved. The market environment has been a bit more complex over the past three years but we do see a general stronger demand and ease of doing business.’

As for the potential for future developments in sub-Saharan Africa, generally speaking, De Wet says this differs from country to country, given the complexity of the sub-continent. ‘Certain countries such as Zambia have seen strong development over the last decade. Ghana too. This helps, given the local population being more comfortable with a modern retail offering,’ he says.

What entices developers to move into these new markets? A lack of supply, along with high demand, according to Broll. Retailers in particular have identified the need to grow their business into those markets, he says, and developers are providing opportunities for them to do so.

For De Wet, it is the general lack of modern retail penetration as well as the projected returns that are most appealing. This is surely also the case for other developers moving into the region.

More than 3 000 women leaders of farming co-operatives in Rwanda are... END_OF_DOCUMENT_TOKEN_TO_BE_REPLACED

A 13 km high-voltage power line being built in Zimbabwe is the... END_OF_DOCUMENT_TOKEN_TO_BE_REPLACED

Small and medium-sized businesses in Ghana that are struggling to adapt to... END_OF_DOCUMENT_TOKEN_TO_BE_REPLACED