The fintech space is buzzing with technologies designed to meet, shape and surpass the rapidly changing needs of a new type of audience – the digital consumer. Cited as one of the biggest disruptors to the future of the banking sector, fintech is influencing how financial institutions interact, do business, and create and present their products and services. And then add blockchain to the mix.

A recently released report by Disrupt Africa confirms that the continent has experienced a boom in fintech in the past two years, with more than 300 start-ups already in existence in Africa. The most active countries are South Africa, Kenya and Nigeria, with payments and lending being the most popular. By mid-2017, African fintech start-ups had raised just shy of US$100 million in funding over the last two-and-a-half years, according to Disrupt Africa. 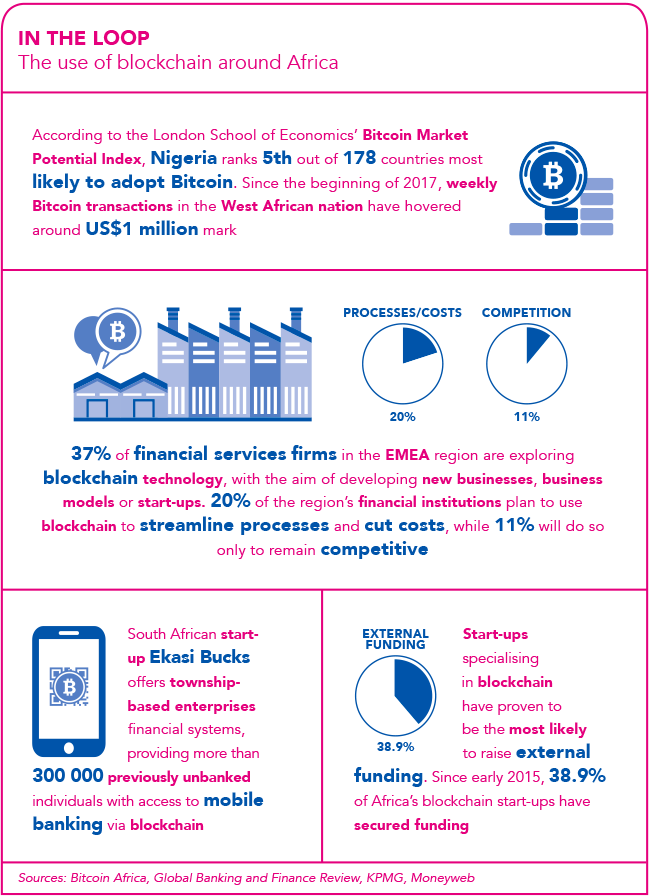 ‘The biggest impact that fintech has had on the financial services sector is that it has democratised the playing field,’ says Saidah Nash Carter, innovation lab head at Thomson Reuters in Africa. ‘It has opened up a wave of opportunity for new companies to come in and solve old problems, or to think about banking and financial inclusion in ways that traditional companies have either not had to think about or have been blind to. That’s what’s most interesting about these newer technologies – they’re forcing the incumbents to think about what banking means in a new way.’

Peter Alkema, CIO of business banking at FNB, argues that there will always be customers with different levels of tolerance and varying requirements, adding that there’s space for both fintechs and traditional banks. ‘One can talk about the different banking areas that fintech is trying to disrupt and grow market share, but the general comment is that outside of banking, we’ve seen a lot of disruptive technologies completely change the way people do things, such as use transport or book accommodation. Banking isn’t immune from that,’ he says.

Alkema doesn’t think fintech and apps will be every customer’s preference, either. ‘A customer is going to prefer to stay in one place to do as much as possible rather than switch context. From an FNB point of view, we believe in that closed ecosystem of a feature-rich app, for the benefit of our customers.’

Lorien Gamaroff, CEO of Bankymoon, a company that provides blockchain-powered solutions and services, argues that this lack of agility may be the downfall of large financial institutions. ‘The new wave of fintechs can focus on smaller segments of the market and on the customer, and build something from the ground up,’ he says. Banks are simply not attracting the next generation, which would ‘rather go to the dentist than stand in a bank queue’, he says. ‘Banks are inflexible and have a different mindset. Upstarts are nimble. Because of that customer focus and putting something in front of a customer that is basic and clean, they’re seeing success.’

The most complicated technology for users is banking technology, says Gamaroff, and banks are trying to do too much all at once. ‘The new generation is used to social networks and chat apps. When you compare some of the straightforward apps to a bank, banks try to have as many services as possible loaded onto their apps, and you have to wade through bloated and convoluted menus. Fintechs are trying to take one small aspect – for example, payments – and focus on that. It’s more of a single-minded approach,’ he says.

Alkema argues that the industry is quite different today to what it was in the past, when it was product-centric. There’s not much innovation left around a home loan, cheque account or credit card, he adds. According to him, the current catch phrase in banking is ‘omni-channel presence’, with customers expecting to start and stop processes across different channels without loss of customer service or data. But this is a huge step up from multi-channel, he says.

‘The start-ups that aren’t 175 years old have been able to begin with a blank sheet and present an app. They’ve built out additional channels from that. It’s been a mobile-first strategy,’ he says. ‘We have to play catch up to that level of expectation.’

Alkema says fintech potential for banking is huge. ‘It’s going to be a leapfrog scenario again, as it was with mobile. I think solutions for Africa are going to be based more around communities and their requirements. The fintechs and start-ups have the benefit of embedding themselves in those places almost from the start. When people solve problems in their own communities, those solutions will be more in tune with what those people need. The question is how well large organisations will partner with those guys.’

A fundamental piece of the fintech puzzle is blockchain – a technology not yet fully understood but the potential of which is becoming increasingly clear.

According to Gamaroff, blockchain will be a massively disruptive force. Referring to it as the ‘next revolution’ he says it would not be an understatement to declare that a new technological revolution is upon us.

‘There’s an amazing amount of hype around blockchain,’ says Naomi Snyman, blockchain lead for the Standard Bank Group. Much of this is because it’s new, and people are speculating about the promise it holds. ‘It certainly has made the financial services industry focus on blockchain in a way that I haven’t seen in a while,’ she says. ‘Many banks are focused on what it is and what it could mean, and even investing in start-ups and young companies that have begun thinking about it and building solutions.’

John Karanja, consulting lead at Kenya-based blockchain accelerator, BitHub.Africa, argues that blockchain could allow for the introduction of new business models, such as micro-transactions coupled with artificial intelligence that, he says, will ‘disrupt key traditional financial markets by offering better profits through faster transactions and better returns due to increased efficiency’. He says blockchain technology ‘is bringing financial freedom to individuals who have now more control of their finances’, which in turn is ‘disrupting the banking sector, where banks now need to improve their customer outreach and user experience of their services’.

Blockchain technology ‘holds tremendous potential to transform our financial system, in South Africa and beyond’, says Farzam Ehsani, blockchain lead at Rand Merchant Bank and chair of the South African Financial Blockchain Consortium. Moreover, blockchain has the potential to significantly reduce costs for a financial system in the long run and improve efficiencies. ‘If you think about the transition from horses and carts to automobiles, there was a very big difference between improving the breed of the horse and the quality of the cart and moving to a completely new paradigm of a “horseless carriage” or automobile. Blockchain technology holds the potential to create such a step change for financial systems across the world,’ he says.

Snyman agrees, saying that the power of a blockchain lies in the networks and users that form part of the blockchain. ‘What this means is that banks will now be forced to work together across domestic and international markets,’ she says, adding that blockchain promises a revolution. ‘This isn’t in terms of the roles we perform now as a central intermediary. It asks the question, “If we will be disrupted, what do we see the future to be?” That’s a big strategic question to ask ourselves.’

Blockchain will also be a move away from products and towards the setting up of platforms, she says. ‘Products are being disrupted by fintechs and new non-bank players. Blockchain technology will allow us to create platforms that a variety of users can be part of.’ 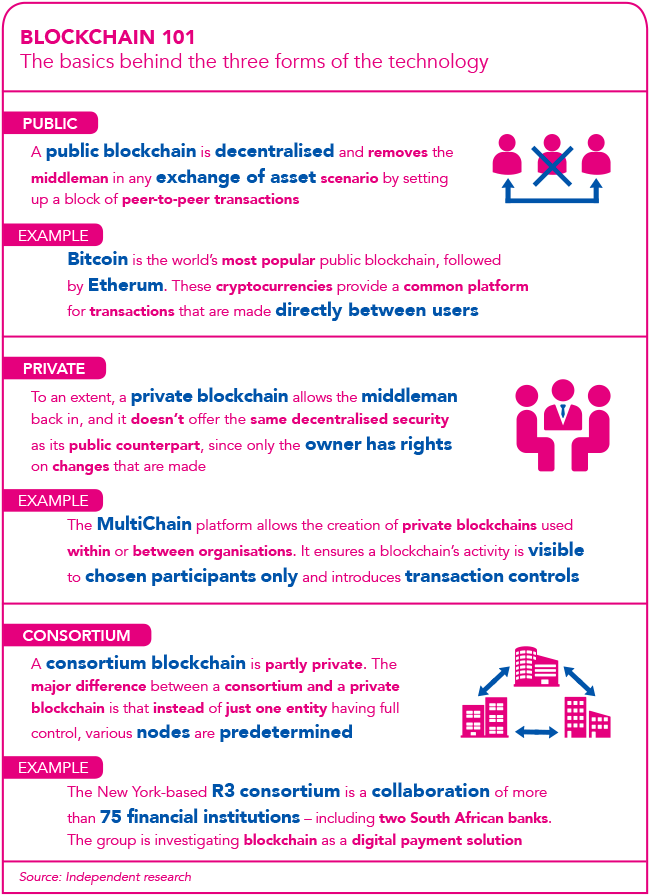 It has also been praised for its ability to speed up transactions and tighten security. ‘Blockchain is distributed, [so] there is no single point to hack,’ says Snyman. ‘This is especially important for financial institutions because all of us are under excessive cyberhacking attempts.’ From a transactional perspective, blockchain will speed up the workflow process by digitising some steps and making the reconciliation process quicker. However, says Snyman, the promise of real-time clearing and settlement is speculative. ‘A lot of work needs to be done on upgrading the technology across platforms,’ she says.

‘The idea of a transparent, reliable, trusted, almost instantly accessible record of transactions is pretty amazing to think about,’ says Nash Carter. ‘There’s an improved customer experience that can come out of appropriately harnessing a blockchain-based technology. The idea that things can be more quickly accessible and validated and trusted without all of the friction in between – and the delays – is quite remarkable to think about.’

Gamaroff strongly believes blockchain is the way of the future. ‘There’s so much good that blockchain technologies can do on the African continent. They can create services that can change lives. It’s going to completely change the continent,’ he says. ‘It’s going to liberate and enable people. That’s what’s exciting about it.’

More than 3 000 women leaders of farming co-operatives in Rwanda are... END_OF_DOCUMENT_TOKEN_TO_BE_REPLACED

A 13 km high-voltage power line being built in Zimbabwe is the... END_OF_DOCUMENT_TOKEN_TO_BE_REPLACED

Small and medium-sized businesses in Ghana that are struggling to adapt to... END_OF_DOCUMENT_TOKEN_TO_BE_REPLACED