Africa is the continent most vulnerable to the impacts of climate change, intensifying the stress on water availability and sectors such as agriculture and public health. Climate change and the increasing volatility of weather ranks among the most-feared business threats in Africa, according to the Allianz Risk Barometer 2018. But there’s good news too.

As the risk of extreme weather events and climate change looms over Africa, new satellite technology and climate modelling on supercomputers is improving the continent’s ability to respond to drought, floods, storms, fires and heat waves. For example, Africa’s weather forecasting skills will be boosted when Eumetsat – the European Organisation for the Exploitation of Meteorological Satellites – launches its new Meteosat satellite in 2021.

This satellite will provide data with an improved spatial and temporal resolution, which will be available every 10 minutes. The new satellite will also carry a lightning imager onboard to provide African countries with information regarding lightning occurrence. All of these improvements and additions on the new satellite will greatly enhance ‘now-casting’ products and services over Africa.

The current satellite providing weather information for the whole of Africa is Meteosat Second-Generation (MSG), which delivers updated data every 15 minutes. The MSG satellite data has proven particularly useful in obtaining information on the instability and moisture of the atmosphere with a high spatial resolution over the entire African continent.

‘Since instability and moisture are two of the key ingredients in thunderstorm for­mation, products were developed to provide a forecast early in the morning in clear-sky conditions on the probability of thunderstorm development later in the day,’ says the South African Weather Service (SAWS). ‘This has proved to be a valuable tool for forecasters in South Africa and other meteorological weather services across the SADC region.’ 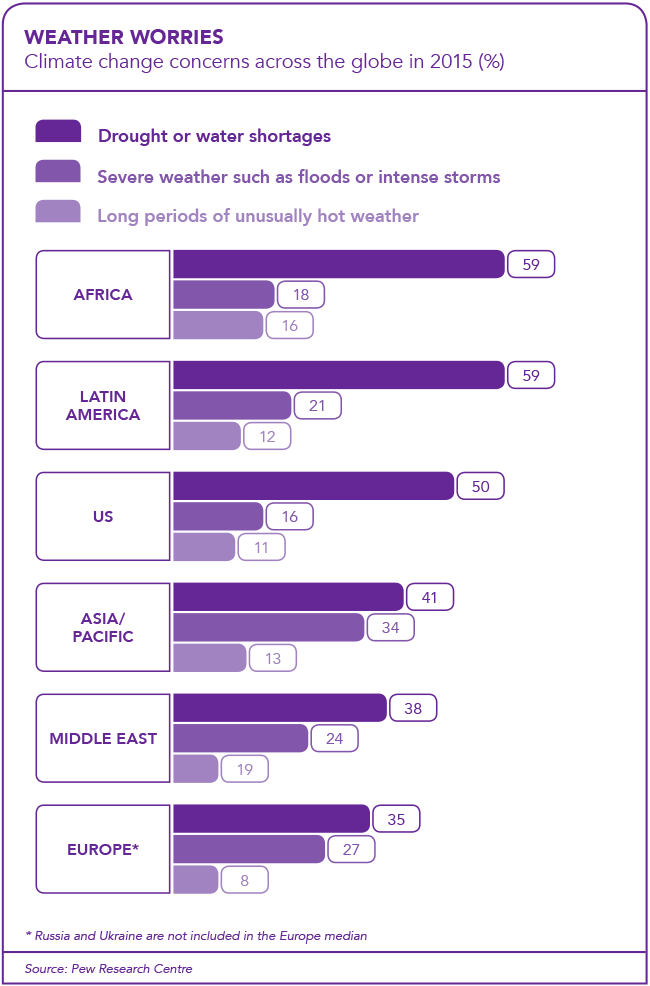 Co-operation is key, particularly for African nations that don’t have weather stations or the capacity to issue their own routine forecasts. For seasonal weather forecasts they often rely on SAWS, the European Centre for Medium-Range Weather Forecasts or the International Research Institute for Climate and Society.

Globally there’s a tradition of sharing weather observations in near-real time, which started in the marine and aviation sector. Apparently, even during the Cold War there was still a reliable daily exchange of weather data between Soviet-aligned and non-Soviet countries in the world.

Today the UN World Meteorological Organisation (WMO) sets the norms and procedures regarding the observation and reporting of weather for meteorological agencies across the globe.

‘Naturally, the standardisation of the methods of reporting as well as the coding of weather messages – for example, surface observations, upper-air balloon observations, aviation forecasts at aerodromes and observations from ships at sea – is central to the efficient exchange of such information,’ according to SAWS. ‘South Africa is part of the WMO Regional Association 1 [RA1], which includes all African countries south of the equator, adjoining the south-west Indian Ocean. RA1 countries collaborate especially in terms of exchanging tropical-cyclone related information, with the French-owned island of La Réunion being responsible for tracking such disturbances as well as issuing tropical cyclone related guidance and warnings.’

While advancements in computing are continuously improving the numeric weather prediction models, they are also creating new partnerships. In October 2017, SAWS (which uses its Cray supercomputer to run mathematical models) signed an MoU with the Pretoria-based Council for Scientific and Industrial Research (CSIR) to collaborate in developing weather and climate services through the council’s Centre for High-Performance Computing. Here, the continent’s largest and fastest supercomputer, called Lengau, assists scientists across a number of disciplines – among them, the climate modellers involved in the CSIR’s African-based earth system model.

This multidisciplinary climate model applies – for the first time ever – an African viewpoint. Project leader Francois Engelbrecht explains: ‘Climate change is already with us and the development of this model will result in im­- proved and reliable projections of the changes in climate over Africa in coming decades.’

Worldwide there are 30 global climate models but at present just one (from Australia) has its roots in the southern hemisphere. The issues that drive the research in the northern hemisphere and developed countries differ fundamentally from those relevant to Africa; therefore it’s crucial to investigate climate change through an African lens. The CSIR has invested ZAR20 million into the African-based model, which is making good progress in the simulation of key areas such as thunderstorms, rainfall, the savanna and the Southern Ocean.

The resolution of global climate models is typically a ‘grid box’ of 50 km to 200 km, which is too coarse to render certain fine-scale physical and bio-geomechanical processes visible. The new model includes processes at a resolution of 1 km to 10 km. ‘It will allow us to model processes that respond quickly to change, similar to monitoring a patient’s breathing and heart beat,’ says CSIR chief oceanographer Pedro Monteiro, who uses ocean robotics and drones in his ocean research. ‘Our earth systems model is going to be South Africa’s contribution to the Intergovernmental Panel on Climate Change 6th Assessment Report in 2021.’

Global climate models form the base of SAWS’ long-range forecasts (defined as between one month and two years ahead).

According to SAWS: ‘Numeric weather prediction models and modelling in general have allowed for particularly accurate weather scenarios: a seven-day forecast is the norm.’ But, the organisation adds, ‘even a 10- to 14-day forecast has value’.

Experts point out that forecasting is interpretative, similar to translating languages. Weather forecasters typically take a collection of largely abstract mathematical and science information, and package this using plain language and maps, to describe to the end user – for example pilot, mariner, farmer or member of the public – what weather is expected, where, when and why.

Ultimately, it’s not only how forecasts are produced and interpreted, but also how they are communicated and used by different stakeholders.

Chris Jack, principal researcher at the University of Cape Town’s climate systems analysis group, says: ‘A lot of our work lies in the translation of forecasts for decision-makers.’ He cites the Western Cape Winter Rainfall Outlook Summit in May 2017, where top experts couldn’t agree on the long-range seasonal forecast and concluded: ‘The Western Cape needs to consider the full range of possibilities that comprise that the 2017 winter season may be drier than normal […] or normal […] or wetter than normal’.

‘Our challenge was trying to communicate the skill of the forecast to the decision-makers, who were desperate for information,’ says Jack. ‘Some decision-makers ended up using the forecast, even though there wasn’t any skill. So it’s less about how to produce a better forecast as to how you enable the use of forecasts.’

Most of the southern part of South Africa is difficult to forecast but the further north or east one goes, the higher the predictive skill, says Jack. Seasonal rainfall in the Cape is driven by cold winter storms (‘chaotic, random systems’) from the Southern Ocean. Other parts of the continent are more predictable because summer rainfall is often related to thunder-storms, which can be traced back to changes in ocean temperatures, moisture availability in the air or air circulation patterns.

‘A lot of the seasonal forecasting work has focused on summer rainfall because that’s where most of the agriculture happens and decisions are made,’ Jack notes. ‘The current drought in Cape Town has brought attention to the difficulties of forecasting winter rainfall.’

As SAWS puts it: seasonal forecasts are ‘probabilistic’, which means they ‘attempt to describe the chances that specific rainfall and temperature conditions will occur in the future’.

On the upside, the media attention on drought and other extreme weather events in Africa has strengthened the co-operation between weather service, disaster management and other stakeholders. There’s been a shift from weather forecasting to impact-based forecasts and early warning systems to alert farmers, motorists, homeowners, aviation and maritime users of potential storms, floods, droughts, fires and other events. This – with the improved real-time monitoring of climate and hydrological conditions and the growing weather and climate data­bases – is enabling Africa’s decision-makers to better prepare the continent for climate change.

Digital data technology, as well as barcode scanning, will be employed in... END_OF_DOCUMENT_TOKEN_TO_BE_REPLACED

Farmers in East Africa have a free, new mobile tool at their... END_OF_DOCUMENT_TOKEN_TO_BE_REPLACED