It’s difficult to overstate how popular Honour of Kings is in China. The fantasy role-play multiplayer online battle arena game is hard to define – and once you start playing, it’s even harder to quit.

In August, the game’s owner, Tencent Holdings (in which JSE-listed Naspers has a 34% stake), posted a 70% increase in net income for Q2 (up to a record CNY18.2 billion), with Honour of Kings driving a notable 54% surge in mobile gaming revenue.

The numbers alone don’t tell the full story, though. China’s national obsession with Honour of Kings is so huge that in July, the government-owned People’s Daily called the game ‘poison’ and demanded regulations. Those regulations came quickly. Children under 12 are now allowed to play the game for only one hour a day, while teens aged 12 to 18 are permitted to play for just two hours. When the national government is limiting your screen time, you know you have a popular game on your hands.

The ‘on your hands’ part is important, because one of the key factors behind the game’s success is that – unlike the world’s most popular PC game, League of Legends (also owned by Tencent) – Honour of Kings
is specifically designed to be played on a mobile platform. And in China – as in Africa – many gamers don’t have access to a gaming console or a PC at home.

Mobile gaming is on the rise worldwide. In April 2016, research from gaming market intelligence firm Newzoo found that – for the first time – mobile gaming revenues (at US$36.9 billion or 37% of the market) were higher than those generated by PC (US$31.9 billion) and console gaming (US$29 billion).

According to PwC’s Entertainment and Media Outlook (2015–2019) for Kenya, Nigeria and South Africa, ‘the biggest success story in South African video games is the growth of social/casual revenues’, which the report defined as app-based games on tablets or mobile phones, or browser games aimed at a casual audience.

The research also confirmed that social/casual gaming revenues had overtaken traditional gaming revenues in South Africa as well. ‘This is rare, especially so in a major geography with a relatively well-established traditional games business, but can be attributed to the growth in smartphone ownership combined with the relative weakness of fixed broadband infrastructure in the country.’

A year later, in its 2016–2020 Entertainment and Media Outlook, PwC reported: ‘The break-neck evolution of app-based social/casual gaming in particular has resulted in thousands more South Africans considering themselves to be gamers – game-changing in its truest sense – and manufacturers of more expensive gaming experiences will be enthused by the potential of this new demographic.’

Meanwhile in Nigeria, PwC’s 2015 analysis stated that the market is dominated by social/casual gaming, eclipsing fledgling revenues on more costly devices such as consoles and PCs. ‘The mobile gaming market has flourished and in 2014, social/casual gaming revenue accounted for 77% of total video game revenue at US$70 million. This will increase further to US$147 million in 2019, at a CAGR of 16.1%. At this time, social/casual games will comprise 84% of total video game revenue in Nigeria, driven by greater ownership of mobile devices than of consoles and PCs. Video game advertising revenue remains non-existent in this market.’

PwC’s 2016 report forecast Kenya to be the world’s fastest-growing video game market over the next five years, with a CAGR of 13.4%. ‘By contrast to Nigeria, most growth will come from online/microtransaction revenue, although social/casual will also grow strongly.’ 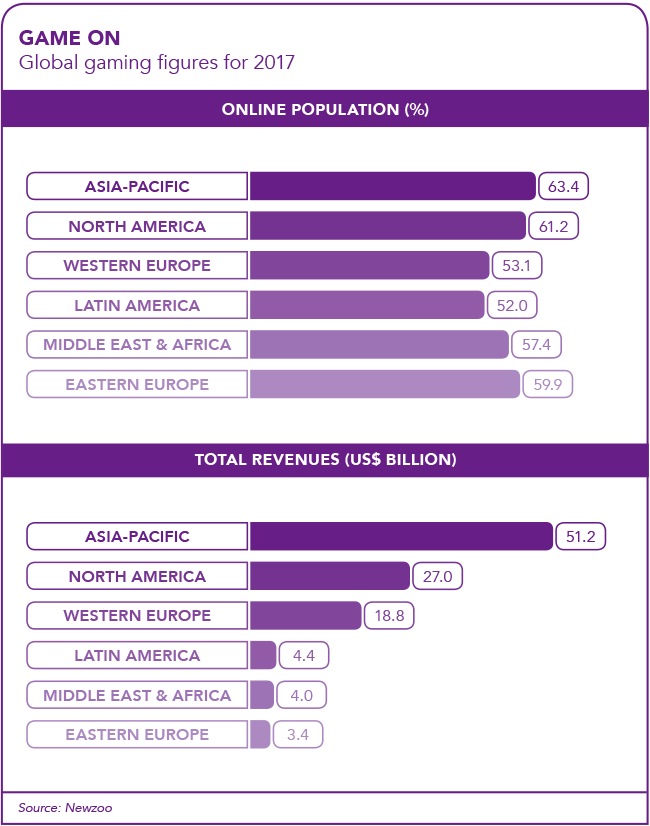 On the face of it, Africa is a prime market for mobile game developers. Smartphones are the most popular internet access platform and the continental age pyramid skews relatively young, with more than half the population younger than 25. Newzoo’s Global Games Market Report for 2017 found that the Africa and Middle East region was the highest growing in the world, with a year-on-year growth rate of 25% – far more than the next highest, Latin America at 13.9%.

In Kenya, a consortium including partners such as VIA Water and iHub launched the Chezo Serious Gaming Hub in mid-2016, with the aim to realise the country’s untapped gaming potential. ‘Games form an integral part of African tradition,’ the partners said in a statement. ‘Kenya boasts a rich and vibrant technology scene and an entrepreneurship ecosystem that has in recent years received worldwide attention for churning out ingenious innovations. Despite this, serious gaming is still nascent and untapped, as is the case globally.’

The truth is, Africa’s home-grown game developers still aren’t getting the traction one might expect. According to a report by Serious About Games‚ the South African game development industry increased its revenue from ZAR29.7 million in 2014 to ZAR100 million in 2016 – yet only ZAR72 700 of that (barely 0.07%) came from locally developed games bought by local gamers.

PwC’s 2015 research revealed that ‘Nigerian games only manage a few thousand downloads locally, making it difficult to attract advertisers or build revenues via in-game transactions (particularly given a local reticence to spend money on games). Optimistic developers still look to future potential revenues as smartphone penetration grows (forecast to rise from 16% to 42% from 2014 to 2019) and the younger population […] warms to new styles of gaming’.

Maybe, then, an immediate solution is to work within the framework and infrastructure that’s currently available. Multinational tech firm Digitata, through its Digitata Insights team, is engaging with feature phone users by using unstructured supplementary service data (USSD) technology to create games that don’t require a smartphone or data. While they also offer smartphone games, the idea is to create sponsored USSD games that are interactive and text-based, and accessible to anybody with any kind of mobile phone.

‘Even those people with smartphones find it very difficult to access these online services due to the high cost of data across Africa in general, compared to disposable income. USSD offers a cheap/free, ubiquitous, cross-device method of engaging with entertainment, news and more.’

Explaining how Digitata Insights’ Gamification Engagement Platform connects brands with consumers, Walton says: ‘The concept of “gamification” – that is, applying game methodology and thinking to marketing activities – is an effective way to encourage people to engage with a brand’s products or service to gain knowledge about them and experience them.

‘People respond better when they are not being “spoken to”, but are rather “engaging with” a brand’s messaging – especially voluntarily. Through gamification, people don’t feel like they are being pushed brand marketing, and rather they engage with a fun, rewarding and educational experience.’

An example of this was the MasterPass Race by MasterCard – a free-to-play game that took players through 17 levels and taught them about the MasterPass product as they played a series of mini-games. The ultimate purpose was to educate the market on the benefits of the MasterPass app and to drive acquisitions. By the end of the campaign, the game had attracted more than 688 000 players – 87% completed their profile, 37% clocked the game and 45% downloaded the MasterPass app.

‘We learnt many lessons through this campaign,’ says Walton. ‘One was that a USSD engagement can encourage a mobile app download, completely breaking the general misconception that only low-end feature phone users use USSD.

‘USSD as a discovery mechanism to reach people is vastly underestimated,’ he says, adding that ‘to be blunt, if you reward people with airtime, they will do pretty much anything.’

Honour of Kings and the MasterPass Race are two very different video games. The former is the world’s top-grossing game and most popular free-download application – a massive multiplayer game with sophisticated graphics, complex game-play and in excess of 80 million daily active users across the globe. The latter was a text-based game, created to promote a brand and obtain database information from players.

Yet both, in their own way, demonstrate the power of contemporary video games. It’s a big, big business and Africa is well positioned to move to the next level.

Digital data technology, as well as barcode scanning, will be employed in... END_OF_DOCUMENT_TOKEN_TO_BE_REPLACED

Farmers in East Africa have a free, new mobile tool at their... END_OF_DOCUMENT_TOKEN_TO_BE_REPLACED