Intellectual property (IP) has become widely regarded as the cornerstone of a company’s business edge. And when it comes to trademarks – an integral part of IP – Africa, with its diverse IP and trademark registration regimes, can appear intimidating to businesses that operate on the continent when deciding how to best protect their IP rights against infringement by competitors in different markets.

The need for adequate legal protection of trademarks has become even more critical in the digital era, which most business – certainly multinationals and the larger ones in Africa – have embraced. But it remains important to consider the current trademark law regime of South Africa, by far the continent’s most industrialised nation.

‘Trademark activity is growing rapidly in Africa, with regard to both protection and enforcement,’ according to Kaajal Nagindas, senior associate at IP firm Spoor & Fisher in Johannesburg. ‘However, questions range from how best companies should protect their trademarks in the different African countries; what ARIPO and OAPI are; whether or not these registration systems work effectively; what national IP and trademark registration systems offer; and why there are doubts about the validity and enforceability of the so-called Madrid international registrations system in some African countries.’

Bernadette Versfeld, partner in the IP, IT, electronic business, media and telecoms practice of law firm Webber Wentzel, supports this view. Trademark rights are territorial, she says, and it’s essential that each territory be considered separately when formulating a brand strategy. ‘By and large, separate applications need to be filed in each African jurisdiction,’ says Versfeld, adding that there are two regional intellectual property offices operating in Africa, namely the African Regional Intellectual Property Organisation (ARIPO) and the African Intellectual Property Organisation (OAPI). An ARIPO registration facilitates the central filing of trademarks in any or all of its 21 designated member states, while an OAPI trademark registration extends it automatically to its 17 member states. ‘Of importance, however, is that not all member states have national legislation to enforce trademark rights, and separate national applications may be more appropriate,’ she says.

The ARIPO system facilitates trademark registration in the continent’s mostly English-speaking states (including Botswana, Malawi, Lesotho, Namibia, Tanzania and Zimbabwe), while OAPI does so in the mostly French-speaking parts of the continent, such as Comoros, Gabon, Côte d’Ivoire, Mali and Senegal, among others.

Nagindas says that while the system works very well for patents and well enough for some of the countries in terms of trademarks, there are concerns about member countries that failed to amend their municipal legislation to give effect to an ARIPO registration.

‘Therefore, in these countries, it is recommended that national applications be filed instead.’ She explains that OAPI member states are, inter alia, also members of other IP/trademark protection systems such as the Madrid Protocol, the primary international system for facilitating the registration of trademarks in multiple jurisdictions around the world. 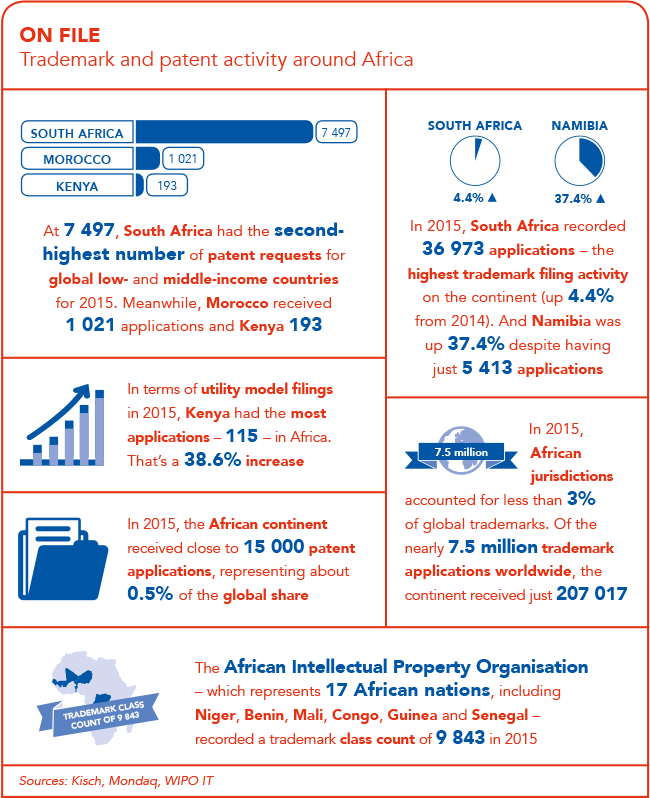 Nagindas also cautions that, as OAPI has not amended the underlying agreement that created this union, international trademark registrations designating OAPI will not be enforceable. Neither are the rights under the Madrid Protocol (which a few African countries have acceded to) valid or enforceable due to the local law in these countries not having been amended to recognise these rights, she says.

According to Versfeld, distributors in particular are known to sometimes infringe on trademark rights if businesses don’t take the necessary caution. ‘Some African territories do not protect common law rights, and without the registration of trademarks in these territories, brands cannot be protected from infringement by third parties, including ex-distributors and licensees.

‘Typically when a business expands into Africa, it partners with a third party – for example, a distributor or licensee, in the case of consumables,’ she says.

‘Very often, brand owners fail to enter into appropriate commercial arrangements with their appointed distributor or licensee, and they also overlook filing for trademark protection in respect of their brand names while the distributor “tests” the market. This can have dire consequences for a brand owner, including loss of trademark rights.’

Versfeld says there have been instances in the past where the distributor has taken steps to register the brands as trademarks in their own name, the owner being oblivious, resulting in the distributor having stronger rights when the relationship between the parties is terminated.

In South Africa, trademarks are protected under both common law as well as the Trademarks Act 194 of 1993. According to Nagindas, registration of trademarks with South Africa’s Companies and Intellectual Properties Commission in terms of the Trademarks Act is arguably the most effective form of protection. ‘Once the trademark has been successfully registered, the act ensures that protection is available immediately without the need to first establish a reputation in the mark,’ she says. ‘On the other hand, common law in South Africa affords protection based primarily on the fact that the trademark has built up a reputation.’

On the question of the appropriateness of the prevalent South African trademark legal regime, Likonelo Magagula, director and head of the IP team at legal firm Norton Rose Fulbright, argues that the current Trademarks Act is sufficient to deal with issues presented by the digital era. She says the act is fairly current, having been passed in 1993.

‘Whether the act is sufficient or not does not take away from the fact that there will always be disputes. We have seen those through cyber-squatting, and the fact that our domain registration system is based on a first-come, first-served basis does not help matters.

‘We always advise clients to ensure that they register their domain names quickly, lest a cyber-squatter gets wind of it and registers that domain first. While the ADR [alternative dispute resolution] process under the Electronic Communications and Transactions Act provides recourse, that recourse comes at a price.’

She says disputes around the same or similar domains could be avoided if the domain registration process was not on a first-come, first-served basis. In other words, if on registration the domain was required to provide proof of ownership of some sort, there would be fewer disputes.

Magagula says the same issues ‘somewhat’ apply to trademarks too. ‘As soon as a business comes up with a brand name, they should do the necessary checks at the registry to ensure that the mark does not conflict with other marks. And, if the mark is clear, they should apply for registration immediately.’

Magagula says another way for businesses to ensure they protect their trademarks in the digital era is to ensure that as soon as they come up with a brand name, they register it with all the social media platforms before others do.

‘The issues of confusion as regards trademarks or domain names will always be there. The problem though is that when it comes to IT/domains, no one checks whether the domain the business wants to register sounds like another domain name.

‘The situation is much simpler when one registers a trademark, compared to domain names, because the registrar of trademark does an assessment to check whether the trademark the company wishes to register sounds, looks or is conceptually the same as that of another company on the register,’ says Magagula, adding that if any of those three elements are present, the registrar is likely to refuse registration of the trademark.

Egypt is building what could be the world’s largest solar hybrid facility... END_OF_DOCUMENT_TOKEN_TO_BE_REPLACED

Targeted insurance is being developed to help protect Madagascar’s farmers against the... END_OF_DOCUMENT_TOKEN_TO_BE_REPLACED

Botswana is on track to become the first country in Africa to... END_OF_DOCUMENT_TOKEN_TO_BE_REPLACED