As the overhead costs of standalone houses continue to climb, along with a steady increase in the general cost of living, people are turning towards the convenience of mixed-use developments. Offering an assortment of amenities such as shops, restaurants, cafes, gyms and other recreational areas, within easy walking distance of residential and office space, wrapped up in a safe and secure bundle, it’s little wonder savvy buyers are investing.

When it comes to buying or buying-to-let in a mixed-use development in South Africa, the current climate has further increased the attractiveness thereof.

Even before the nationwide lockdown due to COVID-19, investor sentiment had shifted towards mixed-use precincts and the value they offer over standalone houses. A series of reductions by the Reserve Bank over the past few months has taken the prime commercial lending rate from 7.75% to 7% – the lowest it has been in almost five decades. Cuts like this make for very favourable lending conditions, presenting those who have excess capital with a prime investment opportunity.

Changing population dynamics are also driving the sector quite strongly. According to Nicholas Stopforth, director of Amdec Property Developments, cost-conscious millennials are becoming more discerning about where they choose to invest, in terms of location, overheads, amenities and lifestyle offerings. ‘The millennial generation is renowned for being risk averse, so they are more likely to steer clear of pre-owned properties that typically carry the “voetstoots” clause,’ he says.

‘Millennials recognise the false economy of buying homes in affordable suburbs away from the city, as their personal budgets are consumed by additional travel, maintenance and security costs.’

Yael Geffen, CEO of Lew Geffen Sotheby’s International Realty, calls the millennial generation a ‘key influencer’ with unique needs and a preference for denser, mixed-use neighbourhoods and vibrant live/work/play districts. ‘In fact, one of the primary traits of the millennial home-buyer is their desire for walkability,’ she says. Millennials aside, more and more people are attracted to these developments because of the convenience they afford, adds Geffen, such as having every amenity they could need right on their doorstep, a short, easy commute to work and the peace of mind of living in a secure precinct.

Mixed-use developments not only benefit those who live and work in the precinct but also make a broader impact on the economy. Elaine Wilson, divisional director of property intel at Broll Property Group, argues that infrastructure upgrades for cities are among the greatest benefits of mixed-used developments. Often, these sorts of property builds require enhancements to road networks, along with improvements in water and sanitation services, electrical supply and internet connectivity, she says.

According to Geffen, as well as cultivating both a residential and commercial audience, mixed-use developments have the power to attract an immense amount of interest and foot traffic for commercial clients, compared to standalone stores. ‘Municipalities, and therefore cities, benefit from the increase in property-tax revenue. As communities become denser, municipalities gain more tax revenue than before development. They also save a considerable amount on infrastructure costs, like roads and sewers, when serving compact development instead of large-lot subdivisions.’

Geffen cites US cities such as Seattle and New York – where a single city block can house a broad mix of restaurants, office buildings, residences and shops – as good examples of successful mixed-use developments. In London, the Docklands is an excellent exemplar of an area that has embraced mixed-use development and, in the East, cities such as Singapore and Hong Kong, she adds. 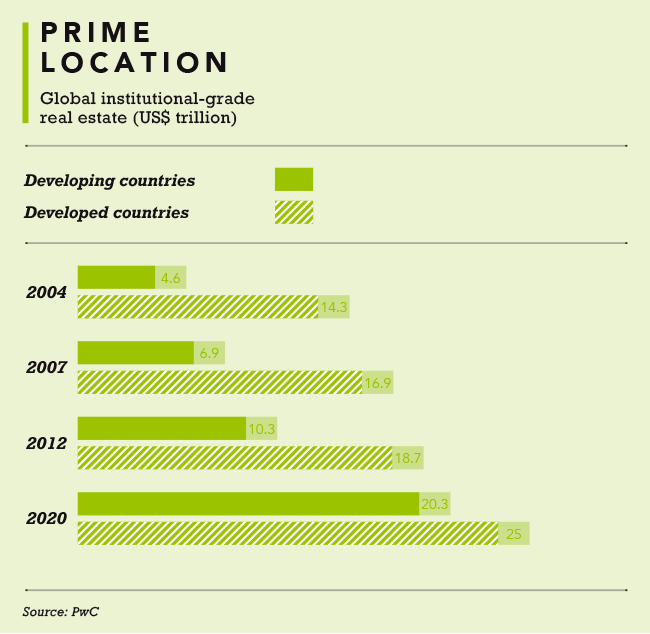 In Africa, countries such as Mauritius, Kenya, Rwanda and Nigeria all have significant mixed-use developments under construction. On the island of Mauritius, the government’s Smart City Scheme has aided the setting up of intelligent urban ecosystems across the country in the form of mixed-use developments that integrate office, business, residential and leisure components. A prime example is the Moka smart city, with its intelligent planning and eco-efficient approach to sustainability. In Kenya, Nairobi’s mixed-use developments include Garden City by Actis on Thika Road, Centum’s Two Rivers development, and the Pinnacle in Upper Hill – all projects that have put this East African country on the global map.

South African metros – Gauteng and Cape Town in particular – have certainly embraced the concept of mixed-use precincts, with some of the largest developments being Waterfall, Melrose Arch and Steyn City in Gauteng, and Century City and the V&A Waterfront in the Western Cape. Smaller nodes include precincts such as Loftus Park and Menlyn Maine in Pretoria, and the Woodstock Quarter and De Waterkant in Cape Town.

One of Cape Town’s latest mixed-use developments, the ZAR14 billion Harbour Arch, is due to begin construction this year. It will bring 200 000 m2 of residential, retail and office space – spread across six individual tower blocks – as well as two new hotels operated by Marriott International, to the Foreshore. The development is so sought-after that 95% of its 432 residential units have already been sold, these ranging in price from ZAR1.6 million to ZAR8 million.

In Pretoria, there are hopes that the establishment of Salvokop, a mixed-use commercial and residential development by the Department of Public Works and Infrastructure (DPWI), will help do two things: drive integration and attract private sector investment. The 56 000 m2 head office of Statistics South Africa was the initial property to be completed in the precinct, in 2016. The first phase of the development, which was due to begin in April this year, will accommodate a further four government head offices, namely Correctional Services, Higher Education and Training, Social Development, and Home Affairs.

The precinct, a part of the Tshwane Inner City Regeneration programme and also aligned to the City of Tshwane’s Spatial Development Framework, is one of five identified in the inner city. The total current development opportunity of 524 000 m2 has provision for office, commercial, residential, retail and open space, as well as schools and healthcare facilities. It has an estimated value of ZAR18 billion.

According to the DPWI, consultation will continue with other cities, including the City of Cape Town, the Buffalo City municipality and the City of eThekwini for similar developments.

Amdec, the developer of Harbour Arch, is also responsible for the Melrose Arch precinct in Johannesburg. The group’s One on Whiteley development at Melrose Arch has seen rapid uptake of its 241 residential apartments and is already 94% sold out.

Stopforth says that amenity has been ‘the value differentiator’ for securing tenants and investors at both One on Whiteley and Harbour Arch. ‘Living within a pedestrianised live-work-play precinct – where all your needs are met within walking distance of your home, along with the benefits of a safe and secure, connected and sociable, lock-up-and-go lifestyle – presents a compelling value proposition that more and more South Africans are waking up to,’ he says.

One unfortunate drawback of mixed-use neighbourhoods is that affordability is often worse than in other parts of a city. ‘The convenience of being able to walk to a nearby trendy coffee shop is wonderful, but often the premium that people pay for that luxury means the serving staff can’t afford to live near their job,’ says Geffen. ‘In fact, studies have shown that housing affordability is only improved for people who were already able to afford higher housing costs. Although mixed-use areas were initially intended to make housing more affordable for people who work in the city, factors such as the shift to a knowledge-based economy have reduced social diversity and added a more exclusive element.’

Broll’s Wilson echoes this sentiment. ‘The inclusive nature has not taken off as much as the exclusive nature of it.’ She cautions about how it can create what she calls a ‘laager mentality’, where people do not venture far out of their ‘cocoons’. To be most successful, these developments need to be affordable to people of all income levels – not just high earners, says Wilson – though this will require a change of mindset.

‘We are going to get to the point where mixed-used developments aimed at the highest income bracket lose their appeal,’ she says. ‘There has to be a shift downwards to the lower and middle-income classes to make it more inclusive.’

Côte d’Ivoire has become the second country to take delivery of COVID-19... END_OF_DOCUMENT_TOKEN_TO_BE_REPLACED

Nigeria is set to commence work this quarter on a complete overhaul... END_OF_DOCUMENT_TOKEN_TO_BE_REPLACED

Burundi and Rwanda are going ahead with plans to build a multi-purpose... END_OF_DOCUMENT_TOKEN_TO_BE_REPLACED