Despite decades of work by industry players, precious gems that are mined in war zones and used to fund violent conflicts are still ending up on the fingers and around the necks of oblivious consumers around the world.

While acknowledging that major jewellery companies have improved their sourcing of gold and diamonds, Human Rights Watch (HRW) insists that more can – and must – be done. ‘Despite the progress, most jewellery companies can do much more to address human rights in their supply chains and share that information with the public,’ according to Juliane Kippenberg, associate director in the children’s rights division of HRW. The organisation adds that there are still serious issues with abuse, forced labour and underpayment in diamond-heavy regions.

Johannes Schweifer, CEO of CoreLedger, summed up the problem in a recent interview with Cointelegraph. ‘The biggest problem in the diamond industry has always been transparency,’ he says. ‘Most gemstones aren’t able to tell their origin stories. But what if the stone on your wedding ring is actually a blood diamond? Wouldn’t you want to know that? Knowing the origin and ensuring transparency from the “mine to the finger” can not only help you sleep better, but it can also save lives.’

Pandora and Tiffany & Co were the only two of 15 global jewellery giants to score ‘strong’ on HRW’s 2020 Responsible Sourcing ranking. ‘Our customers deserve to know that a Tiffany diamond was sourced with the highest standards, not only in quality but also in social and environmental responsibility,’ according to Anisa Kamadoli Costa, Tiffany & Co’s chief sustainability officer. ‘We believe that diamond traceability is the best means to ensure both.’

In 2021 New York-based Nano Innovator Holdings (NIH) launched a prototype platform that uses nanotechnology applications for end-to-end identification of rough and polished diamonds . The system uses laser technology to place a proprietary tag under the diamond’s surface, without changing the diamond’s clarity or colour.

Soon after, Russian diamond giant Alrosa announced a similar nanomarking technology, which cannot be destroyed or polished off. The tech was developed with the assistance of the Russian Academy of Sciences, the Yakutniproalmaz Institute, and Alrosa’s own Research Geological Enterprise. It uses laser nanomarking to imprint a three-dimensional code inside the crystal lattice, across the atomic structure of the entire diamond, making the mark invisible without a scanner. That code is linked to the Alrosa Provenance platform, which holds in-depth information about the diamond’s origin and characteristics.

‘Guided by growing market demand, we are focusing our efforts on tracing and guaranteeing the origin of our diamonds,’ according to Alrosa CEO Sergey Ivanov. ‘As the world’s largest vertically integrated diamond-mining company, Alrosa is in a unique position – with access to the full cycle of manufacturing, we have all the necessary information about our polished diamonds and the rough diamonds from which they were cut. By purchasing jewellery with a diamond protected by a nanomark, the buyer can be sure that it was actually made by Alrosa. The three-dimensional code embedded in the diamond is linked to its unique identifier and digital passport on the company’s database, which also includes details of the socio-economic benefits associated with its production.’

The last part of that quote hasn’t aged well. In 2022, Western firms (including Tiffany & Co) suspended sales of Russian diamonds, with Alrosa – which mines at least 90% of Russia’s diamonds, and which is the world’s leading diamond miner by volume – finding itself in the conflict-diamond crosshairs. The company is part-owned by the Kremlin, so sales of its sparkly gems help to (albeit indirectly) fund Russia’s invasion of Ukraine. Its nanotech brand of authenticity soon became a mark of shame. Yet that’s exactly the point. 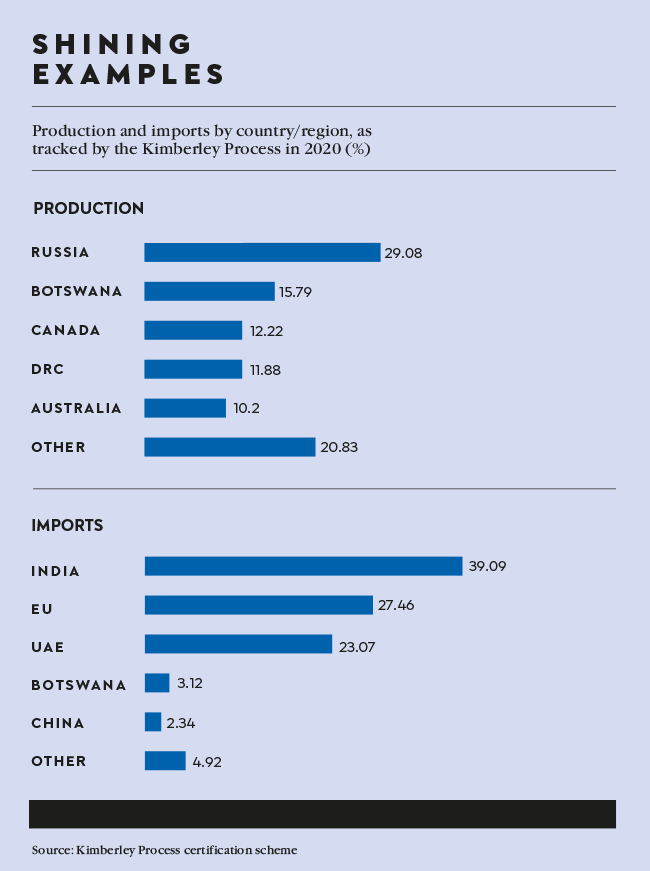 De Beers, the world’s second-biggest diamond producer, reacted quickly, with CEO Bruce Cleaver telling Reuters that it was stepping up its traceability efforts to prove to Western customers that its stones don’t come from Russia. ‘Traceability and pipeline integrity are going to be the things that get accelerated out of the Russia-Ukraine war,’ Cleaver told the agency. ‘We’re in good shape to be able to prove that to our consumers. We’ve been working on provenance for 20 years.’

De Beers has its own history with conflict diamonds – as do all diamond producers. Unlike other minerals that are bought and sold in bulk, gemstones are small and notoriously easy to smuggle. In places such as Kenya’s Taita-Taveta county, deals worth millions of dollars are done in cars and hotel rooms without attracting any attention. Those undocumented, under-the-radar sales are, obviously, untaxed.

‘Traders in gold, diamond, silver, emerald and other minerals have always flouted the mining laws and management of inventory reserves. There have also been scuffles during the construction and handing over of mining sites,’ Frank Deya, chief operations officer of software company Aeternity Hub Africa, told Kenyan publication the Nation. Blockchain, he says, is the solution. Blockchain technology provides secure, immutable, time-stamped records at every point in the supply chain.

About 25% of De Beers’ production is currently tracked by blockchain, enabled by its Tracr platform, which provides provenance assurance by tracing the gem’s journey all the way from source to store. Tracr was launched in 2018 (Alrosa was among the first to join) and – given the unique challenges of 2022 – is now being deployed at scale.

The platform combines distributed-ledger technology with advanced data security and privacy, which gives participants control over the use of their data. As each participant has their own distributed version of the platform – their data can only be shared with their permission, and only they can choose who gets to access their information.

Tracr is decentralised, which ensures speed and scalability. De Beers claims to be able to register 1 million diamonds a week on the platform. De Beers’ Sightholders – a select group of diamantaires that have high levels of ethical accountability – have sight of every one of them.

‘De Beers discovers diamonds with our partners in Botswana, Canada, Namibia and South Africa and, with our long-term investment in Tracr we are proud to join with our Sightholders to provide the industry with immutable diamond source assurance at scale,’ says Cleaver. ‘Tracr, which will enable the provision of provenance information from source to Sightholder to store on a secure blockchain, will underpin confidence in natural diamonds and represents the first step in a technological transformation that will enhance standards and raise expectations of what we are capable of providing to our end clients.’

Conflict diamonds won’t be taken out of the market entirely. That much is clear. But with unalterable, decentralised blockchains and nanomarks now tracking most of the world’s diamond inventory, the industry is taking a giant step towards ensuring more transparency.

African women working in the investment arena have received a US$60 million... END_OF_DOCUMENT_TOKEN_TO_BE_REPLACED

Zimbabwe is growing its status as a battery-minerals hub. The country has... END_OF_DOCUMENT_TOKEN_TO_BE_REPLACED